The True Costs Of Being A Witch

The only rule in witchcraft that truly matters is “know thyself.” If you feel your witchiness in your bones, then all your efforts to deny it will be very expensive. As long as we remain in denial, our shadow self reigns supreme. This has been the major struggle of my life. I didn’t necessary want to be seen as a mad/evil woman who summoned spirits. I carefully constructed a shadow-life of lies. One day, the cost for maintaining this facade simply became unbearable. If you’re new to truth-walking, know that this is a process that can take years to achieve. It is often the great work of the witches’ life.

Cost #2: Letting Go of the Past

Related to #1, letting go of the past can be a hefty price for some of us. We want to cling to our painful stories because they’ve defined us. However, there is that still small voice whispering, “you are so much more than your past.” Bury it, burn it, cut those cords. As long as we continue to cling to what others did to us, we will never fully be standing in our sovereign power.

Looking to others for validation is not the way of the witch. A very real toll that many of us have to pay is in the false relationships we maintain as long as we deny our truth. Like Dr. Seuss wrote, “those who mind, don’t matter and those who matter, don’t mind.” I can’t even count the times I’ve heard of others complaining about how their family doesn’t accept who they are. Neither does my extended one. I’ve lost so-called friends because I chose to accept my calling. You know what? My life is 100% better without them in it. I know it’s scary to face being alone, but a witch is never solitary. She has the spirits and deities she knows to keep her company. The other amazing thing is that when we sacrifice toxic relationships with people who don’t accept us for who we are, we create the space for amazing new people to enter our lives. Almost like magick.

Cost #4: Ignorance Is Not Bliss, It’ll Get Us Burned

Let’s get something crystal clear: if you are a witch you must accept the mantle of the past. Witchcraft, until the last century, was illegal. The current freedom of religion and practice we have came with a huge price. Legislation freed us from persecution. If you think that witchcraft isn’t political, then you are entirely wrong. Being a witch comes with the price of embracing the fight for equality. Witches’ rights are human rights. Witchcraft is inherently feminist. Think those horrific anti-abortion laws have nothing to do with witchcraft? Think again. When politicians begin to attack women’s basic rights, they’ve opened the door to re-establishing anti-witchcraft laws. They won’t stop until women, and other marginalized groups, have all their newly-found power stripped.

I wrote earlier about how I struggle with not wanting to dictate to others how to practice witchcraft, that personal choice is important. However, ignorance is a non-negotiable. It’s those casual witches who claim witchcraft isn’t political who will be the first in line to lock us up. As soon as being a witch becomes uncomfortable, they’ll turn on us. The next burning times is only one spark away. Be aware.

Being a witch should be uncomfortable. Not all the time, but the witches’ journey is inherently one of personal growth. It is awakening to all that wonders of the world. Listening to spirits. Connecting with the forces of nature. All this awakening means that we can feel way too much. The only way we are transformed is through struggle. That’s just how it works. Giving up lies, the past, toxic relationships and ignorance is massively uncomfortable. Taking the risk of living a life that’s true to you is uncomfortable. You may be rejected by others. Some people might think you’re crazy. But here’s the thing, this sort of discomfort is actually comfortable when you are living your truth. Not easy, but worth it.

This is where self-identified empaths get into so much trouble. They, or more accurately their shadow selves, crave that comfortable numbness. To not know what it is to feel, whether within ourselves or when we pick up on the thoughts of others. Listen to me: being able to feel is a huge gift, not a curse. Of course, it can be incredibly overwhelming at times. The cure for this is to know and maintain your boundaries.

Well, I can’t say that I agree with the above statement, but I do believe that being a witch is an active pursuit of our truth. It’s about standing in our sovereign power. For many of us that entails the high price of healing. Idleness is a toll of being a witch. We have to lay it down on our altar, instead choosing to actively create a life that speaks truth to us. I can’t even believe that lazy witchcraft is a thing these days. It’s offensive. I’m not talking about occasionally take the easy way out when casting a spell or skipping a Dark Moon ritual honoring Hekate. No, I’m referring to those who don’t want to do the work required ever. Do what you can given your circumstances. Build in a daily practice. Refuse to let your shadow convince you that you would rather watch another episode of Sabrina instead of doing your meditation. On the other hand, know yourself well enough to realize when you need a break.

Cost #7: Certainly, Certainty Is A Cost

This is where the difference between being a witch and practicing it as a modern pagan religion becomes clear. Religion is about buying into a doctrine that promises a certain outcome. In Christianity, the goal is getting into heaven. Do these things and all will be well. Being a witch means giving up this certainty. It’s about learning to accept what cannot be controlled to free us up to work on what can. It is about adapting and changing given the demands of a situation. 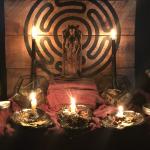 May 6, 2019
Summoning Hekate And Her Sacred Fires With A Ritual On The May Full Moon
Next Post

May 18, 2019
Recent Comments
20 Comments | Leave a Comment
"Cyndi, that was amazing! I really needed to hear all of that! I'm only just ..."
Chris Ayers Leaning Into Hekate’s Crossroads During COVID-19
"I just found this post 2 years later and I’m going through my spiritual awakening/rebirth. ..."
Spookybookie The Witch Reborn in Autumn: Spiritual ..."
"There seems to be no ritual attached via the link. I'd love to see it ..."
PPingrey Meeting the Wise Woman of Winter: ..."
"Imagine in 100 or 200 years what tripe from our popular culture will have stood ..."
JenniWest Welcoming The Witches’ New Year With ..."
Browse Our Archives
Related posts from Keeping Her Keys