What a Pity: No More Christian Bookstores

Christian bookstores were an important part of my Christian growth. I used to love to scour the books on the shelves in Christian bookstores. And I often struck up a relationship with store owners or employees. Sure, I shopped at secular bookstores, too. But I bought most of my theological books at Christian bookstores. It was an education that I got in no other place–thumbing through books that presented varying theological positions. I didn’t get that in my church. It proclaimed a certain theology without considering the theology of other churches that differed from it.

My frequenting Christian bookstores was similar to my visiting a seminary library, which I later did a lot, and that was even better. But you don’t buy books at a seminary library unless they also have a bookstore. And most towns and cities don’t have a seminary. And they may not have the latest and greatest bestseller.

Barnes & Noble is still treading water. They’ve been trying to sell out for years. Borders Books and Music was one of the casualties. So was B. Dalton and Waldenbooks, both of which were often in large malls.

People thought digital books–i.e., electronic readers with their e-books–would be the culprit. But despite the convenience of reading on a Apple iPad or the like, digital reading is sputtering so that it’s happening mostly in fiction. People still like the feel of a printed book and other amenities it provides.

Experts thought academic books for college students would all go digital. But they have been surprised that, now, digital has only about 10% or less of the academic market. Students say there are many disadvantages to reading textbooks digitally. Surprisingly, the big academic publishers refused to lower their book prices much, if at all, for digital books compared to printed books.

Another problem for book publishers and bookstores is that fewer Americans are reading books per capita of population. Surveys indicate that barely over half of adult Americans read one book per year. It’s partly due the competition of television and the internet. Yet an increasing percentage of Americans are getting college degrees, with over half of women now getting these diplomas. 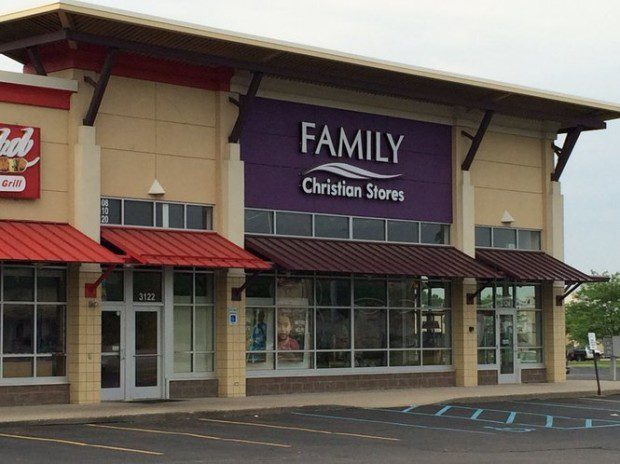 Family Christian Stores is the largest Christian bookstore chain in the U.S. They claim to be “the world’s largest retailer of Christian-themed merchandise.”They have 266 stores in 36 states, and they’ve been in business for 85 years. They employ over 4,000 people and have been a nonprofit since 2012.

Last month, Christian Family Stores announced they are folding up shop after having filed for bankruptcy protection in 2015. Christian book publishers tried to help then by forgiving Family Christian Stores a whopping $127 million. But even that didn’t help. They then spent money trying to improve their product selection and make their stores more appealing, but that didn’t do it either.

I think Family Christian Stores made a big mistake by recently expanding into film making, with their first film based on the book 90 Minutes in Heaven. It’s about a true story of a pastor named Don Piper almost dying from a head-on automobile collision and claiming to have gone to heaven during unconsciousness. I think the Bible does not support such an experience. That is, no one goes to heaven, as Jesus said in John 3.13 except himself.

BTW, naming it Family Christian Stores was another mistake. That name signifies a narrowing of clientele. Moreover, it actually discriminates against single people, just as a church does by advertising itself as “a family church.” Over half of adult Americans are single. And it is single people who have more time to read books and visit bookstores. Plus, single Christians are often looking for Christian fellowships that can meet their needs whereas churches have programs that meet family needs and create an atmosphere in which families create fellowship. It just happens whereas it doesn’t happen so easily with singles. Christian bookstores could have been trying to meet this important need.

The second largest Christian bookstore chain in the U.S. is the Southern Baptists’ LifeWay Christian Resources. It has 185 bookstores in 29 states. They are still hanging on.

But I don’t think online marketing is the only reason Christian bookstores are going out of business. I think they blew it a long time ago. The main reason is that they didn’t create a reading community that would meet at their store. This idea caught fire during the 1960s and 1970s with coffee houses, some of which that sold books. Some churches got into the act. But it was short-lived. No doubt that demise occurred for some reasons I am unaware. Of course, the store would have to provide enough space for people to gather.

The article, “The Demise of the Christian Bookstore,” published on 2/27/17, says, “While book sales are migrating largely to the Internet, there is still something to be said about physical stores…. The number of independent secular bookstores around the country is growing, while the number of Christian bookstores is declining.” The author says the main reason for this difference: “General market indie [independent] bookstores have embraced the indie author, Christian bookstores have not” (emphasis hers). She explains, “Bookstores that embrace indie authors and their events find that these authors bring the community to the bookstore. These community members come for the indie author event, but they also buy other books. Increased foot traffic equals increased sales.”

I have been saying this for decades. Christian bookstores should have been creating community and getting authors as speakers. Christian book readers need community, and they need it to be more well-rounded than only with their church members.

So, I think the primary cause of not creating a reading community at Christian bookstores is lack of vision and boldness of leaders in the industry. For example, if I owned a Christian bookstore I would get authors in there who would speak about their books. Then print flyers that inform about the speaking schedule. I’d certainly do that for local authors. Instead, whenever I have spoken publicly about a new book I’ve written, it usually has been in a secular bookstore where I asked for it. Isn’t that interesting; I could get speaking engagements in my local Barnes & Noble bookstore, but not the local Family Christian Store located only three miles from where I live.

But the main thing I’d do at a Christian bookstore is have debates. Get two people to debate some issue, such as the thesis of a bestselling book or two books that oppose each other on some topic. Thus, the debaters don’t have to be authors. Where does that happen? It doesn’t happen at churches, which are only interested in proclaiming their own viewpoint.

That’s the biggest problem with Christianity. In my opinion, most churches get too narrow in their theology. Plus, they have a membership program, which I think is non-biblical and detrimental to the primary Christian message, which is the love and unity of brethren through faith in Jesus Christ. There should be more freedom in churches to for people to hold varying opinions on matters unessential to God’s salvation.

I wonder if Christian bookstores have ever tried getting local churches to provide financial support as a partner-member, and then provide a venue at the bookstore for those churches to provide speakers who debate some topic upon which member churches disagree. Thus, it would be a public event in which churches would have to defend their position in debate.

I think churches should be required to defend their theology or ecclesiology among themselves in debate, thereby being accountable to the overall Christian community. Something like a Christian bookstore would offer a neutral location for doing this.

But then, I think all pastors and any others who speak to church congregations should be accountable to the flock for what they say, in which dissidents should be allowed to speak. We all should be prepared to defend what we say according to the Bible. But then, that is getting into a whole other can of worms.

March 11, 2017 Millenials Are Quitting Church Because It's Too Parochial
Recent Comments
0 | Leave a Comment
Browse Our Archives
Follow Us!