Did Jesus Preexist as “the Angel of the LORD”?

The most mysterious and enigmatic figure in the Old Testament (OT) is “the angel of the LORD.” This expression occurs 56 times in the OT, and “the angel of God” occurs 10 times therein. This “angel of the LORD/God” appeared to Abraham, Hagar, Isaac, Jacob, Manoah and his wife, Moses, Joshua, and many others.

There has never been any consensus in Judaism about the identity of “the angel of the LORD/God” in its Bible. The three, eminent, rabbinic, Bible commentators in medieval times interpreted it as the “angel” of Exodus 23 and 33. Therein, God said he would send this “angel” to guard Israel on its way to the promised land and taking possession of it. Many Jewish scholars have identified this angel as the captain of God’s angelic armies. Some claim he is Michael the archangel. I believe all of these proposals are correct.

Justin Martyr, a 2nd century church father, trumpeted this interpretation more than anyone. In his Dialogue with Trypho, a seemingly fictitious Jew, Justin frequently calls Jesus “the Angel.” The church later condemned such an identification. In fact, the author of the New Testament (NT) book of Hebrews tries strenuously to prove that Jesus is superior to angels–so that he could not have been an angel–describing Jesus as “having become as much better than the angels” (Hebrews 1.4). 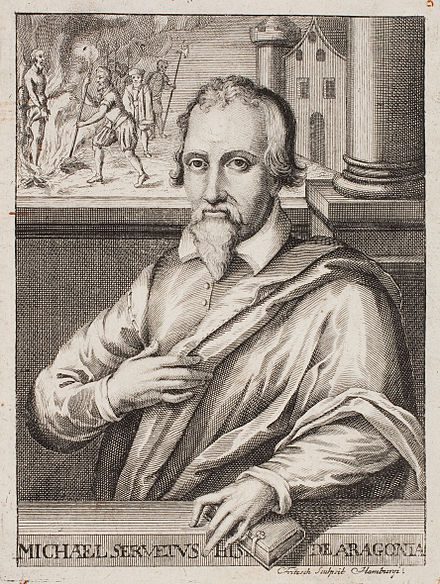 (The State of Switzerland, however, only acquiesced to their charges that Servetus denied infant baptism and the doctrine of the Trinity. So, the state burned him at the stake for these two charges. The pseudonym on my book, The Restitution of Jesus Christ, is Servetus the Evangelical. It is taken from Michael Servetus’ last name because we had beliefs in common.)

Consequently, my friend James D. G. Dunn explains that “the angel of Yahweh is simply a way of speaking about Yahweh himself.” Yet I think these texts can be understood as an actual angel serving as Yahweh’s agent and therefore sometimes seeming to be Yahweh himself when in fact this “angel” is only Yahweh’s agent.

So, the three primary interpretations of “the angel of the LORD” in the OT are that this figure depicts Yahweh himself, the preexistent Jesus Christ, or an actual angel.

Some OT narratives relate that Israelites literally saw “the angel of the LORD.” Even Balaam’s donkey did (Numbers 22.25, 27). These texts include conversations between the angel and people. Some texts identify the figure as “a man” who is at first mistaken as a man. (The Bible records many other events in which people literally saw and conversed with an “angel(s),” and some of these narratives describe the angel(s) as a “man/men.”) Other narratives tell that “the LORD appeared” without mentioning an angel. In such instances, “the angel of the LORD” probably should be presumed.

For example, Jacob wrestled all night with “a man” (Genesis 32.24). Jacob sensed his supernatural status and asked him for a blessing. When he gave it and departed, Jacob exclaimed, “I have seen God face to face, yet my life has been preserved” (v. 30). I think it most likely that this was an actual angel. Whenever angels are mentioned in the Bible and given any description, it is never other than appearing as a man. This is one of the reasons I think the “us” in Gen 1.26 should be understood as God and angels.

The first biblical clue that “the angel of the LORD” in the OT is not Yahweh himself is that some of these narratives tell about people literally seeing him and thereafter worrying that they would die because they believed that no human being could literally see God and live. Indeed, the Bible well attests to this as true (e.g., Ex 33.20; John 1.18; 6.46; 1 John 4.12, 20. In Isa 6.5, the prophet saw only a vision.). It is because God is unapproachable by mortal humans, dwelling in a glorious light, thus being “invisible” to them (Psalm 104.2; 1 Timothy 1.17; 6.16). Similarly, theologians describe God as “transcendent”—existing beyond the material universe.

The best evidence about the angel of the LORD in the OT being distinguished from Yahweh is narratives in which these two communicate with each other about each other. It occurred when King David sinned by numbering Israel, and the angel appeared to him with raised sword for judgment (1 Chronicles 21.15-16; 2 Samuel 24.15-16). When David offered a sacrifice, “the LORD commanded the angel, and he put his sword back in its sheath” (1 Chronicles 21.27). Another time was when Yahweh and his angel spoke to each other in Zechariah’s vision of four angels riding horses to patrol the earth (Zechariah 1.12-13).

The most important OT texts about the angel of the LORD, without the LORD being mentioned, are those that tell about God informing Moses that he was going to “send an angel before you to guard” Israel, making him Israel’s guardian angel (Exodus 23.21-23; 32.34; 33.2).

There is a progressive revelation in biblical narratives containing the expression “the angel of the LORD/God” and some other texts in the OT which are clues leading to the identity of this figure. Therefore, esteemed Old Testament scholar Gerhard von Rad rightly concludes, agreeing with some rabbis, “Michael [the archangel] is the guardian angel of Israel.” The evidence can be summed up as follows:

In my book, The Restitution of Jesus Christ, I devote 17 pages to an examination of “the angel of the LORD” in the OT.

April 28, 2017 Pope Francis Visits Egypt
Recent Comments
0 | Leave a Comment
"Scribe, your statement is difficult to follow, though this is a complex subject. Dispensationalism has ..."
kzarley Paul’s Intertextuality about the Antichrist: Part ..."
"Warmongering liberals want America to intervene once again. Go fight Russia by yourself."
Iconodule Ukraine Crisis Update
"Historic premillennialism adherents believe that the present age of the Church coincides with the present ..."
the old scribe Paul’s Intertextuality about the Antichrist: Part ..."
"Be Healthy Be WellStay safe"
tzatz Paul’s Intertextuality about the Antichrist: Part ..."
Browse Our Archives
get the latest updates from
Kermit Zarley Blog
and the Patheos
Progressive Christian
Channel
POPULAR AT PATHEOS Progressive Christian
1