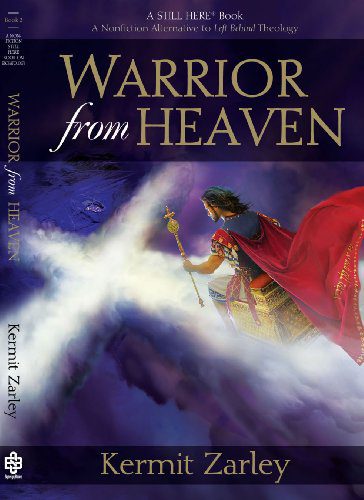 In my last blog post (“Joy and Peace at Christmas“), I ended it by saying provocatively, “My next blog post, I’ll tell WHEN Jesus ‘will come’ back . . . . But really, I’ve already told when in this post. Can you figure out this riddle and what it means?”

In the previous paragraph, I quoted from the Apostle Peter’s famous speech on the Day of Pentecost in which he quoted Ps 110.1. It says, “The Lord said to my Lord, ‘Sit at my right hand, until I make your enemies your footstool'” (Acts 2.34-35). Peter applies to this Jesus. Thus, the first “Lord” refers to God, and the second “Lord” refers to Jesus. (Peter quotes from the LXX. The psalm itself says, “The LORD said to my lord.”) Peter means that when Jesus ascended to heaven (Acts 1.9-11), God invited him to sit with him at his right hand on his heavenly throne.

(This is not the place for me to defend against pacifism. See my book entitled Warrior from Heaven, which is about Jesus’ second coming. I lived over 25 years in Friendswood, Texas, a small town founded by Quakers. [Quakers prefer the label “Friends” rather than “Quakers,” a derogatory label attached to them by outsiders.] Quakers are the most renown Christian group for being pacifists. Quakers are good, loving people. And I have had a number of Christian friends who are pacifists but not Quakers. I don’t believe pacifism can be reconciled with the Bible. Yet, when I served in the U.S. Army and the Air Force, I chose to be a medic because, given a choice, I’d rather save lives than kill.)

Some background about Ps 110.1 is helpful in learning what “until” therein means. In the classic Keil-Delitzsch, ten volume commentary on the Old Testament–an oldie but still goody–German scholar Franz Delitzsch says David was inspired to write Ps 110 due to his experience in war. David’s victory on Mount Zion served as a type of God establishing his Messiah Jesus on Mount Zion as victor over his enemies.

That is indeed what Jesus will do at his second coming. But for many Christians, the peace-loving, turn-the-other-cheek Jesus of his first advent does not square with Jesus being a warrior-king at his second coming. This is because they do not understand that although both God and Jesus are loving, they also advocate justice. And people do not understand how bad it is going to get for people who believe in God through Jesus.

The Bible clearly predicts that a very evil man–whom Christians have rightly called “the Antichrist”–will arise in the last days of this age. Daniel had a vision about it. He explains that this Antichrist “made war with the holy ones and was prevailing over them” (Dan 7.21; cf. 8.24b; Revelation 12.17). These holy ones will be a powerful lot because Daniel adds, “He shall destroy the powerful and the people of the holy ones” (Dan 8.24b; cf. Rev. 13.7).

The author of the book of Revelation calls this final Antichrist “a beast” and predicts he will require everyone to worship him and an idol depicting him. We read of this idol, “the image of the beast could even speak and cause those who would not worship the image of the beast to be killed” (Rev 13.15). Plus, everyone must have the mark of the beast, or number of his name, on their forehead or righthand in order to buy and sell in the marketplace (vv. 16-17). So, the Antichrist will have millions, if not billions, of people put to death. That calls for some serious justice coming from heaven.

Isaiah prophesies much about the Messiah, but oftentimes under different rubrics. Isaiah’s most prominent is in Isa 40-55 about the righteous, suffering Servant of God (Yahweh). One portion says of Yahweh’s Servant, “How beautiful upon the mountains are the feet of the messenger who announces peace, who brings good news [=gospel], who announces salvation, who says to Zion, ‘Your God reigns'” (Isa 52.7). This is Isaiah’s first mention of Messiah’s feet. Of course, it is about his first advent.

Isaiah’s second mention of Messiah feet is implied in Isaiah 63. This text inspired the American Julia Ward Howe to write “The Battle Hymn of the Republic.” Isaiah begins with a Q&A between himself and this Servant which reads, “‘Who is this that comes from Edom, from Bozrah in garments stained crimson? Who is this splendidly robed, marching in his great might?’ ‘It is I, announcing vindication, mighty to save.’ ‘Why are your robes red, and your garments like theirs who tread the wine press?’ ‘I have trodden the wine press alone, and from the peoples no one was with me; I trod them in my anger and trampled them in my wrath; their juice spattered on my garments, and stained all my robes. For the day of vengeance was in my heart, and the year for my redeeming work had come. .  . I trampled down peoples in my anger, I crushed them in my wrath, and I poured out their lifeblood on the earth'” (Isa 63.1-4, 6).

Many Hebrew prophets predict that at the very end of the age, the Antichrist will lead the nations’ militaries in a massive assault on the nation of Israel. Zechariah the Prophet tells the most about it, saying it will come to an end when Messiah’s feet stand on the Mount of Olives at his second advent. Zechariah says on behalf of Yahweh, “I will gather all the nations against Jerusalem to battle, and the city shall be taken and the houses looted and the women raped; half the city shall go into exile, but the rest of the people shall not be cut off from the city. Then the LORD will go forth and fight against those nations as when he fights on the day of battle. On that day his feet shall stand on the Mount of Olives, which lies before Jerusalem on the east” (Zech 14.1-4). The feet refer to those of Messiah, since he is Yahweh’s agent.

Finally, the author of Revelation writes of that end time, “Then I looked, and there was a white cloud, and seated on the cloud was one like the Son of Man, with a golden crown on his head, and a sharp sickle in his hand! . . . So the one who sat on the cloud swung his sickle over the earth, and the earth was reaped” (Rev 14.14). Two angels are involved with him. One says to the other, “Use your sharp sickle and gather the clusters of the vine of the earth for its grapes are ripe” (v. 18). These “clusters” refer to the nations’ militaries that have assaulted Israel. We read next, “So the angel swung his sickle over the earth and gathered the vintage of the earth, and he threw it into the great wine press of the wrath of God” (v. 19).

The Prophet Joel tells where this wine press is located. It is in the Kidron Valley, which is also called the Valley of Jehoshaphat. It runs north and south between the Temple Mount in Jerusalem on the west and the Mount of Olives on the east. Joel speaks on behalf of Yahweh, “Come quickly, all you nations all around, gather yourselves there. Bring down your warriors, O LORD. Let the nations rouse themselves, and come up to the valley of Jehoshaphat; for there I will sit to judge all the neighboring nations. Put in the sickle, for the harvest is ripe. Go in, tread, for the wine press is full. The vats overflow, for their wickedness is great. Multitudes, multitudes, in the valley of decision! For the day of the LORD is near in the valley of decision. The sun and moon are darkened, and the stars withdraw their shining. The LORD roars from Zion, and utters his voice from Jerusalem, and the heavens and the earth shake. But the LORD is a refuge for his people, a stronghold for the people of Israel” (Joel 3.11-16).

The author of Revelation finishes his prophecy mentioned above–about the Son of Man Jesus and the two angels–by adding, “And the wine press was trodden outside the city, and blood flowed from the wine press, as high as a horse’s bridle, for a distance of about two hundred miles” (Rev 14.20). The flow of water from Jerusalem, around the Mount of Olives, to the Dead Sea, and south through the Dead Sea and Arabah to the Gulf of Aqaba, measures about 200 miles.

In conclusion, Jesus’ enemies will be made a footstool for his feet when God causes the Antichrist and the nations’ armies to besiege Jerusalem and especially gather in the Kidron Valley to become a wine press beneath Jesus’ feet.

December 16, 2018 Two Loves Are Better than One
Recent Comments
0 | Leave a Comment
"Lev Parnas is Jewish, so I'm not sure what this has to do with evangelical ..."
Sean Are Evangelicals in a Cult?
"Emperor Constantine wanted to unify his empire. The Romans already had a time of celebration ..."
Nick Hassan Should the Catholic Church Abolish the ..."
"It’s clear that the god described in the Bible has conditions that need to be ..."
Arwen Undomiel Is Unconditional Love a Biblical Concept?
"‘Not by might nor by power, but by My Spirit’, says the Lord of hosts ..."
Nick Hassan List of All Posts About Jesus ..."
Browse Our Archives
Follow Us!