Pence Says Him Testifying Against Trump Would Be “Unprecedented” 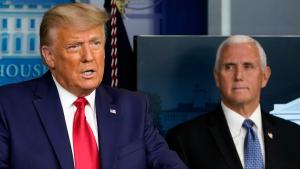 Former Vice President Mike Pence spoke at a political event in New Hampshire today in which he responded for the first time to the question of whether he would testify before the select committee investigating the January 6th Capitol riot. The committee has held eight public hearing so far which were televised, and these hearings succeeded in providing much information to the public about that horrendous event which threatened our democracy. And the committee plans to resume these hearings shortly. The public would like Mike Pence to appear before the committee to answer some important questions.

The main thrust of Pence’s speech today was his defense of the FBI in searching former President Donald Trump’s residence at Mar-a-Lago in Florida for “secret documents” that Trump removed illegally from the White House when he departed it. The FBI removed several boxes of documents on two different occasions. The second occasion, which occurred over a week ago, was unannounced and Trump was not there. Thus, some Republicans are improperly calling it a “raid” and issuing even threats to the FBI.

Pence said of a committee invitation to him to testify, which it thus far has not done, “If there was an invitation to participate, I would consider it.” But he cautioned that it would be “unprecedented in history.”

Mr. Pence, it was “unprecedented in history” when the former guy, your boss, reportedly said in the White House when he saw live on TV the Capitol rioters yelling “Hang Mike Pence” because you would not decertify the election results, that “Mike Pence would deserve it” if you literally were hanged until dead, or words to that effect. C’mon Mike, how dumb do you think we the public are? U.S. President Donald Trump was way “unprecedented in history.”

Mike, you need to go the Hill and testify. Forget executive privilege if there were crimes committed by your boss. As a lifelong evangelical like you, I would venture to say it is your Christian duty to do so, to speak truthfully, and to tell what you know which the committee needs to know because most of the American public wants to know just to protect its democracy.

August 14, 2022
Will Zalantoris Wins the Memphis St. Jude
Next Post

August 19, 2022 Did Trump Take Secret Government Documents as a Bargaining Chip?
Recent Comments
0 | Leave a Comment
"At some point soon, Trumpo will be indicted. They cannot shy away from that for ..."
Michel The New MAGA
"Still defending the malignant Orange-Pig, even after all his crimes, treason, and EVIL have been ..."
The Zephyr 🇺🇲 <---> 🇺🇦 New Study Shows Republicans Misinform Way ..."
"MAGA - Many Are Getting Arrested"
Patrick The New MAGA
"My money is on 1) Saudis, and/or 2) Putin."
Barros Serrano Why Did Trump Take Classified Documents? ..."
Browse Our Archives
Related posts from Kermit Zarley Blog