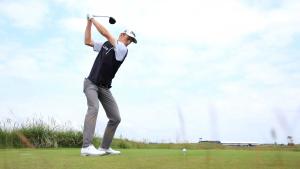 After knocking on the door all year, young sensation Will Zalatoris finally squeezed through the doorway minutes ago to win his first PGA Tour tournament–the FedEx St. Jude Championship at Southwind TPC in Memphis, Tennessee. But, like all those close calls this past year, in which he kept losing by one stroke in four runner-ups, it wasn’t easy.

Will Zalatoris and Sepp Strack tied for 72 holes of regulation play this afternoon with 15 under par totals of 265. Zalatoris forced a sudden death playoff by sinking his ten foot par putt on the 72nd hole. When he did, he let out an emotional yell, saying something we viewers couldn’t discern due the roar of the crowd. We learned afterwards that he yelled, “What are they gonna say now?” He explained that he is a an NBA Warriors fan, being from San Francisco, and MVP Stef Curry had said that during the Warriors’ winning the finals of the NBA Championship this year. Zalatoris also yelled it out of frustration of missing some putts in the clutch during those runnerups, and he was being criticized for it by fans if not media. Pro golfers absolutely hate being thought of as a choker under the pressure, and that’s what Zalatoris was experiencing.

On the first and second playoff holes, Zalatoris and Strack parred the 18th hole twice. The third playoff hole was conducted on the short par three 11th hole. Zalatoris played first and hit his ball to the right, flirting with a rock wall beside the green side water hazard. His ball bounced around about five times on top of the flat top of that rock or brick formation. It is only about one foot wide, with a straight-down drop-off into the water. His ball then came to rest on the inside edge of the top of the rock wall, nestled against slightly elevated grass turf, but still within the water hazard line.

Strack then struck the same type shot from the tee on this 148-yard par three rather than hitting safely to the far left side of the green. His ball landed on the bank and bounced into the water. Taking a one stroke penalty, he then played his third shot from the drop zone. His ball scampered over the green and into a sand bunker. Since Strack was still away, he played a good sand shot to four feet past the hole. So, he would need to make that putt for a double bogey five.

The lie of Zalatoris’ ball looked extremely questionable as to whether he could play some type of chip shot. The ball was only about twenty feet or less from the pin. Will pondered the situation for a long time. He even held the club head of his wedge close to the ball in various positions and approaches, trying to determine if he could hit a chip shot. I think a lot golf fans watching the television coverage probably were yelling, “Don’t do it, Will. Take the penalty.” Finally, he did lifted the ball, indicating he was taking a drop out of the water hazard and thus incurring a one stroke penalty. He walked back to drop zone, 92 yards from the pin. He then played a brilliant wedge shot to seven feet from the hole, safely on the left side, thus farther from the water.

Twenty-five year old Will Zalatoris–who attended Trinity Christian Academy near Dallas and Wake Forest University in North Carolina–has been quite a sensation this year on the PGA Tour. Yet, fans have kept asking, “When is this guy going to win a tournament?” He had been coming so close several times. Finally, he barely hit that seven-foot putt into the right side of the cup to end his agony of defeat and raise his arms in victory. Seconds later, Will hugged his fiancee very emotionally, shaking and shedding a tear or two.

Back on Thursday, Will’s girlfriend, Caitlin Sellers, had asked him what he would do on Saturday if he didn’t make the cut, since his 71 that day was outside the cutline of the low 70 players and ties. On the PGA Tour, that’s a question you’re not supposed to ask a pro. But the young ladies who are not avid golfers often don’t know the finer points of the game, that is, the psychology of it all. A pro doesn’t want to think negatively about what he will do that weekend if you misses the 36-hole cut on Friday.

Will handled the question magnificently. He answered, “Let’s cross that bridge when we get to it.” Sounds like Ms. Sellers has quite the winner there, in more ways than one, if you ask me. And I think the tall, slender, and blond Will Zalatoris is a cool guy who is going to make quite a mark for himself on the PGA Tour.

This tournament was the first of three consecutive tournaments that represent the grand finale of the PGA Tour season, called the FedEx Cup Playoffs. Only the players who made the 36-hole cut, and therefore continued playing this weekend, qualified for the second tournament of these playoffs, which will be the BMW Championship next week in Wilmington, Delaware.

And once again, golf fans are talking about how PGA Tour tournaments have so much more excitement to them than the disruptive competitor LIV Golf has provided so far.

August 17, 2022 Pence Says Him Testifying Against Trump Would Be "Unprecedented"
Recent Comments
0 | Leave a Comment
"At some point soon, Trumpo will be indicted. They cannot shy away from that for ..."
Michel The New MAGA
"Still defending the malignant Orange-Pig, even after all his crimes, treason, and EVIL have been ..."
The Zephyr 🇺🇲 <---> 🇺🇦 New Study Shows Republicans Misinform Way ..."
"MAGA - Many Are Getting Arrested"
Patrick The New MAGA
"My money is on 1) Saudis, and/or 2) Putin."
Barros Serrano Why Did Trump Take Classified Documents? ..."
Browse Our Archives
Related posts from Kermit Zarley Blog