A good friend of mine sent me the following note on Facebook the other day and with her permission I would like to open this conversation up to folks who are interested and willing to jump in.  Here is what she wrote:

Hey there. Sounds like you’ve had quite the month for online conversations, debates and dialogues. I’m sending this in a message because I don’t want it to get out of hand on a fb feed, but I have a genuine question: If you were going to use one marriage in the bible (or several marriages; I’m trying to keep this simple) as a model for contemporary marriage in the US, which case would you draw on? I wish I could actually ask liberals and conservatives alike — without sounding snarky and igniting a comment war. But since you’ve been listening/reading the [conversations] all month, I thought I’d let you channel them! I mean, I’m actually kind of stumped on this. Is there even one marriage, or one family, in the bible that we would want to embrace as a model? … Okay, maybe Mary, Joseph and Jesus — is that the nuclear family prototype? Are there any others? Don’t rack your brain over this. But really, I’m curious. Letitia

I don’t want to lead the witness or begin in a combative mode but I think some biblical facts might be helpful to frame the conversation. Here’s a graphical summary of what types of marriages I can find in the bible: 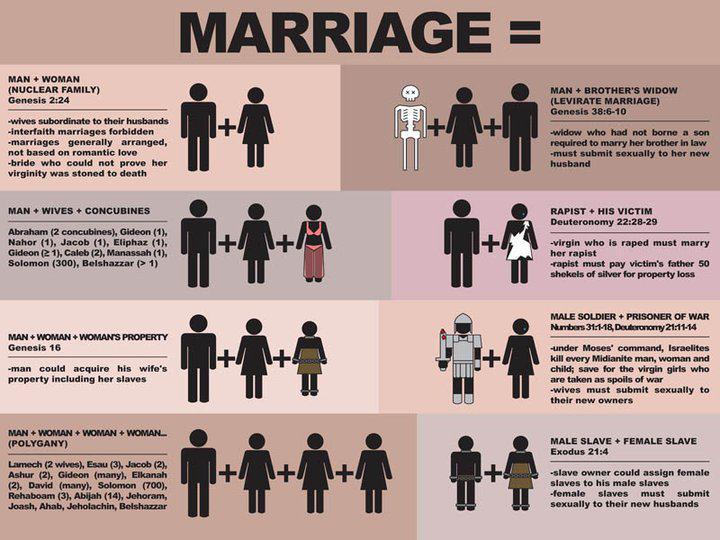 And because I deeply appreciate truth in humor (and AM snarky at times):

But just debating biblical models of marriage is not really at the heart of Letitia’s question.

Here’s what she added when we decided to open up the conversation:

I don’t assume that biblical stories and characters are necessarily the (only) source of authority on which people draw when they say something is “biblical.” We might want to say that marriage (or parenting, or friendship, or other kinds of relationships) should strive for aims and ends, embody values, and encourage virtues virtues that are at the heart of biblical texts: love, justice, charity, and so on. (Many liberals and feminists would take this tack, I think; I do.) But for some reason, when I hear appeals to “biblical marriage,” I assume that people mean marriage that follows the model of marriages that are actually described in scripture. Now, maybe this is a flawed (even uncharitable) assumption on my part. But it does lead me to reflect on the marriages and families we do see in scripture. I wonder: what do Contemporary Christians make of them? Do they figure at all into our visions of faithful partnerships, family life, sexual expression? And if so… how?

If I am reading her correctly, her question is: what biblical family do we do we embrace and lift up as the example by which to set our compass? What say ye?

July 29, 2012 Chick-Fil-A and Proverbs 25:21
Recent Comments
239 Comments | Leave a Comment
Browse Our Archives
get the latest from
Kimberly Knight
Sign up for our newsletter
POPULAR AT PATHEOS Progressive Christian
1

We've made God in our image, and we're...
Ever since Inauguration Day, Evangelical Christians have been declaring on social media...
view all Progressive Christian blogs
What Are Your Thoughts?leave a comment

239 responses to “Which biblical marriage?”