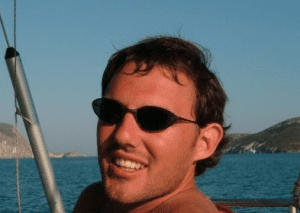 This guest post is by New Zealander Mike Cammock who is originally from Christchurch.  Mike has served a mission in Taiwan, and currently resides in Windsor, Vermont.  He and his wife Chris are the parents of two children.

My name is Mike Cammock.

I am a Kiwi. I am also Mormon.

I grew up on the South Island of New Zealand in Christchurch. I’ve served a mission, I married in the temple, I have two faithful parents and like them I aspire to a religious life. I am deeply inspired by Mormon theology, and ‘yes’ despite his present unpopularity I am compelled by many of the teachings of Joseph Smith. But now in my 30’s I have questions.

My American wife took a punt on a Kiwi boy and in 2008 she dragged me over the Pacific and across a vast continent where we ended up in Vermont. Living in the US means that I have had a front row seat to the “Mormon Moment”.  Its been wildly interesting and almost enjoyable, except for the fact that there has been a noticeable increase in previously ‘faithful’ card carrying Mormon’s leaving the church – many of whom have been my friends. But unlike other mainline Christians, who, having been disappointed by an aspect of their church experience generally seek out a new  church community – I’ve noticed that Mormon disaffiliation often results in a complete loss of faith and trust in God.

For instance, as members of the Church we are frequently taught that the most important charismatic experience we can have is a confirmation of the truthfulness of the Book of Mormon. This is, we are told, the keystone to gaining a testimony of Jesus Christ.

In the Jan 1988 Ensign Ezra Taft Benson proclaimed the following:

This process for discovering the truth of the Church of Jesus Christ of Latter-day Saints has been the framework of religious education for members and investigators of the Church for decades. Thomas S. Monsoon re-emphasised that this approach remains unchanged when he recently stated:

When we know The Book of Mormon is true, then it follows that Joseph Smith was indeed a prophet and that he saw God the Eternal Father and His Son, Jesus Christ.

It is obvious that in the LDS church, The Book of Mormon fulfils the critical role. It is not simply scripture that teaches value of the atonement and Christ-like living. Rather The Book of Mormon is the most essential proposition in a logical argument for the “Truth” of the institution of The Church of Jesus Christ of Latter-day Saints.

Consequently, from within the LDS paradigm, the most important religious experience that any person can have is the personal revelation that God endorses The Book of Mormon.

I believe that this conception of personal revelation is fundamentally flawed. It assumes that the purposes of God’s communication with his children over time  is primarily to prove some fact or epistemic truth in the world. Revelation is focused on revealing “fact” about some third party or object. This conceptualization of revelation diminishes the primacy of God communicating with us for our benefit alone. This conception of revelatory learning preferences epistemic, concrete, factual knowledge in Gods institution over the reality of our ability to directly and personally develop hope and faith directly through the experience of Gods love and grace.

Thus, rather than focusing on the primacy of our relationship with God our spiritual experiences have been captured primarily to serve religious purposes. As a consequence I’ve spent the last few years watching people give up on God because God in this paradigm can only be found in places occupied, inhabited and claimed by the LDS church.

And so I am left to ask myself, “How can I live up to the challenge to be an individually prophetic and a spiritually transformative person who lives autonomously through my faith in God, when every religious experience that I have as a Mormon is framed as evidence that affirms the truth claims of the institution”?

If the challenge of institutional faith becomes too hard for me, what ties have the church blessed me with that binds me to God irrespective of the religion of my birth? Or will I, like my friends give up on  religion, faith and divinity in one fell and disappointing swoop?   People will continue to the leave the church, but what vested interest does the church have in ensuring that should they decide to leave, they will stay bound to God or even seek out another faith community that is the best expression of their spiritual selves?

Sometimes the church feels like a jealous lover.  “If not me – then nobody.”

November 23, 2014
Anguished Musings on a Frayed Testimony
Next Post

January 1, 2015 The 15 Ailments of the LDS Church (With a hat tip to Pope Francis)
Recent Comments
0 | Leave a Comment
Browse Our Archives
get the latest from
KiwiMormon
Sign up for our newsletter
Related posts from KiwiMormon