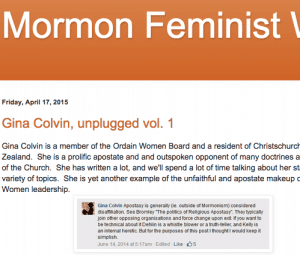 I’ve been in the blogging game for three years now.  I’m used to trolls and comment preachers who call me to repentance for my wickedly evil ways, blah blah blah.  I don’t really mind if they name themselves, even though the use of ad hominem is irksome I somewhat respect the fact that they stand by their comments – with an authentic identity.  Some are simply rude  and I tend to block them.  But most of us who are vocal with our concerns about Mormon culture take a regular hit – it *sigh* comes with the territory.

What I hate with an enormous fury are anonymous trolls.  People who shroud themselves in secrecy, hide behind fake identities, names and pseudonyms taking pot shots for the supposed good of the LDS church.   And this is never more apparent than when women ask for equality and identify institutional patriarchy and misogyny.

Lately a group who are the brain children behind OWexposed and Mofemwatch have been writing hit pieces on the Ordain Women Executive  Board.  They are a tiny site and they draw little attention – small fry in the bloggernacle really but they have terrible online manners and that’s just unacceptable – even, I expect,  for God.  They have  also shared personal and private information (doxed)  about known feminists.  I’m not sure what traction they hope to get because most of us on the board are happy to be named both for our position and our aspirations.  These people have violated social media vetting policies, squirrelled their way into closed groups and have taken screen shots of conversations – without permission and have assembled them in their posts  to supposedly ‘expose’ our ‘true’ apostate nature, while at the same time calling for our excommunication.

I don’t generally drive traffic to these kinds of websites – it gives people like this internet erections but sometimes sitting by waiting for the tide to pass is like consenting to your own sexual molestation.  So I’m speaking up because in every respect – this is behaviour unbecoming.

The LDS church’s albeit solitary comment on online harassment, anonymous bullying and Mormon trolling is good but perhaps not ubiquitous enough:

“One of your greatest protections against making bad choices is to not put on any mask of anonymity. If you ever find yourself wanting to do so, please know it is a serious sign of danger and one of the adversary’s tools to get you to do something you should not do. …

“Any use of the Internet to bully, destroy a reputation, or place a person in a bad light is reprehensible. What we are seeing in society is that when people wear the mask of anonymity, they are more likely to engage in this kind of conduct, which is so destructive of civil discourse. It also violates the basic principles the Savior taught.”3

The thing is, it’s hard to figure out their end game without dialogue.  If they have an opposition to women’s equality why not counter this with a robust argument?  Sadly it appears that the civil sharing of ideas is not what they want – they want those who advocate for women’s equality in the church  gone from the church in the manner of Sister Kelly.    But more than that my feeling is they want to use the cloak of secrecy to harass and bully to mask their fear.

As one of my friends remarked:

“He thinks he is helping the LDS cause, but as a fence-sitter I’m even more put off. He’s sounding like the thought police for all of Mormondom. If I wanted to be in a cult like that I’d just go Scientologist and call it quits.. if the Mormon God is represented by this weirdo, Xenu sounds much cooler..”

What bothers me most is that the threatening demeanour of these people has me concerned for the safety of those they have targeted including their children and families.   One source  has recently revealed to me  that one of the contributors to mofemwatch might be a registered sex offender who also has a profile at ‘I am a Mormon’.    The people that surround these trolls  are also concerning.  One supporter and troll for the recently banned Facebook site Ordain Women Exposed is an employee of the church.  I am informed that another informant of the author works for the church’s CES department.   All very disappointing from mine,  and I hope –  the church’s perspective.

If that be the case then no wonder the secrecy, but it’s still wrong, corrupt, cruel and cowardly.

Echoing Krista Tippett’s musing on  Martin Marty’s observation who “doesn’t divide the world into conservative and liberal.  He divides the world into mean and non-mean”  I agree that whatever our contribution to  building the Kingdom, being mean is uncool.  And make no mistake there’s a lot of mean in Mormon trolls.

May 3, 2015 Gloriavale and the Mormons: What New Zealand's latest religious drama has to teach us
Recent Comments
0 | Leave a Comment
Browse Our Archives
get the latest from
KiwiMormon
Sign up for our newsletter
Related posts from KiwiMormon