A friend recently shared an observation with me about lovers and critics of the church.  Hers was a reflection on a commencement speech at Cornell by John W. Gardner in 1968.  Gardner mused astutely:

Pity the leader caught between unloving critics and uncritical lovers.

Following the ‘Any Opposed’ action at General Conference this weekend wherein five members exercised their right to oppose  a sustaining vote of the First presidency and Quorum of the Twelve, Mark Atuaia, BYU Cougars coach tweeted the following: 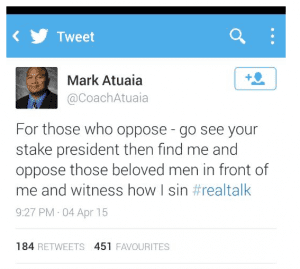 I’m sure he meant it as a show of loyalty to the Brethren, but it was misguided, bullying, unnecessary and ultimately unbecoming.

I can’t help wondering if the  uncritical lovers of the church are  currently Mormonism’s problem children, even more than the unloving critics?

“…twentieth century institutions were caught in savage crossfire between uncritical lovers and unloving critics. On the one side, those who loved their institutions tended to smother them in an embrace of death, loving their rigidities more than their promise, shielding them from life-giving criticism. On the other side, there arose a breed of critics without love, skilled in demolition but untutored in the arts by which human institutions are nurtured and strengthened and made to flourish.

Between the two, the institutions perished.

… men must be discriminating appraisers of their society, knowing coolly and precisely what it is about the society that thwarts or limits them and therefore needs modification. And so must they be discriminating protectors of their institutions, preserving those features that nourish and strengthen them and make them more free. To fit themselves for such tasks, they must be sufficiently serious to study their institutions, sufficiently dedicated to become expert in the art of modifying them.”

This is not to say that I’m letting the unloving critics off the hook, but they are a dime a dozen.  We’ve had them on the ride along with us since the beginning and we’ve got pretty good at ignoring them.   But what we aren’t good at is discerning the difference between unloving critics and critical lovers.

A critical lover makes a definitive call, where ever they are for our community to be healthier.  They pose hard questions, and they say hard things – but always with the intention of drawing us into some much needed communion with each other about how we can be differently better.

If there has ever been a need for a critical lover of the church, it is today,  it is right now.