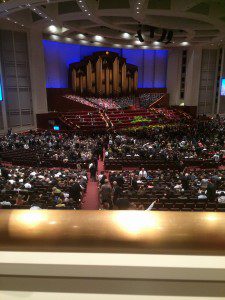 In an unusual move by the Church of Jesus Christ of Latter-day Saints three white males from Utah have been  called to fill the vacancies in the highest council of the church – the Quorum of the Twelve Apostles.

Over the last generation the church has grown considerably in African nations, it maintains a significant following in South America, the Pacific and in the Philipines.   This  diversity has put pressure on the church to maintain its Wasatch origins and the appointment of Rasband, Renlund and Stevenson is an important signal to the world wide membership  as to where its cultural roots belong.

“Sometimes it feels like the church is becoming unrecognisable.  I want to be able to go to church anywhere in the world and feel as though its like its going to church in Utah – so having Utah apostles is an important step.”  Remarked La Shane Peterson of Sandy.

“I think this is a good time to be reminded that the church is white.”  said Barbara Allred of Murray.  “Joseph Smith was white, Brigham Young was white, Jesus was white, and even God is white! If God wanted brown or black men as apostles He would have called them.”  She affirmed.  “So its saying something when he doesn’t – it means that God doesn’t see them as worldwide leaders .”  She was quick to add, “But that won’t hold them back in their spiritual progression.”

Stevenson and Rasband come to the positions with significant business and management experience.  As the LDS church expands its property and business interests this kind of acumen is central to the apostolic calling.

“Jesus has a rainy day policy,”  remarked a representative from the Church Office.  “That twaddle about His eye being on the sparrow was so Meridian of Time – these days God wants the church  to have a decent investment portfolio and the right people to grow it.”

“Renlund was an outsiders choice.”  Stated an anonymous source from the  Salt Lake City  based Mormon Bookies Collective.  “He’s a medical professional not a businessman.  How he’s used in the quorum will be interesting to watch.  Nelson has been important in providing much needed medical care to the ageing quorum members so perhaps this is a kind of rainy day medical policy for the top 12.”

Ordain Women profile holder Robin Decker said she was disappointed that no women were called to the top positions.  “It was a vague and pointless hope that a woman be called – or at least someone who understands what it means to be powerless in the church.”  She remarked tearfully.

Mormon Woman Stand supporter LaDonna Smith pointed out, “Women have their God given roles, and men have theirs.  Its always been that way and always will be.  Culture  and patriarchy  have nothing to do with gender roles and if we listen to the men in the church who have been called to lead us there should be no argument about that fact.”

While spokespeople from some racial minority groups  in the church have expressed some disappointment that the diversity of church isn’t captured in the demographics of the top leadership most of the church seems  jubilant.

“I don’t think it matters where our leaders are from, or the colour of their skin,”  remarked Caucasian, male, La Mark Kirk from Bountiful.  “What matters is that they have had a special witness of the risen Lord and if Jesus only appears to Utahns then that says something about the Beehive State.  This must be the place!”