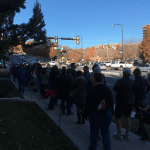 Something feels terribly, horribly broken in the church.

Today my friend Kendall and I took our cameras down to City Creek Park to document the resignation event.   We were there a little early and we set up our equipment in hearing range of a Temple Square heckler. He shot machine gun bursts of vitriol against Mormonism at the first trickle of ‘resignees’ who responded in turn with,

‘You’re preaching to the choir buddy.’

A trickle turned into a stream and then a flood as the press of people waiting in line for their resignation letters to be notarized wound itself onto 2nd Avenue and eventually our heckling friend was drowned out by the buzz of thousands of soon to be former members of the Church of Jesus Christ of Latter-day Saints.

Rainbow flags fluttered against the backdrop of the harsh exterior of the Church Office Building – a symbol of the irreconcilable breach between living by conscience and living by command.

After depositing their letters into a post box on State Street a couple clung to each other and wept as they said their final good byes to childhoods, to the temple, to the church and to the people they loved and had once thought loved them in return.

It wasn’t a crass carnival of mutual outrage. For most it was a relief to make a final but sad departure from a church that has made it clear that it doesn’t want them, or their children , or someone in their family,   or a friend.   Overall it was powerful AND painful and I found myself holding back the tears, or brushing them quickly away as I watched friend, after friend, after friend say goodbye to their religious home.

Something is broken – so terribly, terribly broken and I think its time that we named that brokenness.   Secrets, shadows and pretenses hang like a pall over the church. There are things that must not be said, questioned, doubted, or uttered that are littered amidst the heavy expectation for a lock-step conformity that binds people to words and ideas that sit heavily in their mouths and uncomfortably in their hearts.  We are drowning in the ocean of silence and fear that has us terrified not to name our cultural, theological, procedural,  and organizational problems.

But while I mourn for the loss of my friends from the church today if I pay spiritual attention to what is going on I join with others who feel flickers of hope for what this moment brings us because there is no doubt that the ground is shifting. Something is moving.

My hope is that the will to reclaim the church from its shadows and secrets will be unleashed.   My hope is that we as a community will feel spiritually capacious and capable enough to shift the locus of our attachment from an externally imposed religious system to one that feels authentic and enlarges rather than diminishes our best spiritual capacities – that reflects the best of Mormon thinking rather than its narrowest.

My hope is that We as the church will find the strength, the voice, the power and the fearlessness to claim the church back from the Upper Rooms. That we charge our ecclesiastical leaders with responsibility to work towards a community that spiritually builds rather than spiritually impoverishes us, confuses us, and makes us turn on each other.

But today as I think about my departing friends I would like to farewell you as you go on your way.

The Lord bless you and keep you,

the Lord make his face to shine upon you,

and be gracious to you,

the Lord turn his face toward you,

and give you peace.