What Abandonment Taught Me

Over the past year, I’ve realized that I’m terribly afraid of losing my friends—that I will wake up one day to discover that the people closest to me are no longer so and that they were never really committed to our friendship.

I worry that I may be valuable or useful today, but forgettable tomorrow—that I may at any time be weighed, measured, and found wanting. This fear isn’t rational, and I readily admit that it’s insulting to my friends, but I see no use in denying that it exists.

I know where it comes from. Before I reached my teenage years, my dad effectively abandoned me. After my parents’ divorce, I split time between them, and continued to do so for a couple of years after my mom and stepdad moved from California to Iowa. And then the visits to my dad stopped. I wasn’t sure I wanted to come back to visit him the next summer, and I told him so. He didn’t fight for me. He showed no interest in maintaining any kind of relationship with me. He let me go, and I ceased to be his son. Perhaps I was a disappointment. Anyway, I was disposable.

I never saw him again and spoke with him only a few times over the twenty plus years between our uneventful parting and his death a few years ago. I didn’t attend his funeral. I don’t know if there was one. I was so removed from his world that I learned of his passing a few weeks after it happened. No one in his life ever cared to inform me.

Unintentionally, my dad taught me to expect abandonment. Instead of teaching me to trust and believe in the commitment of others, he taught me to fear that the people I love don’t really love me in return. Ever since, I’ve found it very difficult to get close to people, even though I desire close friends more than almost anything. I’m torn between the impulse to make lifelong friends and the impulse to push everyone away.

It didn’t help that I was that kid other kids didn’t want to befriend because socializing with me lowered their already low social standing. It hasn’t helped that I’ve moved across the country several times as an adult, leaving communities and friends behind. It doesn’t help that I myself am not usually inclined to reach out to people—or that I have at times pushed friends away by things I’ve said or done or written. For me, to lose a friend is to die a little, and in my years I have died more than a little.

A year ago we moved to Portland, Oregon with the intention of making a permanent home here. It was an entirely new place. We knew no one. As winter approached, I became homesick for places that were no longer home. And I grew sick of Facebook, its minimalism and superficiality—and the fact that it had become the standard means of keeping in touch with people and often the only way I felt connected to old friends far away. I felt separated from their lives and put too much stock in their likes.

Perhaps because I desperately desire to put down roots and forge bonds here, my longtime fear has been especially potent. I’ve made friends, close ones, but the fear persists. It speaks, louder and more persistently now than it ever has, telling me I’m not worth anyone’s efforts. And I’m frightened because I sense a coldness in my soul: the capability of doing to others what my father did to me. I’m afraid because in my most despondent moments I believe I really could let my friends and others go and force myself not to care.

And I don’t want to believe that. Ever. 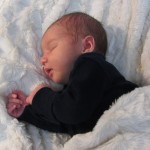 Catholic
What My Newest Newborn Taught Me about the...
Kyle Cupp
TRENDING AT PATHEOS Catholic