Why I Hold on to My Faith, Even Though It Hangs by a Thread 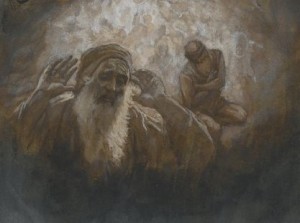 Three words into a hymn or a creed and I’m elsewhere, rudely minding my own business. I confess: I am eternally awful at prayer, habitually inattentive at Mass, and probably hypocritical at worship. I feel I don’t belong, like a guest who lingers defiantly after being politely asked to leave. I figure even an incompetent inquisition would expose me as a fraud.

I listen to descriptions of God from saints and scripture and I think, “My God, what a monster God is,” but then I consider the sorry state of this world and admit that God as a hellish beast makes more sense than God as a loving mother or father.

I can easily imagine a God who creates a system in which few are saved and many are damned, who condemns the wicked, ignorant, and immature with a vengeance. That’s a sensible image of the divine, as these things go. But then I reject the more sensible images because they fit too well with the world. They make too much sense. They are too realistic. Too human.

My heart calls for something more absurd.

I call myself a Christian because Christianity promises the impossible. In the figure of Jesus Christ I find a symbol, a commanding spirit, a Word that speaks–saying “No” to injustice, hate, violence, and death–and “Yes” to life, peace, restoration, and love. I believe this Word of God, not because it makes sense, but because it doesn’t make sense. It isn’t the way of the world. It subverts the world’s logic.

You could say my faith is my refusal to see the world as it is and my willingness to believe that Christ’s absurd, radical, unconditional love speaks the first and last word–a word promising that the impossible will come and commanding us to make it happen.