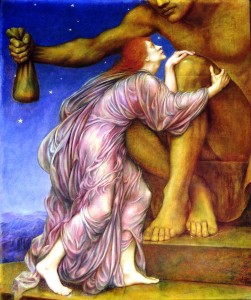 If there was any doubt remaining that Pope Francis is no friend to the capitalist economic order, his address to the World Meeting of the Popular Movements should have obliterated it. “The economy,” he said, “should not be a mechanism for accumulating goods, but rather the proper administration of our common home. This entails a commitment to care for that home and to the fitting distribution of its goods among all.”

This is more than a call for a change of heart, as Bishop-elect Robert Barron and supporters of capitalism have tried to paint the pope’s criticisms. It’s a call for structural change—changes to the basic mechanisms of the dominant economic order.

For the pope, an economy constructed as a mechanism for accumulating goods results in an economy of exclusion and inequality, where money rules, rather than service. You can’t get much more anti-capitalist than that. As its defenders will tell you, capitalism has very effective mechanisms for accumulating goods. That’s the point, the purpose of the system. That’s what it’s designed to do, if for some more than others. Capitalism has been exceptionally successful at making many things and making a few people exceptionally rich.

By design, capitalism has no checks on greed or the idolatry of money. With built-in incentives to produce and acquire goods and to control the means of production, the capitalist system is ordered towards limitless wealth accumulation. The thinking behind the system is that you’re entitled to whatever you can produce or otherwise obtain in the capitalist market. At no point does so much become too much—not for the ethics of capitalism.

The gospels tell a different story, and hence the pope’s concern. Jesus names great wealth as one of the grave dangers to the human soul. Riches make it more difficult to enter the Kingdom of Heaven. Jesus counsels his followers to lend expecting nothing in return—hardly a capitalist disposition!

For Pope Francis, an economy ordered toward the accumulation of wealth is morally disordered, ultimately encouraging the kinds of behaviors that harden hearts and corrupt souls. Call it an occasion of sin. The pursuit of wealth may inspire virtuous behavior, but virtue isn’t the rule. One employer might offer generous benefits like unlimited maternity leave or paid sick time to entice talented workers, but another employer might take advantage of impoverishment to exploit those who in their desperation will accept meager compensation. Not a few corporations do both. There’s no contradiction here; they’re following the logic of capitalism.

Pope Francis wants to change the logic of the economic order by changing its fundamental purpose–away from the accumulation of wealth and towards the proper administration and distribution of goods. This would entail a change to the economy’s basic mechanisms, inputs, and incentives, a change to the controls in force by the economy’s political-legal structure.

More so than even Bernie Sanders, Pope Francis is a radical dreamer.

July 23, 2015
To Love This Poor Perishable World
Next Post