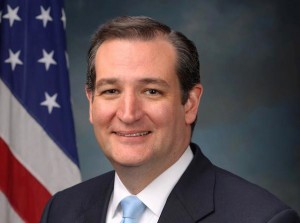 Ted Cruz began his speech at Liberty University talking about “the promise of America.” He told the story of how his father came to the States and found Jesus–and how the “transformative love of Jesus Christ” saved his family and saved him.

With this opening, Cruz got his political campaign up and running on a religious footing. He wants religious voters to join him. “Today, roughly half of born again Christians aren’t voting,” he said. “Imagine instead millions of people of faith all across America coming out to the polls and voting our values.”

If his speech is any indication, the value Cruz prizes above all others is liberty. He asked his Christian audience to imagine him as the president, repealing every word of Obamacare and Common Core, abolishing the IRS, instituting a simple and easy-to-file flat tax, securing the borders, embracing school choice, protecting gun owners, and keeping America free while he keeps the country safe. His other stated objectives include defending the sanctity of life, upholding the sacrament of marriage, and standing unapologetically with the nation of Israel. He wants us to imagine him as the champion of these values as well.

Personally, I prefer it when politicians are open about their religious beliefs and motivations, but let’s be clear that what Cruz is promoting here is not overall a Christian political vision. The nation Cruz wants us to imagine is not a nation informed by the Beatitudes. The least of his brothers and sisters are not much on his political radar. He announced his candidacy with no word to the poor and no word of justice. He serves the “shining city on a hill” and American exceptionalism, reverently calling America “indispensable” and “unique” in the history of the world.

Cruz is a candidate for voters who think themselves indispensable and unique. He’s a candidate for the powerful, for the wealthy, for those who can do as they please. Whatever else that is, it isn’t especially Christian.