Winnie-the-Pooh and the 99 Names of Allah

Patheos Explore the world's faith through different perspectives on religion and spirituality! Patheos has the views of the prevalent religions and spiritualities of the world.
One of my sweetest childhood memories is of my father in his armchair, me in his lap, my two older brothers perched on either arm of the chair. All three of us are listening to him read Winnie-the-Pooh, enchanted because he is barely able to speak from laughter at some Pooh-ism. Passages like this did it for us:

The wind was against them now, and Piglet’s ears streamed behind him like banners as he fought his way along, and it seemed hours before he got them into the shelter of the Hundred Acre Wood and they stood up straight again, to listen, a little nervously, to the roaring of the gale among the tree-tops.

“Supposing a tree fell down, Pooh, when we were underneath it?”

Looking back, I feel that we were enfolded in the arms of ar-Rauf as we listened to our father read these stories. For, of all the 99 Names of Allah, it is ar-Rauf in particular that seems to pervade Winnie-the-Pooh and be embodied perfectly by its eponymous hero. A friend of mine recently translated ar-Rauf as “Honey for the Heart”. I thought this very beautiful, and Pooh’s simple philosophy sprang into my mind:  “…the only reason for being a bee that I know of is making honey…And the only reason for making honey is so I can eat it.”[2]

It can be fruitful for Muslim parents and teachers to explore stories in the context of the 99 Names. By asking what Divine Names might be seen as manifesting in particular characters or events, we can help children see the Divine manifesting in their own lives, and they can begin to build a personal relationship with Allah that is engaged, imaginative and alive.

Ar-Rauf is most commonly translated as “the Clement”. To explain this Name as simply as possible to children, I would offer this:  To be clement means to be kind, warm, and loving. There is great sweetness in this Name. It is a mild light shining into our lives, full of goodness, healing, and forgiveness.

Perhaps I would also want children to see signs of this Name in the world around them, and so I would also offer this:  When people talk about the weather, they sometimes describe it as clement. This means there is gentle sunshine that is warm but not too overpowering. So sunshine is a good sign of the Clement, especially as it can be so healing and fill our lives with sweetness. We might also think of honey. Honey, too, has a golden colour that seems to shine. And it, too, is sweet and very healing, being of great benefit to the body’s immune system. When our bodies are weak and cannot stand much food or strong medication, honey can help bring us back to health. In the same way, ar-Rauf is there for us when we need gentle healing and are feeling very tender.

We might then look at Surah an-Nahl together, which tells us this about bees: There issues from within their bodies a drink of varied hues containing healing for human beings: truly, in this is a sign for those who reflect.[3]

Perhaps after this, children would be in a good position to see how the golden, honey-loving, sweet-natured, serene and unassuming sage of a bear called Pooh was scooped whole from the pot Allah labelled ar-Rauf. Another passage from the book can help to illustrate this:

For a long time they looked at the river beneath them, saying nothing, and the river said nothing too, for it felt very quiet and peaceful on this summer afternoon.

“Of course he is,” said Christopher Robin.

“Of course you are,” said Christopher Robin.[4]

Rumi’s friend and teacher, Shams of Tabriz, is often thought of as quite a formidable character, but see how these words of his evoke the same serene loving kindness:

To the best of your ability, look at your enemy with consideration and love! If you go to someone’s door with caring love, it pleases him or her – even if he or she is an enemy – because when he or she is expecting hostility and harshness from you, but instead sees your love, he or she will be pleased.[5]

It’s almost impossible to imagine Pooh having an enemy, but we can imagine that if he did and turned up at his enemy’s door with a pot of honey – he soon wouldn’t. The Physicians of the Heart (perhaps the most profound and comprehensive contemporary guide to the 99 Names) tells us this type of loving kindness is the hallmark of ar-Rauf:

With ar-Ra’uf, human beings use a calm inner strength to help others when conditions are at their worst, and everyone is panicking. There is a manner of serenity that allows you to overcome hostility, anger, and hate. That calm has a way of going deeply into the essence, and it has a soothing and pacifying effect on others.[6]

In these testing times, when there is so much fear, panic, and mistrust, how desperately we need to teach our children this quality and embody it ourselves.

One way in which Pooh embodies it so well is in the gentle way he guides Piglet, who is often gripped by fear and panic. Sometimes, their friendship can even seem like a student/teacher relationship in the Sufi mode. The Sufi teacher does not attempt to wound or destroy the student’s ego, but rather to bring it into the service of the heart. This may involve soothing and calming the fears which are often at the root of the ego’s pain. As The Physicians of the Heart explain, ar-Rauf is so gently healing it “goes to the place within you where there are sensitive hurts and wounds that you have lived your whole life defending from being touched.”[7]Alhamdulillah, I believe I have experienced something of the healing of ar-Rauf through my teachers.

Winnie-the-Pooh offers us glimpses of many other Names. Piglet’s quiet gratitude at having Pooh and Christopher Robin in his life can help us appreciate ash-Shakur, the Rewarder of Thankfulness. Or we might note that Eeyore is a good witness of al-Mudhill, the Teacher of Humility, but needs Pooh’s help to witness al-Muizz, the Bestower of Honour; or that Tigger’s often misplaced confidence somehow still manages to give us the fragrance of al-Aziz, the Victorious, despite everything.

And when Pooh considers Rabbit’s busy-mindedness, perhaps we can see how our own busy-mindedness veils us from a deeper understanding, from a greater ability to reflect al-Alim, the All-Knowing:

There was a long silence.

“I suppose,” said Pooh, “that that’s why he never understands anything.”[8]

Rumi and Shams would have understood. And they loved a good Pooh song:

Inasmuch as we have staked our all in pure poverty,
we know nothing except singing
these songs of unknowingness.[9]

Daniel Thomas Dyer’s children’s book, The 99 Names of Allah, will be published by Chickpea Press later this year. 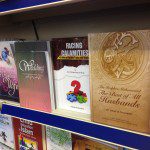 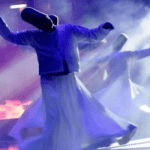 July 17, 2016 The Greater Jihad, the Struggle against the Ego
Recent Comments
0 | Leave a Comment
Browse Our Archives
Related posts from The Living Tradition