Guests of Love: Leonard Cohen and the Sufis (Part 2)

One of the greatest musical performances I have ever witnessed was one wet summer evening in Weybridge in 2009. For two or three hours, a 75 year old Leonard Cohen with his remarkable band kept us so spellbound that the increasingly heavy drizzle felt like life-giving rain. It was as if divine mercy was falling. Leonard has now moved on into the Unseen, but in my nostalgia I wanted to better remember that amazing concert and was looking through a fan forum in the hope of finding some reviews or comments about it. I came across one fan who, the day after the concert, had asked, “Does anyone remember what Leonard’s blessings were?” Leonard would always bless his audience in some humble, beautiful way, and she was compiling a list she was going to call “LC’s Priestly Blessings”. It gives some idea of what this man meant to many of us.

Following my first blog on Leonard Cohen and the Sufis, Arlene very kindly posted a comment directing me to an interview in which Leonard said of Rumi that he “was probably the greatest ascetic religious poet—in the same league as King David”.[i]  Wow – thank you, Arlene.  In the interview, Leonard goes on to make a remarkable connection between his song “The Guests” and the Mevlevi order itself, a connection which would need to be properly investigated before being taken at face value. Regardless, “The Guests” and “The Window” are two songs that Leonard himself said bear the influence of Rumi, and also Attar, another great Sufi poet. Both these songs can be found on 1979’s Recent Songs.

In musical terms, Recent Songs is Cohen’s most exquisite studio album. In a 2001 interview he said it was the album he liked best, explaining, “I’d always wanted to combine those Middle Eastern or Eastern European sounds with the rhythmic possibilities of a jazz or rock ‘n’ roll rhythm section.” Adorned with the aching beauty of Raffi Hakopian’s gypsy violin and John Bilezikjian’s oud, it is a remarkable fusion, even roping in a Mexican Mariachi band along the way.

“The Guests” opens the album and presents us with a vision of God as a welcoming host, generously serving wine to increasingly intoxicated guests. Wine as a metaphor for spiritual ecstasy is common in Sufi poetry, but one of the striking things here is Cohen’s celebration of self-expression and diversity amidst the ecstasy:

And those who dance begin to dance,
those who weep begin,
and “Welcome, welcome!” cries a voice,
“Let all my guests come in.”

All at once the torches flare,
the inner door flies open.
One by one they enter there
in every style of passion.

Perhaps Leonard had come across a similar generosity of spirit in Rumi, for the great poet certainly recognised the beauty and appropriateness of diversity in our forms of worship:

“You,” replied Jesus, “have become mighty heedless of God’s subtle and mysterious grace and loving-kindness to weep so much!”

One of God’s saints, who was present at this exchange, asked God which of the two was of the more exalted station. God answered, “The one who thinks better of Me,” that is, “Within My servant’s conception of me, I am there. Each of My servants has an image or idea of Me. Whatever each of them imagines Me to be, that I am. I am the servant to images within which God lives; I care nothing for any reality where God does not dwell. O My servants, cleanse your thoughts, for they are My dwelling places.

Now make a trial for yourself and see what is more beneficial to you—weeping, laughter, fasting, prayer, or retreat. Choose whichever of these states serves you best and causes you to advance further.”[ii]

The chorus of “The Guests” evokes a sense of mystery and a state in which the urgent yearning of the heart overrides all other priorities:

Rumi, too, suggests we can experience an ecstatic unknowing  in which our fierce rigidity and need for certainty begin to dissolve:

Who could ever describe
the ways of the One who is like no other?
Anything I could say is only an attempt
at what might be needed now.

Sometimes God’s movement appears one way—
and sometimes as its opposite.
The work of real religion is bewilderment;
but not a bewilderment that drives you away
from Him, no, but bewildered like this—
drowned and drunk with the Beloved.[iii]

Perhaps Keats was speaking of the ability to inhabit this heart space when he spoke of “negative capability”. How much brighter our world might be if we relinquished our need to be “right”, and were instead able to fall back into the arms of such a bewilderment.

As for “The Window”, another of Leonard’s most beautiful songs, I hear it as a paean to the human soul  – its sublimity and fragility, its potential for greatness and for ruin. The chorus goes like this:

We might compare this to a quatrain of Rumi’s and sense a tender witnessing of humanity in both poets:

This human face is a shape
tethered in the stall of pain:
part god, part angel, part beast. . .
a secret charm, rarely released.[iv]

Leonard’s song begins by asking this soul, “Why do you stand by the window…?” The window is a recurring theme in the poetry of Rumi, who might have answered Leonard with these lines:

Whatever the soul in man and woman strives to do,
the ear and eye of the soul’s King are at the window.[v]

And come forth from the cloud of unknowing
and kiss the cheek of the moon.
The New Jerusalem glowing,
why tarry all night in the ruin?
And leave no word of discomfort
and leave no observer to mourn.
But climb on your tears and be silent
like a rose on its ladder of thorns.

Then lay your rose on the fire,
the fire give up to the sun.
The sun give over to splendour
in the arms of the high holy one.
For the holy one dreams of a letter,
dreams of a letter’s death.
Oh bless the continuous stutter
of the word being made into flesh.

Passages from Rumi often speak of ladders of spiritual ascent, of roses and thorns, and many more of the symbols Leonard uses above. Any one of those passages might shed light on Leonard’s lyrics. But here is a passage using the symbol of the ladder that appeals to me right now:

Within a human being is such a love, a passion and longing, an itch, a desire, that, even if he were to possess a hundred thousand worlds, he would still not find rest or peace. People try their hand at all sorts of trades and professions – they learn astronomy and medicine, and so forth – but they are not at peace because they haven’t found what they are seeking. The beloved is called dil-ârâm  because the heart finds tranquillity through the beloved, so how can it find tranquillity through anything else? All these pleasures and objects of search are like a ladder. Ladder rungs are not places to stay and abide, but rather are to pass through. The sooner one awakens and becomes aware and watchful, the shorter the road becomes and the less one’s life is wasted on these “ladder rungs.”[vi]

So much beauty. God bless these gentle souls. 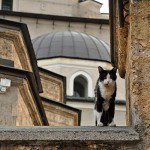 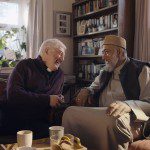 November 27, 2016 Interfaith Friendships – Not Just for Christmas
Recent Comments
0 | Leave a Comment
Browse Our Archives
get the latest from
The Living Tradition
Sign up for our newsletter
POPULAR AT PATHEOS Muslim
1