I finally dealt with what could have easily passed as a birds nest on my head and got my hair cut a couple weeks ago. I can just about tie it back, but spend the first few seconds of wakefulness running my hands around my side of the bed in the dark trying to find my hair-tie. I can no longer tie it into a bun, but it hasn’t deterred Saira from experimenting with different styles.

My Mother has always been a fan of shorter hairstyles but has never thought she could it pull it off. I don’t think she’s ever had her hair done at a salon, except maybe for her own wedding, and even then I’m not too sure. I remember getting ready at a salon for a relatives wedding 10 years ago and my Mother insisted they leave her hair alone, but would they mind touching up her make-up? She has always trimmed her own hair, and before I reached an age when I could walk over to a salon and pay professionals, I would let her loose on mine too, and let her work her magic. I never did have the heart to tell her I hated my new hair, because hair grows back. Besides, it was the 90s and hats were really in.

For as long as I have known my Mother (23 years and counting) she has worn her hair in the exact same style every single day. And not only has she worn the same style, she has worn the same 2 hair clips, in the exact same position on her head. She even sleeps with the hairclips in her hair, only taking them out when brushing her hair in the morning before snapping them back in place a few seconds later. I’m pretty sure she takes them off in the shower though.

Whilst the silver now looks more grey, and the sound it makes when she snaps the slides into place has dulled, it does what it has always done and keeps her hair partitioned and prepped just the way she has always liked it. And like most things my Mother owns, if it’s still functional and doesn’t smell, then she’s not going to let it go. It doesn’t explain why the computer which hasn’t been switched on since 2008 still sits in the study though. I have no idea where she bought the clips, or if they were a gift, but they’ve become such an integral part of both her personality and appearance that I can’t imagine her ever being without them.

As the new kid at Primary school who couldn’t speak English and dressed funny, my Mother experienced some bullying. Kids can be mean. She didn’t know any of the right words, and so she responded one day by cutting off one of the bully’s ponytail. Actions speak louder than words anyway. The bullies left her alone after that, although it didn’t make her any friends either. Even from such a young age she’s been brave, determined, and just a little bit of a badass. And half of my chromosomes belong to her so that makes me part badass, too.

If you have ever watched Gilmore Girls then you will understand when I say my relationship with my Mother is not unlike Lorelai’s relationship with hers. If you’ve never watched Gilmore Girls then ignore the reference because it’s completely lost on you (also, go watch Gilmore Girls). My Mother is a practical person; she thinks with her head and not her heart, lending to a fiercely independent personality and a drive to stop at nothing to find a solution to a problem. She’s strong, passionate and opinionated, and (like all mothers) she will impart unsolicited advice, as is her right. She’s also a scary, small Asian woman, and that’s the kind you don’t want to piss off.

We disagree on almost everything, and although I have never liked it I have come to accept our efforts to emotionally connect with each other will always feel strained and lacking. But the efforts themselves always mean a heck of a lot. Most recently we’ve taken to spending more time together in the kitchen, bonding over dishes I’ve eaten my whole life but am only just starting to learn for myself. However, our personality clash is no different in the kitchen – I like to work methodically, weigh everything, and leave the washing up till last, whereas my Mother works a little haphazardly, throwing in a bit of this and a dash of that, and likes to wash up as she goes along.

As I was planning to share this recipe on the blog, I had to follow her around the kitchen and swipe ingredients to weigh when she wasn’t looking. I drove her mad by “stirring wrong” and “being too scientific” (but Muuuummmm, I’m a scientist!), and she drove me crazy using mother-tongue words I didn’t understand for ingredients she didn’t know the translation for (which I later had to google). I know cooking isn’t as much of a science as baking, but it’s easier to judge “1/2 a teaspoon” than a pinch (or was it a dash? A sprinkle? Smidge? You get it.).

I think the highlight of the afternoon was when I insisted she swap the sole spoon she always uses (almost as old as the hair clips, because still functional and doesn’t smell) for measuring spoons. She cried out that she couldn’t “sense” the weight. We survived and I genuinely cannot wait to do it all over again because my Mother’s an awesome cook and one day I want to be able to feed everyone her food.

It’s delicious all on its own but I wanted to share this with you because it’s also such a great base for tons of other recipes – add it to rice, use it in lasagna (recipe), pies, samosas, curries, chili, pastas, and so much more. It looks complicated with a lot of ingredients, but trust me when I say it really, really isn’t. I wouldn’t recommend you take any shortcuts or omit anything from the recipe because even the smallest pinch of spice makes a huge difference.

My parents don’t hug us (it’s a stereotypical Asian parent thing), but when my Mother hands me a giant bowlful of this stuff and tells me to tuck in, I imagine it’s not far from what it would feel like.

*Note: We made quite a large batch of the recipe to go in different dishes for a party, so unless you really, really like minced lamb or plan to freeze some, I would suggest you halve the recipe. 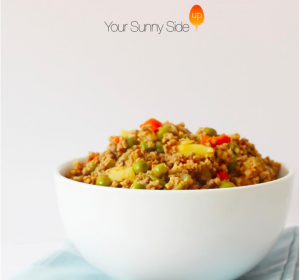 Place minced meat and salt in a pan. Place lid on top and allow to cook on a high heat. Stir after 5-10 minutes, and leave lid covering half the pan. Stir occasionally, until brown (approx. 15 – 20 minutes). Once cooked, place in a colander and set aside.

In a large pan, add 1 tbsp of oil and gently cook the garlic and onion. Add the salt, bay leaf, cinnamon stick, and cardamon pods. Cook until onions have turned soft and brown (approx. 10 minutes).

Add the cooked meat back to the pan, followed by the coriander powder, cumin, turmeric, curry powder and chili powder, and combine everything together. Add the potatoes, carrots, peas, sweetcorn, broad beans, and fresh coriander and mix together.

Add the boiling water and leave the mixture covered on low heat for approx. 10 – 15 minutes. Serve with rice, or use in lasagnas, meat pies, curries, chili, samosas, or pasta.

Adapted from the author’s food blog, Your Sunny Side Up.

Nazia was born, raised, and still resides in London. Her favourite food in the whole wide world is toasted buttered bread, which she sometimes eats at every meal of the day. Her second favourite food is cheese. Besides spending a lot of time in the kitchen, she also really likes reading, writing, taking photographs, quirky socks, Chinese food, stealing rocks from places she visits (it’s not really stealing), wedges (not to be confused with wedgies), mornings, nail polish, washing dishes, pyjama bottoms, the colour yellow, making lists, rainstorms, handwritten letters, coffee, autumn, chewing gum, action movies and comedies, storytelling, and more.

May 22, 2015 Hip-Hop Hijabis: Spitting Rhymes About Being Muslim And Female
Recent Comments
1 Comment | Leave a Comment
"Beautiful"
Sai Who Mothers the Mother?
"Its depressive to see how young ladies are being forced into marriages, as if the ..."
Ruxx Inno Girl Bachelor
"Salaams Zahra, Wow, that piece is so deep and so honest on so many levels. ..."
S. E. Jihad Levine My Iranian Breakup
"This letter was so heart-felt.... I have been in this place for so many countless ..."
Mickie Love Letter to Single Sisters
Browse Our Archives
Related posts from Love, InshAllah