When I was invited to speak at a conference in Iran, I was asked by the organizers to take as much of my digital footprint down as possible. I took down my first LoveinshAllah.com column “My Infidel Husband,” postponed my next two columns, de-activated my website, and even untagged myself in podcast photos of “Good Muslim, Bad Muslim” on Facebook.

Then, two weeks before the conference, the organizers asked me to take down the New York Times article that features my story, “The Birds, the Bees, and My Hole”, from the anthology, Love Inshallah: The Secret Love Lives of American Muslim Women.

I almost wish I had made this ludicrous request to the New York Times. It could have been its own news story: “NY TIMES REMOVES ARTICLE FOR A WHILE BECAUSE COMEDIAN WHO WANTS TO GIVE SPEECH IN IRAN ASKED POLITELY.”

The conference and I broke up.

To be honest, I’m still not entirely clear why, except that my inability to get rid of my Internet identity played a key role. The New York Times article became the tattoo I would never be able to laser away. Also, it became clear that it was not a great idea for me to travel there, as a speaker or private citizen. For every time I heard an “Of course you can go” from Iranian journalists, artists, expats, residents, or government officials, I also heard the opposite from the same.

Political intrigue aside, I usually bomb when I do stand up comedy for my own people. A conference that had to be cautious when it came to controversy had no business inviting me, and I had no business accepting their offer. But, the idea of being an official speaker on Iranian soil, with all my tags – Feminist, Muslim, Iranian-American Comedian – intact, and being accepted…it was a kind of stamp of legitimacy that blinded me to the potential of fiasco.

The first stand up gig I ever got was for the Iranian Student Cultural Organization’s talent show at UC Berkeley. It was an audience of 500 parents and grandparents. The student organizer asked me to take all my dad stories and put them together for a 15-minute routine. My performance was a hit. Everyone was laughing, including my father, who was laughing and crying. Parents approached me afterward telling me how much they saw themselves in my father’s stories.

I started to get requests to perform at Persian benefits, conferences and alumni events. Sometimes, I’d perform at weddings and dinner parties, called mehmoonies. It was exciting at first, but after a few shows, I ran out of material. What started out feeling like creative parameters became suffocating restrictions. Every gig had the same requirements: “No jokes about politics or religion. Don’t talk about boyfriends or girlfriends. Oh, and can you perform some new material?”

“No,” I wanted to scream, “I’m 22-years-old. My well of uncontroversial childhood memories has run dry.”

As a young woman I had plenty of funny stories about my relationship with my father. I wanted to talk about how he was afraid that I was gay because I never revealed an interest in boys or dating. I wanted to tell jokes about how dad’s initial homophobia seemed to disappear when I introduced him to my whitey-white, atheist, infidel boyfriend and he asked if maybe I was confused and that a nice Muslim woman might be a better fit for me. I wanted to tell stories about the pro-revolution Farsi school I attended as a kid and how all its textbooks left me thinking Khomeni was a sweet old, misunderstood Santa Claus.

When I tried to tell these stories at Persian shows they were met with discomfort. Audience members who found them funny stifled their laughter and looked down at their feet. I needed the open mic circuit to find my uncensored voice. But even as I became a stronger comic, I felt pressure by Iranians and non-Iranians to be the token entertainer to educate the masses while celebrating my heritage.

“Sorry,” I’d say, “You and I have the same American education. So neither of us knows anything about any of that.” Then, we’d both return to our seats to listen to the next comic on stage joke about his tiny balls and big dick.

In the Persian communities I grew up in, I was taught to correct people when they called me Middle Eastern and tell them I was Persian and that Persians are European. So, I grew up thinking that I was white – but just really bad at it. Like some of my Persian audiences, my parents hated political conversations; as Iranians, they’d had their fill. When I was asked questions after shows, I was as ill equipped to answer them as I was when conflicts over my identity arose in high school. One of the reasons I connected with my white American husband was because he also felt like an outsider in his own community.

The invitation to speak in Iran felt like a once in a lifetime opportunity to merge my many worlds: as a Middle Eastern person of color, Muslim, feminist Iranian women, and as a member of the diaspora who could finally find a sense of belonging amongst family that I hadn’t seen in 20 years. I was incredibly naïve. The more I prepared for the conference, the more I discovered how very American I am. Feminism in Iran came with a very different context and messaging. The word “infidel” to my Iranian relatives was not a light and jovial jab at my atheist husband, but a dangerous slur.

Until then, I’d prided myself on a typical American education that left me naïve and unaware of foreign policy debates. I didn’t stay up to date on current events, because the demand for every Muslim/Middle Easterner to be PhD ready for watercooler discourse is absurd. I found value in approaching accusations made against Muslims with dumbfounded surprise and cluelessness.

I know that there are many Middle Eastern/Muslim Americans who also have no idea what’s going on most of the time. I don’t know what’s happening in the Middle East or why (though HBO’s “The Wire” recommends that I always “follow the money” when solving a case). I wanted to speak to the experience of Muslims and people of color like me who experience racism and aren’t equipped with anything but common sense to point to it and say, “Hey, this is absurd – and here’s why it’s funny.”

All of which was fun and games out here in the San Francisco Bay Area, where everyone wants to advertise the ways that they are unique and different. Journeying abroad with this same wide-eyed and optimistic identity felt irresponsible.

I canceled my trip. It was devastating. But it’s ripple effect was even more heartbreaking. My parents were on the phone ceaselessly, explaining to relatives why we couldn’t come, telling my twenty aunts and uncles and hundreds of cousins why they wouldn’t be meeting my new husband, why the time they’d taken off work to spend with us was unnecessary, why they could pack away the extra futons they’d set aside for us, why they’d have to cancel the boisterous mehmoonies they’d planned, why it was unnecessary to rent the bus to go site-seeing up North, or to caravan it to another relative’s house to cities I’d never seen, heard of, or wondered about until this moment.

We couldn’t change our plane tickets to Dubai without a monstrous cancellation fee. So, we decided to make the most out of the unexpected three-week family vacation. We took a cruise around the Adriatic Sea, saw Italy, Greece and Croatia, and stopped in Dubai for five days to meet my grandma and aunt. They were the only ones who were able to get visas in time to meet us there.

In Dubai, my infidel husband and I were in for a whole different adventure. More on that in next month’s column.

Zahra Noorbakhsh is a Feminist Muslim comedian and writer. The New Yorker Magazine dubbed her one woman show “All Atheists Are Muslim” a highlight of the Int’l New York City Fringe Theater Festival, the largest multi-arts festival in North America. Her most recent one woman show “Hijab and Hammerpants” is playing in theaters around the Bay Area. Zahra is also one half of the podcast “Good Muslim, Bad Muslim” featured on PRI’s Global Nation. To keep up with Zahra, visitZahraComedy.com and join her newsletter. 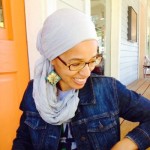 May 28, 2015
Recent Comments
1 Comment | Leave a Comment
"Beautiful"
Sai Who Mothers the Mother?
"Its depressive to see how young ladies are being forced into marriages, as if the ..."
Ruxx Inno Girl Bachelor
"Salaams Zahra, Wow, that piece is so deep and so honest on so many levels. ..."
S. E. Jihad Levine My Iranian Breakup
"This letter was so heart-felt.... I have been in this place for so many countless ..."
Mickie Love Letter to Single Sisters
Browse Our Archives
get the latest updates from
Love, InshAllah
and the Patheos
Muslim
Channel
POPULAR AT PATHEOS Muslim
1