So says Dr. Michael Farris, the college’s founder and chancellor.

“[Homosexuals] could not sign our honor code,” Farris said, adding that he considers the actions of gay men and women “sinful.”

“Part of the honor code is to be sexually pure,” he added.

“We don’t think that there are any such students,” Farris said of gays and lesbians at his college.

The Queer PHC blog probably had the best response to that:

Quick! Clap if you believe in fairies!

But let’s stop and consider, though, because Farris’s response is extremely important. I’ll start by quoting once again from Queer PHC:

There’s a stark difference in the definition of our terms. In the eyes of those like Farris, homosexuality is just a sexual action or sexual lifestyle. For us, it’s an orientation, a marker of personal identity. Is it possible that there are no students having gay sex while enrolled at PHC? Entirely possible. But that doesn’t erase the existence of LGBTQ students at the school.

In a student body where there are so many virgins, why is it difficult to believe in the existence of a gay virgin?

It’s difficult if you believe homosexuality is completely synonymous with having gay sex.

That, right there, is critical.

Michael Farris believes that it is living a “gay lifestyle” that makes someone gay. And as Farris points out, the honor code students sign when they attend PHC includes a pledge of sexual purity – meaning, of course, abstinence until marriage. In other words, every student attending PHC pledges to remain a virgin. Farris, therefore, argues that because no one at PHC is having sex (or at least, they’ve promised not to), then it’s literally impossible for anyone there to be gay, because he sees homosexuality as synonymous with gay sex. Perhaps this helps explain his fondness for the Supreme Court’s 1986 decision upholding states’ ability to ban sodomy in Bowers v. Hardwick. If you ban sodomy, Farris believes, you eliminate homosexuality.

I am reminded of an image I saw recently:

[Text: We believe that those involved in homosexuality are created in the image of God and, because of that, deserve respect. However, their actions are damaging both to themselves and to society as a whole. Just like smoking or drug addiction, this behavior should not be encouraged or promoted by our government. We believe that those involved in homosexuality are complete personalities who should not be confined to a label because of a sexual act. To do so is as superficial as labeling an adulteress wife or husband for life because of a sexual act. These actions are seeking the same love, validation, and acceptance that all of us seek, yet an answer will not be found in repeated unhealthy interactions or societal or government approval of these actions. We believe this deep hunger can and will only be satisfied in a personal relationship with Jesus.]

Like Farris, the Liberty Council, the author of this statement, views homosexuality as an “action,” something someone becomes “involved in.” And like Farris, they compare homosexuality to things like drug addiction and adultery. They see homosexuality as an action, a lifestyle, not an orientation, or a characteristic like sex or race. And because the honor code means pledging to be sexually pure, and therefore necessarily requires a person to not be living a “homosexual lifestyle,” Farris can assert that there are no gay people at Patrick Henry College.

There was a time when Farris’s view was the dominant one. There was a time when homosexual contact was seen in very much the same light as visiting prostitutes, or having an affair. It was a sexual indiscretion, and a scandalous one at that, but not an orientation. (For a look at the history of homosexuality in the United States, and especially issues of indiscretion and orientation, read Chauncey’s Gay New York and Canaday’s Straight State.) But Farris’s view is dominant no longer, and his side is fast losing its grip on the narrative.

I would finish by asking a question. If Farris is so sure that gay students don’t exist at PHC, why is he so scared of Queer PHC?

A source close to the college, who spoke on the condition of anonymity, told the Times-Mirror the blog was “all anyone [was] talking about” on campus.

The source reported that Queer at Patrick Henry College had been blocked on the school’s WiFi for several days.

“They’ve never blocked anything the way they’ve blocked this,” the source said.

You’d think that if there aren’t any gay people at PHC, and if the honor code makes it so gay students can’t exist at PHC, Farris wouldn’t have to worry about Queer PHC being all that subversive or appealing to the student body. So why block it?

December 15, 2012
The Newton Shooting and the Roman Empire
Next Post 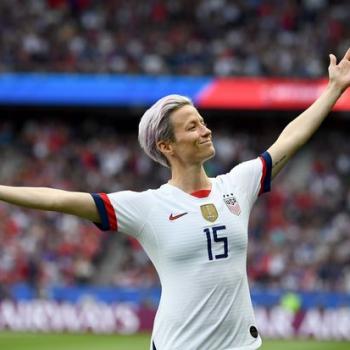 Nonreligious
Why I Desperately Want the U.S. to Win...
Love, Joy, Feminism
TRENDING AT PATHEOS Nonreligious