One way to dull your children’s sensitivity to God is to make them religious showoffs. Parents who value the outward displays of devotion often fall into the Pharisee syndrome. Don’t train them in the skills of pretense. Don’t train them to be “as the hypocrites are: for they love to pray standing in the synagogues and in the comers of the streets, that they may be seen of men. Verily I say unto you, they have their reward (Matt. 6:5).”

Passages like these tortured me as a child, because I enjoyed the praise I received from adults but was terrified that this meant I wasn’t a good enough Christian, my personal relationship with Jesus and healthy prayer life aside. But that’s a subject for another post. I loved showing off how much I knew when my parents asked me to do so—and the praise that came with it—but I had siblings who very much didn’t. Instead, it made them miserable. Kids aren’t mere extensions of their parents. So here, I find myself agreeing with Michael. It’s a weird feeling.

But let’s return to Michael, because things are about to get a whole lot more strange:

The other day, I invited my family out to see our dog do a new trick. I gave the command, but he was too distracted by them to regard me. I had interrupted their schedule on promise of a trick, and he acted as if he had never seen me before, much less knew what I was saying. I became anxious and started pushing him to perform. He was making me look silly. “What right does he have to do this to me? Me, of all people. My family would have thought I was so smart, and now I look dumb. Stupid dog. Must be inbred.” Sensing my disapproval, he started to shy away from me. To get my approval, he must make me look good in public. After all, what is a dog good for, but to elevate his master?

I am so confused right now. So confused.

Throughout his book Michael advises parents to train their children like dogs (his comparison, not mine). He also warns parents that if they let their children be obedient even once, that one instance of inconsistency will undo all of the work they’ve done. And yet, here Michael blames himself when he tries to get his dog to show off a trick and his dog refuses? If it were a child refusing to obey, would that child get off so easily?

Here is how Michael advises responding to a child who disobeys a parent’s command, in a passage earlier in the book:

When the time comes to apply the rod, take a deep breath, relax, and pray, “Lord, make this a valuable learning session. Cleanse my child of ill-temper and rebellion. May I properly represent your cause in this matter.” No jerking around. No raised voice. The child should be able to anticipate the coming rod by your utterly calm and controlled spirit.

At this point, in utter panic, he will rush to demonstrate obedience. Never reward delayed obedience by reversing the sentence. And, unless all else fails, don’t drag him to the place of cleansing. Part of his training is to come submissively. However, if you are just beginning to institute training on an already rebellious child, who runs from discipline and is too incoherent to listen, then use whatever force is necessary to bring him to bay. If you have to sit on him to spank him then do not hesitate. And hold him there until he is surrendered. Prove that you are bigger, tougher, more patiently enduring and are unmoved by his wailing. Defeat him totally. Accept no conditions for surrender. No compromise. You are to rule over him as a benevolent sovereign. Your word is final.

Otherwise, tell him to bend over on the bed or couch; and while he is in this position give some choice admonition. You have his undivided attention. Slowly begin to spank. If you go too fast, you may not allow time enough for the inner transformation to occur.

Use your own judgment as to what is effective. I found five to ten licks usually sufficient. Sometimes, with older children, usually when the licks are not forceful enough, the child may still be rebellious. If this occurs, take time to instruct and then continue the spanking. A general rule is to continue the disciplinary action until the child is surrendered. A spanking is made effective, not by its severity, but by its certainty. Spankings don’t have to be as hard where they are consistently applied. Your calm dignity will set the stage to make it more effective.

Why does Michael show more understanding of his dog’s disobedience than he does of children’s disobedience? Michael understood that his dog was distracted. What about times when a child might be distracted? Would the child get the same hearing? To answer this question, let’s look at another passage from earlier in the book:

One father tells of his training sessions with each new toddler. He sets aside an evening for “booty” camp, which is a boot camp for toddlers. The child of ten to twelve months is left alone to become deeply interested in a toy or some delightful object. From across the room or just inside the other room, the father calls the child. If he ignores the call, the father goes to him and explains the necessity of immediately coming when called, and then leads him to the father’s chair. The child thus led through these paces is being programmed.

He is returned to the toy and left alone long enough to again become engrossed. Another call, and, if no response, the father gives a patient explanation and demonstration of the desired response. The parent, having assured himself of the child’s understanding, once again sets up the situation and calls the child. This time, if there is not an immediate response the child is lightly spanked and lectured. The father continues this throughout the evening until the child readily and immediately responds to a summons. Thereafter, until the child leaves home, he is expected to drop everything and come upon the first call. As long as the parents remain consistent, the child will consistently obey. This “obedience training” is carried out in the utmost patience and concentration. The spanking should not be viewed as punishment, but as reinforcement to commands.

Notice that there is no understanding that a child could fail to come when called because that child is distracted. In fact, the father intentionally gives the child a distraction. As a parent, I have long learned that I can’t just call my children and expect them to come, because there’s a very good chance that even if they’re within distance to “hear” me they’ll be distracted by some toy or activity and won’t actually hear me. Instead, I make sure to get their attention. And I listen to them, too—sometimes they’re in the middle of something, and what I need isn’t urgent, so I tell them they can finish. And even then they sometimes forget that I need them when they finish what they’re doing, and I have to go remind them, because they’re kids and kids are human and this is a thing that happens.

Michael’s response to a child’s disobedience would likely depend on the child’s age. An older child would get a whipping, as described in the first passage above; a smaller child might get another training session, as described in the second passage. It’s Michael’s shoulder shrug and his conclusion that he was wrong to ask his dog to demonstrate his new trick to begin with that I don’t understand. 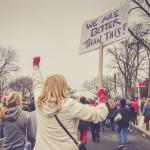 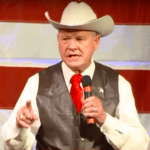 November 9, 2017 Woman Accuses Alabama Judge Roy Moore of Sexually Molesting Her When She Was 14
Recent Comments
0 | Leave a Comment
Browse Our Archives
get the latest from
Love, Joy, Feminism
Sign up for our newsletter
POPULAR AT PATHEOS Nonreligious
1

7-Year-Old Dies From COVID-19 After Attending Church With...
Suffer The Children: A 7-year-old Georgia boy with no underlying conditions is...
view all Nonreligious blogs
What Are Your Thoughts?leave a comment
Copyright 2008-2020, Patheos. All rights reserved.