That Time Jesus Was at the Well with Steve Bannon 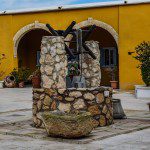 I grew up in an evangelical home; while I’m no longer religious, I’ve become somewhat familiar with liberation theology, and with progressive Christianity more generally. Given this familiarity, I was seriously troubled by a recent tweet by Nadia Bolz-Weber, progressive Christian pastor and author: 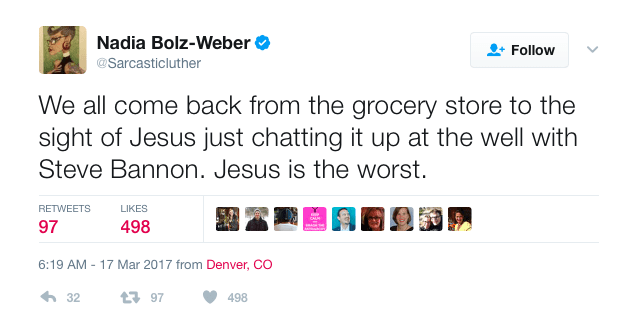 Text: We all come back from the grocery store to the sight of Jesus chatting it up at the well with Steve Bannon. Jesus is the worst.

The story about the woman at the well, of course, goes like this:

He left Judea and went away again into Galilee. And He had to pass through Samaria. So He came to a city of Samaria called Sychar, near the parcel of ground that Jacob gave to his son Joseph; and Jacob’s well was there. So Jesus, being wearied from His journey, was sitting thus by the well. It was about the sixth hour.

There came a woman of Samaria to draw water. Jesus said to her, “Give Me a drink.” For His disciples had gone away into the city to buy food. Therefore the Samaritan woman said to Him, “How is it that You, being a Jew, ask me for a drink since I am a Samaritan woman?” (For Jews have no dealings with Samaritans.)

With this introduction, Jesus and the woman have a conversation about “living water” and the woman is thoroughly impressed with Jesus and decides he must be a prophet; Jesus’ disciples come back with food and are shocked to find him speaking with a Samaritan woman. It was not proper!

Various individuals responded to Bolz-Weber pointing out the problems with making a comparison between the woman at the well and Steve Bannon. 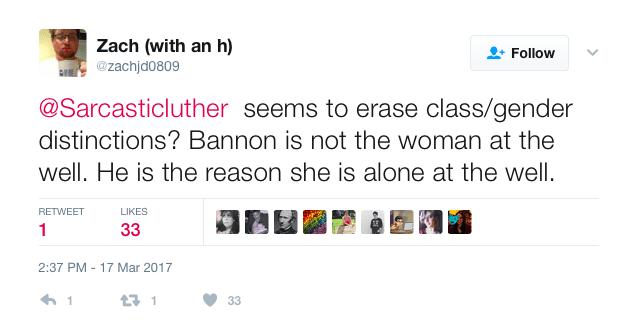 Text: @Sarcasticluther seems to erase class/gender distinctions? Gannon is not the woman at the well. He is the reason she is alone at the well.

Bolz-Weber responded to this criticism as follows: 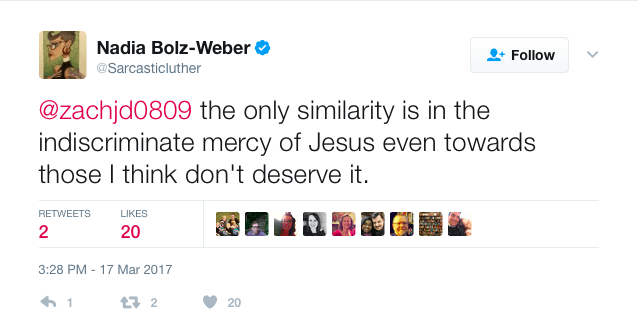 @zachjd0809 the only similarity is in the indiscriminate mercy of Jesus even towards those I think don’t deserve it.

For the Steve Bannons of his time, Jesus had an entirely different response:

“Woe to you, teachers of the law and Pharisees, you hypocrites! You are like whitewashed tombs, which look beautiful on the outside but on the inside are full of the bones of the dead and everything unclean.”

There are reasons to question the New Testament’s profoundly negative presentation of the Pharisees and others described. Still, if you’re going to look for a Steve Bannon counterpart in the New Testament as written, the obvious candidates are the teachers of the law and the Pharisees. After all, these individuals are portrayed as lacking in compassion, having some form of political power, and promoting prejudice against the poor and against those treated as foreigners (such as the Samaritans).

According to Bolz-Weber, however, her point was that Jesus is at the well with whoever we think does not deserve it. 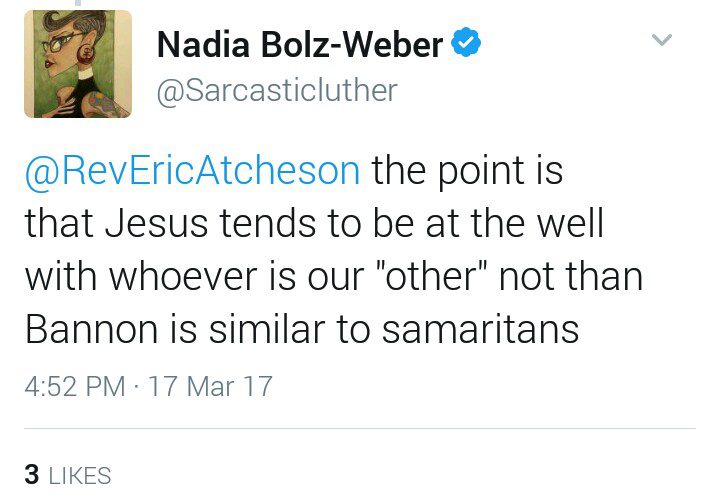 Text: @RevEricAtcheson the point is that Jesus tends to be at the well with whoever is our “other” not than (sic) Bannon is similar to samaritans

And, given Jesus’ words to the Pharisees, he clearly didn’t not judge.

Bolz-Weber is hip and cool and tattooed and tries to bring Christianity to Millennials like me, interested in social justice and disillusioned by evangelicals’ focus on ending gay marriage or banning abortion. But if her tweets are a fair sample, she’s not actually doing liberation theology.

I like the idea of a Christianity that is about freeing those who are marginalized and ending oppression—this is what liberation theology attempts. This is not what Bolz-Weber is engaging in with her tweets. Instead, she’s taken a passage about Jesus spending time with a member of a marginalized social group and made it into something that applies to anyone we don’t personally like, even if the reason we don’t like them is that they are oppressing marginalized social groups. That’s about as far from liberation theology as you can get.

I have to ask—was Jesus also at the well with Hitler? Pol Pot? Mao? Stalin?

How Hell Developed in Early Christian...
Roll to Disbelieve
Browse Our Archives
TRENDING AT PATHEOS Nonreligious

Sports, hospitals, movies and music
We at the Freedom From Religion Foundation were batting for the Constitution...
view all Nonreligious blogs
Copyright 2008-2021, Patheos. All rights reserved.