Celebrating the New Year: Why it’s more important to look back than ahead 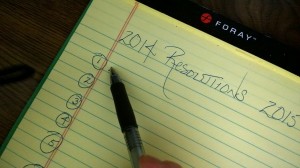 This New Year’s Eve, folks will be talking about making New Year resolutions, like  losing weight, reinvigorating friendships, exercising more, quitting a bad habit, or making more time for leisure. Those are all good things (even though our efforts tend to wane after the first couple weeks), but how many of us will look back on 2014 and make resolutions based on the positive things we did rather than the negative things? Not many, I’d venture to guess.

Often, we review the year past with a focus on all the things we didn’t succeed in doing, or the things we did do that make us regretful. But, we weren’t all that bad last year, were we? In fact, if we think about it, there probably were some really great things that we did, qualities we developed, or virtues we fostered. Perhaps we discovered a strength we didn’t know we had, or found a new talent (or a new way to use and old one). Do we really want to scrap all that and start again?

I’ve found that I usually fail at the resolutions that are beyond my reach. I bite off more than I can chew because the turning of the calendar makes me feel renewed and ready to face challenge (yea, sometimes that’s just the champagne talking). I see family and friends do this also. We become overly ambitious and set goals for ourselves based on hopes and dreams rather than on who we are and what are already have to offer.

Building on what’s good, as opposed to beating ourselves up over what’s bad, will make us feel better about ourselves, more capable and lovable, so we can behave more like the Child of God that we are rather than the super-human person we wish we could be. God loves us just as we are, faults and all. Why not use what he loves about us as impetus to become more of the person he meant us to be from all Eternity?

When we focus on growing spiritually, we deepen our faith. Our deepened faith – and the trust in God that will stem from it – will help us to overcome our bad habits and undesirable traits with greater ease than if we grit our teeth and try to power our way through it.

Before we say goodbye to 2014, let’s reflect and pull from it all the positives that we want to bring with us into 2015. When we think about it, we’ll have plenty for which to give thanks to God and much reason to pledge to use it more fully in the future.

Celebrating the New Year begins with first looking back and celebrating the Old Year. Examing who we were in 2014 will lead us to be who we’re meant to be in 2015.

December 23, 2014
Christmas in the Cave of the Shepherds
Next Post