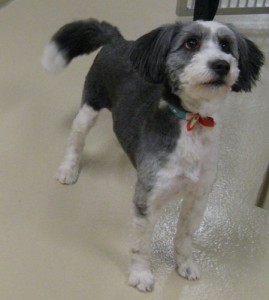 When virtual pets first came on the market in the mid-1990s, I pretty much ignored them, convinced they were a fad what wouldn’t last.

Much to my amazement, they did last.

In fact, they not only lasted, but they morphed into a vast array of both digital and online pets, with the fad spreading from Japan, their country of origin, to the rest of the world. Most famous is the Tamagotchi line of digital critters.

Having had a real, living dog for most of my life, I found it odd that anyone would want to carry around and spend time nurturing something that wasn’t truly alive. I could see doing that as part of a game, perhaps, but not long-term and certainly not with any degree of affection or sincerity.

Now I see that the fad has morphed into a new critter: robotic pets.

As news item on today’s online edition of the Business Standard caught my eye. The headline read:

‘Robotic pets may replace real ones in a decade’

According to University of Melbourne animal welfare researcher, Dr. Jean-Loup Rault, robotic pets could replace living ones by 2025. Two of the reasons Dr. Rault cited were overpopulation (of people), infatuation with technology, and migration to high-density city living. He noted that robotic pets could benefit people who are allergic to pets, short on space, in hospital, or scared of real animals.

What’s more, Dr. Rault said, is that with artificial intelligence pets could learn to think and respond on their own.

“When engineers work on robotic dogs, they work on social intelligence, they address what people need from their dogs: companionship, love, obedience, dependence,” he said.

Robotic dogs can LOVE like real ones? Not a chance.

I can see how they could mimic affection, dependence, and obedience. I even can see that there’d be a way for them to fake eating and drinking – maybe even pooing, but I don’t know why anyone would want to go that far. But, the love and companionship offered by a living pet simply cannot be replicated by a machine. To greater or lesser degrees, depending on the individual dog, dogs have an intuitive sense for the needs, emotions, and behavior of human beings.

I know this from Ms. Daisy, our 7-year-old lhasa apso-poodle mix.

My Facebook and Twitter followers already know about Ms. Daisy – my Ms. Daisy posts are some of my most popular. Why? Because she’s one of the most perceptive and responsive dogs I have ever met, and people pick up on that through my posts. And, of course, she’s adorable.

Let me just give you a few examples.

Some years back, I had a serious health condition that Ms. Daisy spotted long 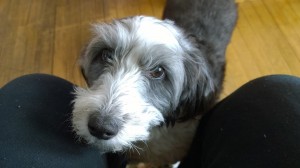 before any of the rest of us did, including me. For months before my diagnosis, she stuck to me like glue, having to have some kind of physical contact with me at all times. Whenever I’d sit down, she’d jump on my lap and lay her head to my chest as if she was listening to my heartbeat. That behavior ebbed when the health condition was resolved. 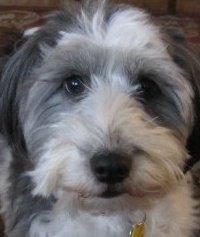 Ms. Daisy is like the Stress Police. She absolutely knows when I’m upset – even from the other room – and rushes over to soothe my nerves. She will climb my lap, the chair, even the dining room table, whatever it takes to position herself in front of me. Then she’ll stare me down, so to speak, until I get her message and calm down. Then she goes back to whatever she was doing before I got testy.

I don’t have to tell her who she can make friends with and who she should leave alone. She knows this intuitively. Friendly folks get wiggles and licks. Leave-alone people get tail wags.

Ms. Daisy has personality. She has style. She has cool enough to be a beach diva. 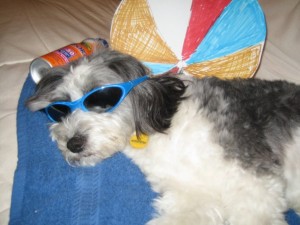 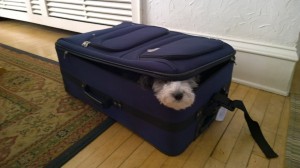 Ms. Daisy’s best talent is showing off her adorable-ness. I will (proudly) admit that she’s the queen of manipulation and has an affinity for the camera lens. She really, truly has “facial expressions” that change depending on what it is she’s trying to communicate (or get out of you). She also has an uncanny sense for how much she can finagle and from who.

I would put Ms. Daisy up against RoboDog any day, and I guarantee she’d win. I can see that there are some things about robotic dogs that would make them an interesting novelty. I even can imagine they might be developed far enough to be helpers to people with disabilities.

But never, ever, will you convince me that they can be an authentic replacement for a real, living dog. 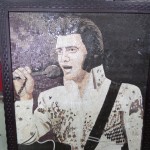 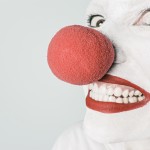 May 13, 2015 No, you are NOT entitled to be happy!
Recent Comments
0 | Leave a Comment
Browse Our Archives
get the latest from
Catholic
Sign up for our newsletter
POPULAR AT PATHEOS Catholic
1

Whose June Is It?
Mudblood Catholic
Related posts from Catholic to the Core 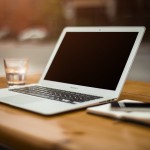 Catholic
WiFi could make you sick - what one...
Catholic to the Core

Catholic
WiFi could make you sick - what one...
Catholic to the Core

Catholic
Why Venerate Mary's Name?
Catholic to the Core
TRENDING AT PATHEOS Catholic