People who say, “Sodom and Gomorrah were condemned, not for homosexual acts, but for lack of hospitality” really need to retire that ridiculous meme. The biblical text is pretty obvious. When the angels come to visit Lot in Sodom, he takes them in. “But before they lay down, the men of the city, the men of Sodom, both young and old, all the people to the last man, surrounded the house; and they called to Lot, “Where are the men who came to you tonight? Bring them out to us, that we may know them.”

“Know” is the Hebraism for sexual intercourse. The story crackles with the menace of gay rape. The mob (whom the writer repeatedly emphasizes were men) “pressed hard against *the man* Lot”.

As Scott Hahn points out, the threat of homosexual rape is a particularly acute form of “inhospitality”.

So don’t kid yourself. Homosexual intercourse was regarded as gravely sinful in the Old Testament and Christianity receives that from the Jewish tradition. Few things are more tortured than the attempt to make the Bible a document in support of gay sex. It just ain’t. Tertullian, who had his own issues, was at least perceptive on this score when he said “What has Athens to do with Jerusalem?” Like it or not, the Christian tradition teaches that homosex is a grave sin.

May 2, 2012 Prayer Request
Recent Comments
78 Comments | Leave a Comment
Browse Our Archives
Related posts from Catholic and Enjoying It! 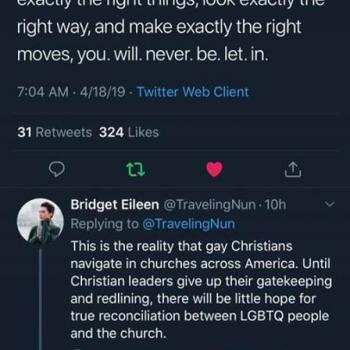