So last week, I chronicled a bit of Austin Ruse’s anti-semitic, idiotic, and false attack on Jenn Morson, Simcha Fisher, and Rebecca Bratten Weiss and the lie that there was some “coordinated attack” happening against Catholic institutions of higher learning–all funded by the sinister ArchJew George Soros.

Soros has become the bogeyman of the Right Wing Lie Machine. Mention his name and you are guaranteed a Panic of the Stupids who will take that mere mention as a proof of guilt for something. If you challenge the Stupids on just what it is he (and anybody associated with his name) is supposed to be guilty of, they wave their hands vaguely, blather something, and then explain “Shut up, you stupid liberal!” and exit stage hard right.

Still and all, facts are stubborn things and, when it comes to Soros, the Evil Genius Mastermind Nazi Communist Jew, there’s not a lot of There there fact-wise. Turn out he’s a rich liberal capitalist who spends his money on things that are, you know, fairly typical for liberals to spend money on–and often loses anyway. He is not the World-Controlling Jew Octopus that so occupies the imagination of the Party of Trump and Nazi sympathizers (but I repeat myself): 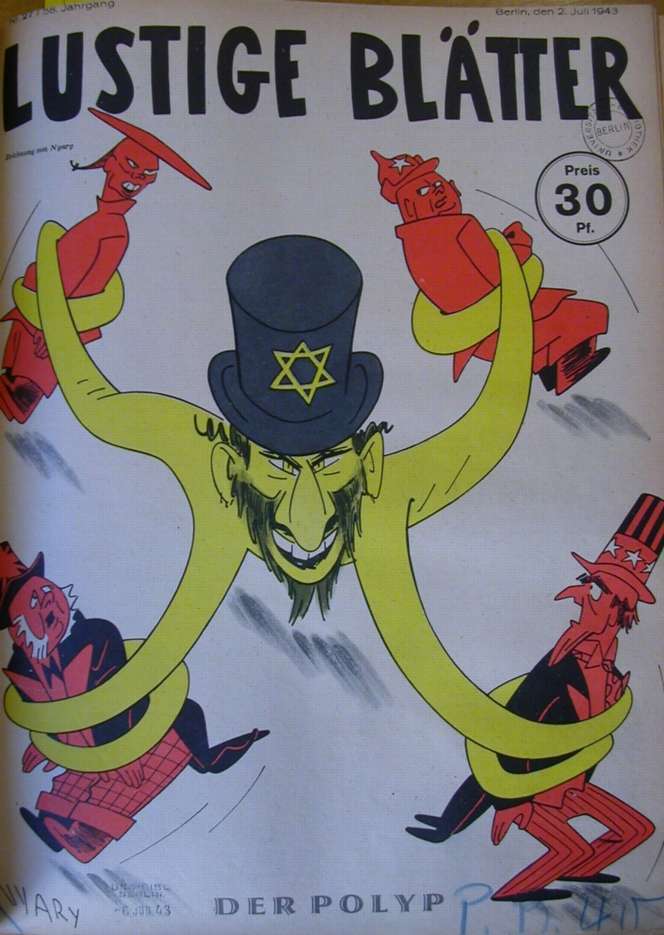 If you want some facts about Soros instead of the Panics du Jour in which the likes of Austin Ruse trade, try this:

Then reflect on the fact that the “coordinated attack” supposedly funded by Soros did not involve Weiss in any way, did not involve Fisher (not “Fischer”) in any way and was basically a piece on sexual assault of women at Franciscan University, written by Morson, which was accurate–and that is the only thing that matters. Indeed, even Morson was not part of a “coordinated attack” since she did not coordinate anything. There was, despite the lies of Church Militant, no coordination with Weiss. There was no coordination with Fisher. There was not even any coordination with Soros, whose money she did not know she was being paid when she wrote the piece.

In short,, all Ruse’s Jewish Conspiracy BS was just there in order to deflect from the reality that sexual assault has happened at Franciscan and has not been dealt with justly.

That’s what the Commonweal piece points out:

Meanwhile, at Crisis, Austin Ruse dismisses the idea that the assaults matter out of hand: “the issue is never the issue.” For him, the real issue is punishing “orthodox” institutions; the women are a distraction. The Steubenville student is a child and can be forgiven his naiveté; the evidence suggests Austin Ruse is fully grown, though perhaps charity demands I believe otherwise. In any case, this line of argument is also a popular one. In his obituary for the late Cardinal Bernard Law, for instance, Philip Lawler wanted to stress that Law was “not unique” in his handling of the sexual abuse of minors. (Everybody covers up child abuse; why do you care so much this time?)

Ruse writes in defense, in part, of Stephen Krason, a professor at Steubenville who has been singled out for criticism by alumni for his writings on sexual harassment. Of women who are harassed or raped and keep silent out of fear of career retaliation, Krason asks, “Were their careers more important to them than sexual virtue? Can’t they truly be viewed, at least to some degree, as cooperators with wrongdoing?” It’s difficult to imagine this question being asked of other kinds of violence—whether or not, for example, an employee who takes a punch to the face cooperates in it.

Do women matter? The answer, at least in these responses, seems to be no. They can be part of a functioning sexual system (by facilitating marriage), occasions of sin (by tempting men to rape them), or an opportunity for men to prove their virtue (by not raping them); they can also be collateral damage in upholding the name of a distinguished institution (or weapons wielded against the same). But that women actually matter for their own sake doesn’t seem to be on the table. Certainly they do not matter as much as a university, or matter enough to be treated as more than fodder in culture-war debates.

If this pattern of response to abuse sounds familiar, that’s because it was exactly the same pattern by which “Defend the Institution from the Victims!” ecclesiats so successfully wrecked the response of the Church to the massive sex abuse scandal of 2002 and following.  Instead of addressing straightforwardly the fact that people were being raped, “defenders of the faith” repeatedly attacked the victims as troublemakers.

That is exactly what Ruse is doing, yet again.  The question of rape don’t enter into it for him and the creatures in the CRISIS!!!!!!!! comboxes.  This is about a “coordinated attack” on Fr. Maciel Franciscan University. The rape and sexual assault victims are only complaining and Morson is only reporting because, for some inexplicable reason, sexual assault victims have some strange vendetta against Franciscan and the Church.

And, not surprisingly, Austin Ruse is the author of an infamous defense of the monster Maciel.

Ruse is a man who knows how to please those who butter his bread to the tune of nearly $200K a year. He accuses people of attacking the Church for the sake of filthy Soros Jew gelt while turning a blind eye to sexual assault because, like the rest of the Party of Trump, accusation is always a form of confession for that crowd.

Relatedly, Deacon Steven Greydanus writes about our need to finally wake up and talk sanely about sexual assault

An example of how conservative piety can perpetuate cultural blind spots that wind up facilitating sexual assault and rape:

I once heard a devout clergyman praise St. Maria Goretti for enduring with heroic silence months of harassment and threats of the young man who eventually killed her after attempting to rape her.

The clergyman was well-meaning. Maria Goretti is a saint in heaven, and he took it for granted that her behavior, being upright, was praiseworthy.

It made my skin crawl.

Maria Goretti was a devout and holy girl, one whose virtue should inspire us all. But the fact that a young girl endured months of harassment and threats in silence is not per se an admirable mark of holiness.

It can more plausibly be viewed as a tragic mark of a pious girl’s naivete and ignorance (it is possible to be both admirably holy and also tragically naive and ignorant), as well as a mark of the limitations or failings of her culture and the adults around her.

Some may find my critical comments shocking, even impious. The Gorettis were a devout family in a solidly Catholic culture. Maria has been canonized. Devout Catholics should celebrate her, her family life, and her milieu.

But I’m sure I don’t need to point out to any parents reading this that if one of our daughters were threatened, we would not want to them to endure it with the “heroic silence” praised by the clergyman in my story.

We would want them to TELL SOMEONE AND GET HELP.

This, alas, was not Maria Goretti’s understanding. We have no idea whether her parents would have wished after the fact that their daughter had come to her, or whether, if she had, they would have responded effectively or not.

Whatever the case, Maria Goretti’s cultural, domestic and educational milieu did not give her the tools we would want for our daughters to survive such a threat.

Yet it remains true that the the Gorettis were a devout family in a solidly Catholic culture. Likewise, we may be devout Catholics in solid Catholic communities. The priest I mentioned was also devout.

It doesn’t mean we don’t suffer from cultural blind spots or that we have nothing to learn from others. What have our daughters or our sons not heard from us?

If we refuse to be self-critical because we have the truth, and so any criticism of what we think and how we live is criticism of the truth, then, in the words of Thomas Merton, “what we pretend to be defending as the ‘truth’ is really our own self-esteem.”

Women who get raped are not guilty of unchastity, for God’s sake. They are victims of violence. Men like Austin Ruse help to perpetuate that violence by accusing them and those who report their stories of “coordinated attacks” on institutions that do nothing about such violence.

And men like Austin Ruse are well paid to do that.

Since he is so focused on Following the Money when it comes to the perfectly innocent Jenn Morson, I wonder: Who writes his checks?

May 7, 2018 Ask Your Doctor If the Blood of a Virgin is Right for You
Recent Comments
0 | Leave a Comment
Browse Our Archives
get the latest from
Catholic
Sign up for our newsletter
POPULAR AT PATHEOS Catholic
1

Catholic
Media are betraying the public trust by covering...
Catholic and Enjoying It!

Catholic
Elizabeth Bruenig on the Dissolution of our Culture...
Catholic and Enjoying It!

Catholic
The Standard Trump Pattern
Catholic and Enjoying It!
TRENDING AT PATHEOS Catholic