Elizabeth Bruenig on the Dissolution of our Culture of Lies

Back in 2011, the “prolife” movement that now forms the backbone of Trumpism chose to definitively commit itself to Lying for Jesus as a core strategy.  I warned at the time that this was a massively stupid idea, as did others.  We were, of course, shouted down as fake Catholics and babykillers by the Greatest Catholics of All Time as they, yet again, opted to make yet another in the long series of choices that would establish them as the most wrong subculture in American political life.

Now we are in the apex of their reign as they exalt a lying Sex Predator and his party which not only established and expanded our abortion regime, but which have re-funded Planned Parenthood eight times and are now about to confirm a drunken sex predator who says Roe is settled law (as GOP appointees always do) but who promises to protect the Sex Predator in Chief from the law.  This is what the “prolife” Christianist cultist now stands for.  Elizabeth Bruenig does the autopsy on the achievement this cult has wrought:

If Brett M. Kavanaugh’s nomination to the Supreme Court is confirmed, which I would rate as fairly likely, a significant chunk of the population will have substantial reason to argue that whatever decisions this supposedly neutral arbiter of constitutional justice hands down are influenced not only by partisan commitments but also by partisan animus. Likewise, some percentage of people will discount his rulings based on their contention that he has been credibly accused of sexual misconduct. If Kavanaugh is not confirmed, the backlash against those who come forward to make allegations of sexual assault will likely increase. And then it will all be revisited next time there’s an opening on the court. No matter what happens, in other words, the legitimation crisis will only intensify.

But it’s not really about the court. This inevitable ratcheting up is only a metastasized form of a systemic disease. In American life, politics unfolds almost entirely in a language of lies, and people know when they’re being lied to — and they hate it. (This is perhaps why our badly damaged democracy features some of the lowest rates of democratic participation in the developed world.)

The reason for all the lying is, at least in part, nonpartisan, and it has to do with the limitations of classical liberalism, meaning the philosophy that underlies our entire system of government. Because liberal democracies aim to be tolerant and inclusive of multiple conflicting versions of the good, they have to find a way for people with vast philosophical differences to talk to each other intelligibly about politics. So we have a language of public reason, as political theorist John Rawls called it, which is a rhetorical universe in which we supply reasons for our political desires that don’t really have anything to do with what we believe or want — or at least, they’re not the primary reasons for what we want. Instead, we supply reasons that we think will be persuasive to people who don’t necessarily have anything in common with us philosophically.

I believe, for example, that our society should distribute wealth differently because I think God made everything for the flourishing of all of humankind in common. I can say this because I’m just writing a column, not running in an election. If I were running in an election, I would say something about general fairness, probably, or a featureless and vaguely defined justice, “translating” my actual beliefs into something I think other people would like. In this case, the translation would be pretty faithful to the original. In many cases, it isn’t.

And everyone already knows this. This is why so much of our political discourse is about unearthing the real reasons that politicians and political movements are doing what they’re doing: Are welfare reform and union-busting really about independence and freedom, or are they about animus toward the poor? Is hawkish foreign policy really about spreading liberal democracy, or is it about enriching our tiny corner of it? Are #AbolishIce and #MeToo about limited, specific issues — correcting a particularly heinous agency, prosecuting sexual assaults even if they don’t fit the usual stranger-rape mold — or are they about dismantling larger forms of white, male hegemony? Less plausible conspiracy theories abound in the Infowars universe, but what all of these questions share in common with the panicky conjurings of Alex Jones and Co. is that they all presume politicians are not being transparent about why they do what they do.

And that assumption, I must emphasize, is true, several times over. Politicians are bought and suborned in ways they won’t admit, and ideologically committed in ways they find it difficult or inadvisable to talk about in public. The result is that we all know we’re constantly navigating a web of lies and misrepresentations that possibly have a relationship with the truth and possibly don’t. Our entire democracy functions under a noxious haze of justified mistrust. What does anyone really believe? Do they even know? Is it even possible to determine?

One consequence of living in a web of lies is that one is always on guard to defend themselves against deception. Anyone who has ever been in a relationship knows this circumstance can also be called “the complete dissolution of trust.”

What’s needed, when one political faction honestly intends to understand whether a member of an opposing political faction is guilty of a nigh-impossible-to-prove — but extremely serious — allegation of sexual misconduct, is trust. Each side has to trust that the other wouldn’t advance a scurrilous allegation for dishonest reasons, and likewise that their adversaries wouldn’t ignore a genuine allegation for dishonest reasons. Otherwise, the entire thing is an exercise in brute force: The truth is inaccessible; all that matters is which side has the power to win the day.

It’s a self-destructive cycle. I wish I saw a way out of it. If I did, I would tell you. But who would believe it?

Christians talk about “salvation by faith”.  But Christianists strategize about winning through lies.  Good job.  You won.  And nobody believes you or your gospel anymore. Who would put faith in your word or the word of the liar to whom you have utterly prostituted yourselves? Behold.  Your house is left to you desolate.  What shall it profit a man to gain the whole world and lose his own soul?

October 4, 2018
1 Percenters attempt to buy control of the Church
Next Post 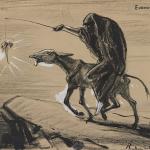 October 5, 2018 Susan Collins Gave a Masterful Account of the GOP's Betrayal and Seduction of the Prolife Movement
Recent Comments
0 | Leave a Comment
Browse Our Archives
Related posts from Catholic and Enjoying It!

Catholic
Media are betraying the public trust by covering...
Catholic and Enjoying It!

Catholic
The Standard Trump Pattern
Catholic and Enjoying It!

Catholic
This will be the emerging narrative
Catholic and Enjoying It!
TRENDING AT PATHEOS Catholic