The Incredibly Sketchy Abp. Vigano and Church Militant Have a Bridge to Sell You

The Incredibly Sketchy Abp. Vigano and Church Militant Have a Bridge to Sell You September 13, 2018 Mark Shea

When last we heard from Church Militant they were absolutely certain that shadowy forces were just about to spirit Cdl. Wuerl away to Rome in a super-secret clandestine operation, never to be seen again!  It was all breathlessly reported by that other bastion of Total Reliability, Liesite News:

“They are trying to sneak him out of the nation under Vatican diplomatic secrecy,” said Voris, noting Wuerl has backed out of a number of public events after the Pennsylvania news broke, and speculating he may be hiding at a hotel in the nation’s capital. Voris said priests of the archdiocese received a letter from Wuerl saying he was looking forward to seeing them during Labor Day weekend.

That prophecy was uttered on August 30 and Behold! All was as Church Militant foretold!!! Wuerl did go to Rome!!!!!

And then he came home again.

But the great thing about being a Faithful Conservative Catholic is that no matter how many false prophecies you utter, you never have to apologize or admit you were wrong.

We stand by our report. At the time it was unclear whether the departure was imminent or for the future, but we now know it's for the future in the case of a federal investigation, which would likely incriminate Wuerl.

You just go on saying whatever comes into your head next and your audience, as full of righteous pride as you are will never ever admit that they could be wrong either.

So, for instance, suppose some con man priest with a load of cock and bull stories about his phony military record and life of wicked, wicked sinfulness (before his transformative conversion) is caught with his pants down and tries to auction off his priesthood to his cult of personality once the jig is up? And suppose his bishop does exactly the right thing and demands his obedience? And suppose that con man priest is a right wing culture war hero who fits your constant narrative of right wing culture war while the bishop does not fit that narrative? What do you do if you are Michael Voris? Examine the facts and try to be fair to the bishop or the people pointing out that your culture war hero priest is betraying his vows?

Poppycock! You fire off a stupid video in which you first admit you do not know what you are talking about and then press on to talk about it with standard conspiracy theory nonsense. You cast the whole thing in your standard Culture War template and suggestively tell followers who the real villains and hero in this drama were. Eulogizing your con man, you declare:

He unabashedly talked about the angry homosexual subculture that controls so much of what goes on. He blasted unfaithful bishops … meaning not only the obvious ones but also the ones who quietly and cowardly sit back and let heterodoxy and heresy spread unchecked. It isn’t a stretch of the imagination to conclude many of the enemies he made and noses he got out of joint among the bishops and their lapdog media lackies are glad to see all of this going on.

And when it is shown that your con man is a scoundrel and his bishop did the right thing, and your con man’s critics where right to warn that he was ditching his priesthood and disobeying his bishop, do you apologize?

Of course not! You are Michael Voris and it is impossible for you to err! Just ask your Premium Subscribers!

So you press on for years until you finally arrive at this moment in history, when you convince yourself you have been chosen by God Almighty to spread this lunatic rumor:

Sources confirm Viganò has activated the death switch, meaning if he winds up dead, a whole cache of documents incriminating Vatican cardinals, bishops & the pope himself will be revealed.

Pray for Viganò. We can confirm he lives in legitimate fear of his life. pic.twitter.com/PXdMabn0vL

This means that either:

a) Vigano could have documented everything he claimed but simply refused before he ran away from the press that was requesting precisely what he now threatens to release. Indeed, it means that Vigano said to himself, “I know I could provide documentation of grave wrongdoing to the authorities and the press that could potentially save children from abuse, but I have selfishly decided to hide it and use it for blackmail against Shadowy Papal Forces that are, trust me, totally real”

b) Vigano is a drama queen who has nothing and is continuing to use the absolute worst right wing crackpot conspiracy theory nuthouse fake media to spread lies and gin up suckers who will believe anything in their hatred of Pope Francis.

I pick b. If you have all this stuff, Abp. Vigano, and if you know what it is and where it is and where he is, Church Militant, you absolutely owe it to us to release it right this second. Evidence. Documentation. Fact. You now assert it is in your possession or, at any rate, easily obtainable.

Why then have you not released it?

Do so, now. Or I call you a liar to your face, Abp. Vigano.  And I call you accessories, Church Militant.

Now the amazing thing is that the people who have been screaming RESIGN!!!! at the Pope (led, never forget, by Vigano himself) are suddenly full of excuses for why the accuser should not provide the documentation that he himself now is openly claiming to have.  They cut Francis no such slack, even though it meant demanding he produce evidence that, a few days ago, even Vigano was saying did not exist and may have just been a faulty memory.

More than this, the crowd of arch-conservative Super Catholics who, 20 years ago, spent their time in on-line apologetics laughing to scorn garbage like this: 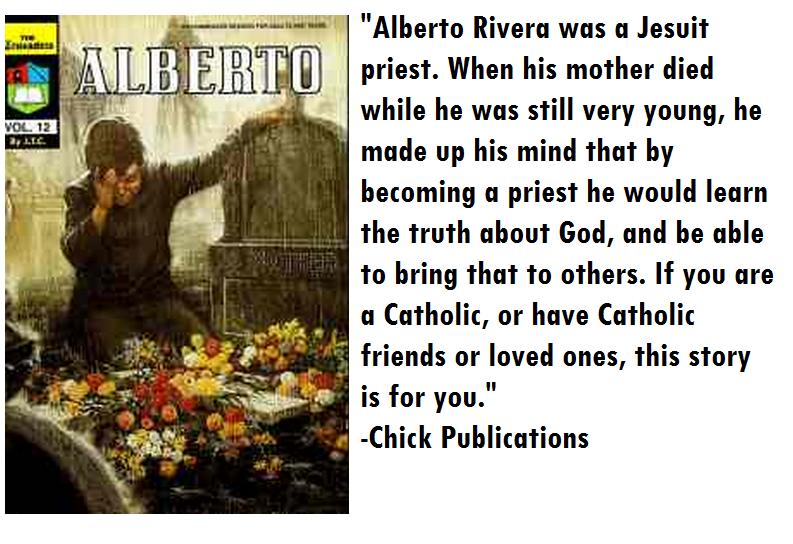 …are now the chief promoters and gullible suckers who totally believe the preposterous claim that Pope Francis is trying to murder Vigano.  Indeed, some of these lunatics were ardently promoting the claim that he murdered the two dubia promoters who died of old age (as those of us in the Reality-Based Community call it).

What Russell Moore said of his Baptist communion is even truer of Church Militant and the nutty Apologetics-Turned-Francis-Hater crowd: “The Religious Right are the people the Religious Right warned you about twenty years ago.”

Nothing, of course, will change the minds of the True Believers.  But for those of us interested in assessing facts, there is only one conclusion.  Church Militant is either a pack of liars or they are complicit in the attempt by Vigano to hide from our sight documents that both the people of God, the press, and (very possibly) legal authorities need in order to determine what may well be crimes. This makes CM (O Rich Irony) the moral equals of the bishops who likewise cooperated in concealing evidence.

If this tweet is accurate, why are they assisting Vigano in this coverup of evidence pertaining to sexual abuse?  They and Vigano owe it to us to fork over these documents right now or to tell us where they are and where he is.

Or they need to do something unprecedented for the Righteous: admit they were wrong.

September 12, 2018
A reader sent along this prescription for the Church...
Next Post

September 14, 2018 Cue "Germans, Amirite?" boilerplate.
Recent Comments
0 | Leave a Comment
"Late to the game, but while I agree with him that the end doesn’t justify ..."
Catherine Hobbs Building Bridges of Trust vs. Winning
"I also think netflix is more evil than good, the things they have and support ..."
Jackson A reader struggles with scruples about ..."
"I am pretty sure remote cooperation is evil unless with proportionate reasons..."
Jackson A reader struggles with scruples about ..."
"Just one nit - the Dickey Amendment (the bit of law that supposedly "forbids" the ..."
Jon Heresy of the Day: Antinomianism
Browse Our Archives
get the latest from
Catholic
Sign up for our newsletter
POPULAR AT PATHEOS Catholic
1