The Empire Strikes Back at Dawn Eden Goldstein

When last we left Dawn, she was challenging the principalities and powers behind the publication of Taylor Marshall’s execrable screed Infiltration. By no coincidence, Dawn’s challenge to that screed and to the vile attack on Francis by Cdl. Burke and Patrick Coffin, in which they encourage the anti-Francis Freak Show to declare his election invalid and him a papal pretender, was attacked by Austin Ruse at CRISIS!!!. Also, no coincidence is the fact that Infiltration is published by by the same machine that helps keep Austin Ruse a going concern.

For those not familiar with Ruse, he is given to spending inordinate amounts of time dwelling on the Jewishness of such women as Simcha Fisher, Jenn Morson, and Rebecca Bratten Weiss and their imagined ties to Sinister Jewish Jew of Jewishness, George Soros.  He also gave a spirited defense of Trump inviting an Austrian Nazi to his inauguration.

He is also a booster of the domestic terror group Proud Boys, which just lost in court for being a bunch of violent goons.

With credentials like that Ruse and company were naturals for striking back against Dawn for the grave sin of defending the Holy Father for not being part of the Alt-Right Freak Show.  And Ruse did not disappoint.  He blew the dogwhistles hard, defending Steve Bannon, the former head of what Bannon himself called the “platform for the Alt-right”, Breitbart, which promoted the work of actual Nazi Richard Spencer:

According to Dawn, Cash told the table that he and others had solicited publishing advice from former Breitbart Executive Chairman Steve Bannon, who had turned Breitbart into one of the largest news sites in the world. Consulting such an expert would make perfect sense. But not to Dawn. For her, this was on the order of an alt-right hate crime.

She went after the Herald for publishing rich-guy writer Taki, who refers to New York City as the Big Bagel (lots of our Jewish brothers live there). It should be noted that Taki is a frothy, lavish, and indiscriminate name-caller of all ethnic groups.

And the orcs in the comboxes took up the theme with comments that were allowed to stay up all last weekend and which make clear just who Ruse’ audience is:

There is also this contribution that appeared briefly but was taken down while the others were, as of this writing (8/25/19), allowed to remain:

So unless the OP self-deleted this but not other anti-semitic comments, it appears that someone is moderating the Crisis combox. However, the other comments remain accessible.

Additionally, we know Mr Ruse is aware of them since someone pointed them out to him on his Twitter feed yesterday and he replied that he had passed them on to management to deal with.

Nor are those all by a long shot: 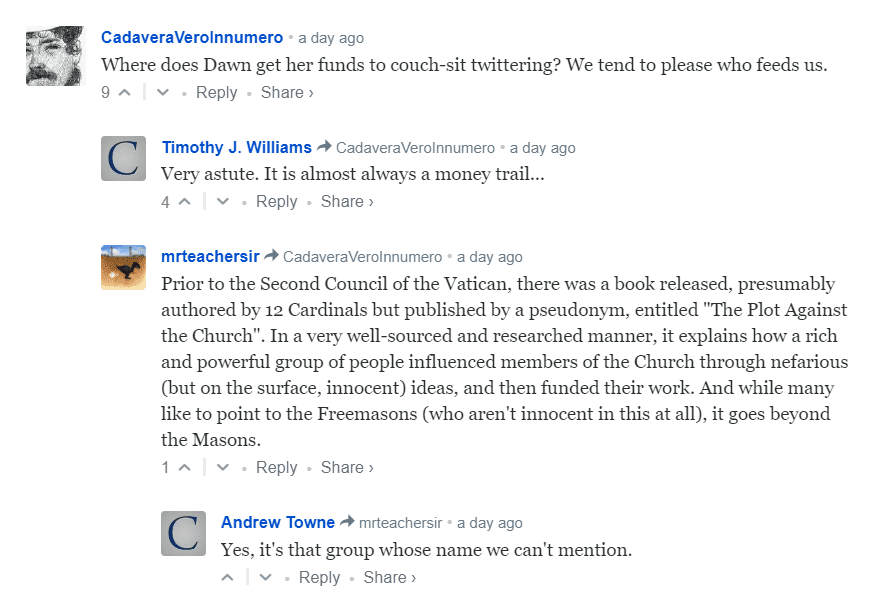 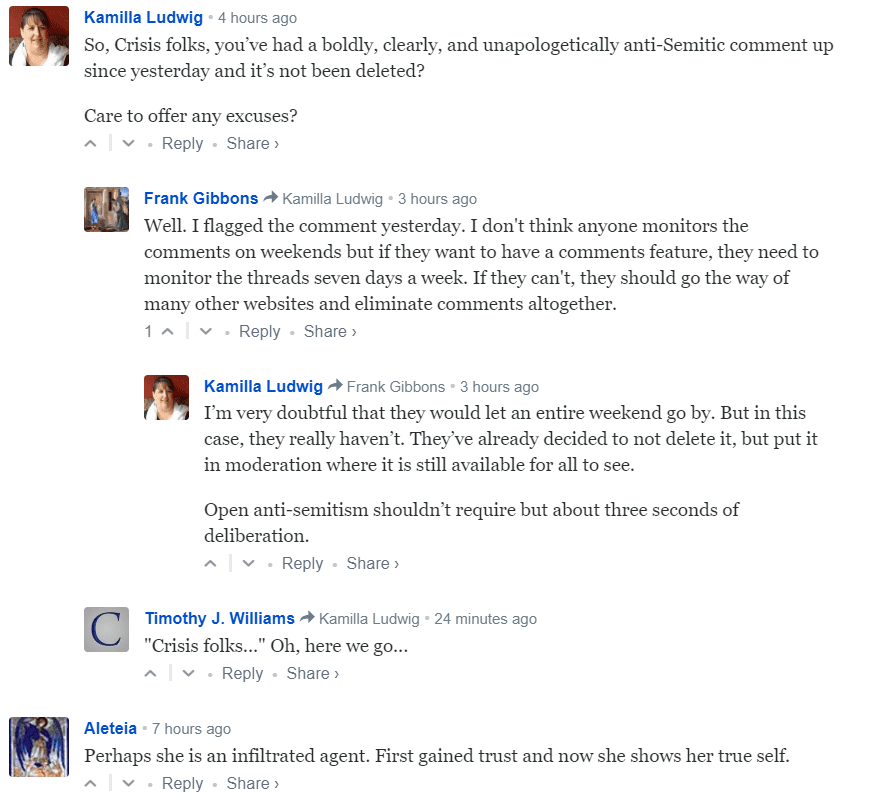 This is in addition to all the amateur psychological diagnoses,  conspiracy theorizing, Pope-bashing and so forth.  If you have access to a quick shower afterward, feel free to go look at the rest of the combox zoo Ruse’ article has attracted.  It’s not pretty.

Anyway, all that is prologue to the fact that Dawn has replied to Ruse here with typical clarity:

So, now I am being attacked for defending the legitimacy and authority of the Supreme Pontiff. Normally I would not consider an article such as Ruse’s worthy of a response. However, since friends have contacted me who were troubled by it, here are a few points readers should consider:

What Ruse doesn’t mention is that Sophia Institute Press publishes Crisis magazine, where his article appears. That’s an important piece of information that belongs in the article itself — not merely in the small print at the very bottom of the page.

What is remarkable about her reply is its calm civility in response to Ruse’ dogwhistles (and the vicious baying of the hounds he whistles up). Brava!

The dichotomy is stark.  The gospel of Jesus Christ Dawn Eden Goldstein proclaims–the authentic gospel in union with the Holy Father and the Magisterium–offers mercy and forgiveness even to such vicious enemies as these.  All that is asked is a little humility and repentance and all sinful ugliness can be washed away by the blood of Christ in the sacrament of confession.

Christianism offers nothing but racism, the worship of power, black satanic pride, and anti-semitic ugliness that has ruined the world for far too long.  Choose Jesus Christ, not this filth.

Tuesday: Marshalling the Forces of White Supremacy and Anti-Semitism

By the way, if you are interested in learning more about (and supporting) Dawn, check out her books:

August 29, 2019
The Adventures of Dawn Eden Goldstein, Part 2
Next Post

Franciscan University Responds to the Father...
Steel Magnificat
Related posts from Catholic and Enjoying It!