Why Would Anyone Willingly Choose To Call Themselves A Witch?

I have been asked many times, why I would choose to call myself a witch. Why not a more society-friendly word like a Wiccan, or a Pagan, or a Polytheist, or another ‘P-word‘? Storm Faerywolf discussed with me the power of reclaiming the magickal masculine with the word “warlock”. Jason Miller discussed with me how he prefers the word “sorcerer” to describe the intersection of a witch and a ceremonial magician that focuses on results. Why labels at all? Because it is human nature to label as much as some wish not to. Labels are an important part of language and language is a crucial aspect of magick, which is still seen in words we use today such as “spell” and “grimoire”, which is derived from the French word for grammar.

While I feel that I could take on either of these titles as well, the preferred title for what I am and what I do is still “witch”. The word “witch” is evocative, it conjures up images immediately within someone’s mind – both positive and negatively – but it is undeniable that the word “witch” has a power of its own.  Laurie Cabot writes in Power of the Witch, “To me the word Witch is a delicious word, filled with the most ancient memories that go back to our earliest ancestors, who lived close to natural cycles and understood and appreciated the power and energy that we share with the cosmos. The word Witch can stir these memories and feelings even in the most skeptical minds.”

Ironically, “witch” was a title that I was reluctant to take on almost my whole life, even when practicing witchcraft since a child and being able to fly outside of my body for many years. It wasn’t necessarily because I felt it was a dirty word or didn’t describe me – but rather the exact opposite, because I held the word in reverence. It wasn’t until I had astral initiations and deaths and knew without a shadow of a doubt that my magick worked (sometimes with just thoughts) that I felt that I had truly became a witch, instead of just a practicing occultist despite always having that attraction and love affair with everything witchy.

These days it seems that anyone who calls themselves something seems to be that. Someone who is strictly atheist, doesn’t believe in magick and just enjoys nature  can call themselves a “pagan” because they decide to or they decide to appropriate the practices and rituals of polytheistic pagans for psychological purposes. Though I’m not sure that just hugging trees, visiting stonehenge and attending burning-man makes one pagan, I’m not going to enforce my definitions on how others define themselves. However, it is for this reason I find myself feeling more and more displaced from the word “pagan” which has become so broad that it’s losing its meaning. Likewise, a new ager can call themselves a “lightworker” or a “starseed” or whatever just because they decide that they are – without putting any real work or effort into their spiritual path. You can take a weekend course and become a “master” of Reiki. While I’m not trying to necessarily hate on people who take on these terms, and I myself am a Reiki “master”, I find that terms are used so freely that they begin to lose meaning and power.

Why not Polytheist? Honestly, because I’m not sure that I fully am. Yes, I have interactions with different deities, but I’m not fully convinced they’re singular or plural. As I wrote previously on the mystery of deity, “the gods are and probably always will be the biggest mystery whom our understanding of shifts and changes as our relationship and experience with the divine does. When we think we fully understand deity, it’s a sign that we’re completely lost when it comes to understanding deity. While models are helpful, none are absolute or perfect. They help us gain an approximate understanding, but not an exact one, which may be impossible while living life as a human.”

While I believe that the nature of deity is indeed archetypal, many misunderstand this as saying that the gods are all the same, not independent beings or just internal concepts that are somehow “unreal”, which shows a lack of the understanding of the word “archetype”.  I can read Dion Fortune’s writings stating that “All gods are one God, and all goddesses are one Goddess, and there is one Initiator” and resonate with it. I can also read the writings of hard-polytheists and resonate with it as well. In the end, I do not have the authority to decide what the gods are or aren’t in a definite manner. I can experience them, interact with them and call upon them – but they will be whatever they are regardless of my opinion.

Why not Wiccan? This is something I’m asked fairly regularly. Simply put, because I’m not. While Wicca has a strong influence on almost all forms of witchcraft even if others don’t want to admit it – Wicca refers to two types of witchcraft. Wicca itself is a specific priesthood within an initiatory religion with a lineage descending from at least Gerald Gardner (if not prior as he claims) or Alex Sanders with specific non-public mysteries, secrets and beliefs that you cannot find in a book on Wicca – despite some believing you can. This Wicca holds to the belief in the power of initiation, that only a witch can make a witch.

The other form of Wicca was popularized by folks who wanted to make Wicca accessible to the public and a personal path of spirituality and religion such as Scott Cunningham’s Wicca: A Guide For The Solitary Practitioner. Yet these books still omit oath-bound information. This form of Wicca believes that a witch could become a witch through self-initiation and that it was the gods and not man who made a witch. I hold both beliefs as true. The power of initiation should not be underestimated, but it is not a requirement in my opinion and if the gods do not bless that initiation, not much really occurs here. This form of Wicca along with those who broke away from Gardner’s Wicca and decided to make their own covens and traditions led to Gardnerians and Alexandrians using the term “British Traditional Witchcraft/Wicca” to describe themselves and to distinguish their mystery tradition from others that were influenced by them but are not them.

While some aspects of my practices are strongly influenced by Wicca, they are definitely not limited to this. My personal magick is influenced by all sorts of traditions and paths of witchcraft. The traditions I have been initiated into are not Wiccan. Two of my lineages come from the Witches of Kent which had nothing to do with Gardner’s witchcraft or lineage. Another tradition that I’m in while the founders were trained in Wicca and has some Wiccan influences, do not teach Wicca itself. They’re also trained in Feri and contain Feri influences but that doesn’t make the tradition the Feri tradition. Also, my own personal gnosis and experiences do not line up nice and neatly with that of Wicca as I understand it from an outer-court understanding through books and discussing things with British Traditional Wiccans. Perhaps they would match up with the inner-court mysteries, but as I mentioned those are all oathbound secrets that are not written about or discussed to non-initiates.

Some witches call themselves left-hand pathers and are focused on self-apotheosis and self-service and aligning with darker deities, spirits and images. Some witches call themselves right-hand pathers and are focused on serving the divine, healing and helping others and shun anything remotely dark. For me, these are two sides of the same coin that I call “witch”. For me, the word “witch” is that of the crooked path – the power to heal and blight – the fluffy bunny and the dark and forbidden. It is the journey through the darkest nights and the brightest days. It is the ability to work with and befriend any entity as chosen by the witch’s discernment without the black-and-white paradigm of judgement that has been used against the witch herself. I reclaim the word “witch” with all its beautiful reverence as “the wise” as well as its vilification, all its mythology and folklore, all its history and fiction.

For me, the witch will always be something other, something that cannot be universally defined or agreed upon, because it is more than just a personal identity – it is a specific covenant or pact with the world of spirit itself – something that cannot fully be expressed through words. All these things, historical or fictional point to that something, but are not by itself that something. It is something that you must be fully in touch with your spirit and firmly within your body to take on as a title in all seriousness. It is a title of ecstatic frenzy as much as grounded wisdom.

It is the ability to have one foot in each world, a liminal quality traditionally reserved by society for those who are “out of their minds”. Joseph Campbell states that “the psychotic drowns in the same waters in which the mystic swims with delight”. I believe that the witch drowns in this water, is reborn in this water, swims in this water only to learn how to walks upon the surface of this water and dive into its depths when she chooses. For me, a witch has gone through that “shamanic death” that anthropologists discuss in these psychic waters only to emerge reborn from the cauldron of spirit and marked as such. The witch has the ability to control their ecstatic states, commune with spirits, fly beyond their body, and have a natural talent for magick that they’re constantly thirsting to improve. But most of all, the witch’s identity is in the proof of the pudding. 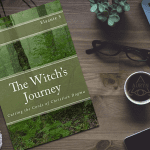 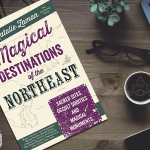 July 19, 2017 Review: Magical Destinations of the NorthEast
Recent Comments
0 | Leave a Comment
"This makes me love jack-o-lanterns even more."
Anonymous Jack-O’-Lanterns and the Devil
Browse Our Archives
Related posts from For Puck's Sake