Magic vs. Magick vs. Majick

Magic has various spellings with various significance but tends to be referring to the same thing. Why? Is it a desire to be anachronistic and seem like we’re working with something old as balls? Perhaps. Is there a reason beyond pure aesthetics? Yes, a couple. I will admit that I embrace the “k” in magic. Why? Honestly, because I grew up reading occult books that used the “k” and it’s pretty hard-wired in me. But let’s look at the differences of spelling behind the word “magic” by occultists and witches and see why they use it.

Magick
The earliest use of the spelling of “magick” that I’ve come across is that by Heinreich Cornelius Agrippa. Agrippa was a 16th-century physician, occultist and philosopher. Agrippa’s works (primarily his Three Books on Occult Philosophy) were arguably some of the most important works written in Western Occultism often being referred to as its foundation.

The spelling with a “k” was re-popularized by Aleister Crowley in the 20th-century and those groups that would later be influenced by his works. He defined magick famously as “the science and art of causing change to occur in conformity with will” in his book Magick In Theory and Practice. His public explanation for the spelling was to distinguished this with the magic of fairytales, folklore and stage magician slight-of-hand.

Some occult practitioners today still prefer the “k” feeling that the magic which they work with is the same as the magic of folklore and legend. Some feel that witchcraft involves cunning and trickery as well, so they also see an intersection with their arts and that of the sleight-of-hand magician such as Harry Houdini who was very popular at the time. However, this isn’t the only reason for the spelling of the “k”. In the forward to the 1973 edition of Magick In Theory and Practice by Aleister Crowley, Kenneth Grant and John Symonds explain a bit more into the reasons why Crowley used the “k” in their preface of the book.

“The Anglo-Saxon k in Magick, like most of Crowley’s conceits, is a means of indicating the kind of magic which he performed. K is the eleventh letter of several alphabets, and eleven is the principal number of magick, because it is the number attributed to the Qliphoth – the underworld of demonic and chaotic forces that have to be conquered before magick can be performed. K has other magical implications: it corresponds to the power or shakti aspect of creative energy, for k is the ancient Egyptian khu, the magical power. Specifically, it stands for kteis (vagina), the complement to the wand (or phallus) which is used by the Magician in certain aspects of the Great Work.”
– Kenneth Grant & John Symonds
Praface to Magick In Theory and Practice (1973 Edition)  by Aleister Crowley

Majick
Laurie Cabot and a lot of Salem witches use the spelling “majick” for the word magic. Sometimes people are taken back by this question and I’ve had many people ask me why she chooses this spelling. Laurie points out the significance of numerology in occultism and the importance that different number vibrations hold within esoteric studies. In Laurie Cabot’s Book of Shadows she explains that she chose the spelling of “majick” for similar yet different reasons that Crowley chose “magick”. Her explanation is that the letters of “majick” add up to the number two in numerology. She explains the significance of this a bit more in regards to the Cabot Tradition of Witchcraft:

“Two is one of the primary numbers of majick, being the number of polarity and balance. Two signifies Yin and Yang, Goddess and God, light and dark, creation and destruction. The vocations of those associated with this number as their “life path” includes healers, teachers, counselors, and creative artists such as musicians, designers, and architects. All of these relate to our association with the Witch as healer, spiritual teacher, religious counselor, artist, ritual musicians, and even designers of temples and sacred sites. The number two, and therefore majick, has the theme of the Witch, of majickal creation, embedded right in it. We spell majick this way to keep its meaning even more special to us, to remember these things.”
– Laurie Cabot
Laurie Cabot’s Book of Shadows

The Correct Spelling
So what is the correct spelling of the word? Who cares? Spell it however you want. Spell it madjuk if you want. The more important thing is that your magick works. While some people may think that the spelling of “magick” or even “majick” comes across as silly, Laurie Cabot is one of the most powerful witches I have ever had the pleasure to know and I promise you that she has more majick in her fingertip than that of most witches that I’ve met have in their whole body.

While different practitioners may have different reasons to spell something the way they do, there is meaning behind the coinage (or in Crowley’s case revival) of how the word is spelled. I still see people argue about how the word should be spelled today and feel that they should be more concerned with how their magick is working instead of trying to police or correct the magic/magick/majick/madjuk of others. They may have reasons for using the spelling that they do that you aren’t aware of. Regardless of how we spell magic, the world definitely needs more of it. 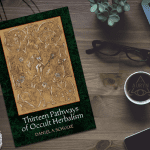 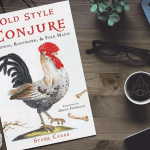