Jaclyn Cherie is an Author, Word Alchemist, Seer, Witch, Intersectional Feminist, Luciferian, Torchbearer, Animist and Wild Woman. She’s also the face behind The Nephilim Rising. As a lifelong, hereditary Witch with over 20 years of hands on experience, Jaclyn draws wisdom from her Ancestors and Spirits beyond the veil. She is proficient in various forms of the Craft focusing mostly on traditional Witchcraft and folk Magick. Eastern Philosophy, particularly Hinduism, has played an integral role in shaping who she is and what she believes, as well. She is influenced heavily by Mighty Hekate, deities of Death and liminal spaces; she acts as a key to the other side and is a conduit for their messages.

Finding her Muses in the most unusual places and people, she strives to tell raw, real stories of Magick, the human condition, Sacred Sex, Women’s Issues and, her favorite topic, rebellion. Besides her work on The Nephilim Rising, her words can be found on The House of Twigs, WITCH and Dolmen’s Grove Chronicles. She is an instructor for the online Witch School launched by The House of Twigs, as well as a small business owner where she creates trinkets, tools and talismans for the Modern Mystic and Witch. Her published works include Lucifer: The Light of the Aeon, Songs of the Black Flame and Inanna’s Ascent: Reclaming Female Power.

You’re a self-described Luciferian Witch. What does that mean to you?

I get asked this question a lot, and whenever I answer people I am usually met with a blank stare; followed by, “that’s it?” The response is usually one of disappointment on their end, and amusement on mine. I think people want me to tell them I sold my Soul to the Devil, made some pact with a Legion of Daemons, practice only baneful Magick, and/or pretty much embody all things dark. The latter may be true, but the rest is shit. This is how I break it down: Luciferianism is what I believe (my Philosophy), and Witchcraft is what I practice. When people think of Luciferians’ they usually have this stereotypical “white dude magick” type energy in mind (like the stereotypes that follow Chaos Magickians) and then, of course, their only point of reference is Michael Ford. I like Ford’s work, for what it is, but I think Luciferianism is far more pliable than he suggests; this truly is a path for the individual. As a Spiritual Luciferian, and a polytheist, these are the pillars I live by: personal responsibility, claiming my Power, speaking my truth (at all costs), living my truth (no matter the cost), following no creed, and always maintaining individual sovereignty.

Do you see Lucifer as a literal spirit, an archetype, both, or neither?

I see Lucifer as a literal Spirit and an Archetype, absolutely. I believe throughout history and mythology there are stories like Lucifer’s; Prometheus, Horus, Melek Taus and so on. But they are very much their own individual Spirits’. For me, Lucifer, and light-bringers in general, represent illumination of the unseen, enlightenment, rebellion, justice and truth. As far as Archetypes go, in many cases they are egregores that teach us lessons; profound lessons. I believe that mythology was written with purpose, and the stories and energy they created are essential entries (keys) into the Occult.

What do you think other witches’ biggest misconceptions are about Lucifer?

People believe Lucifer is the Devil, plain and simple—it isn’t limited to Witches’ or Pagans, it’s just engrained into people’s minds. Even people who don’t believe in the Devil. For the record, I do not believe in the Devil, nor do I believe that Satan is one specific being. The Devil is a Judeo-Christian creation, and Satan stems from the Hebrew term Ha-Satan meaning “opponent” or “adversary”. To believe in these would mean that I would have to also believe in their god, or some omnipotent power that the Devil and/or Satan is fighting. I interpret Satan as being a state of mind (a consciousness), a way of life and primal energy; it’s the embodiment of opposing the status quo, opposing this patriarchal system we live in.

When most people think of Luciferians or Satanists, they think of atheists or self-worship. But you also work with Dark Goddesses too and you worship deities, right? Can you touch upon this a bit more?

I love this question. Worship is a complex, tainted word, let’s just throw that out there. There are blogs I have written where I state how I worship no deity, simply because I don’t want to explain my type of worship to anyone; worship doesn’t always equate submission. I do self-worship and, for me, to honor (worship) myself means that I honor my Spirits. I have never had to compromise who I am to honor or work with a Spirit, Daemon or God. I very much work with the Dark Goddesses, in all their forms, and their lessons have been paramount in molding me as a Witch and Woman.

For example, I have entered into a lifelong, working relationship with La Santisima Muerte (after her calls could be ignored no longer) which is 100% devotional work, and that’s okay because she doesn’t require me to go against my belief’s—she teaches me how to be more authentically myself by forcing me to be present in the moment because she’s always near and with one swing of her scythe I will cease to be. She’s also forcing me to learn a second language, which is never a bad thing.

The most Sacred part of my path though, is my relationship with Shiva, and I do worship him; not only have I tattooed my body in his honor, I practice Puja (worship) daily for him, and wear Rudraksha in his honor. His Mantra, Om Namah Shivaya breaks down as: Om- Before there was a universe, there was (and is) the Great void of existence. Out of this void came the vibration which started the universe, which is known as Om. Namah- This literally translates to bow. Shivaya- This, of course, means Shiva; but more than that, it means the inner self. When understood fully (and per Shaivism), it means “I bow to the inner Self”. Is becoming one with our inner/higher self not the end goal? It is for me.

The online community you’ve created, The Nephilim Rising, is wildly popular among witches. Why did you choose that as a name?

Ah, the infamous question. Well, the main reason I chose the name was from a dream I had, and I do not tell that to anyone. Sorry, folx! Plus, I like to keep a little mystery. I believe in the Anunnaki-Nephilim connection, I subscribe to some Ancient Alien theories and I believe there are Nephilim walking this Earth and like mythology states, they are here to teach man again, but this time instead of teaching trades and crafts, they are helping mankind remember who they are. And I can say with certainty, the Nephilim are rising.

Of course, it carries over into my Craft! Especially because parts of my Craft are practices rooted in specific cultures, and/or borders cultural appropriation. Above all else, I like to be educated about whatever practice I learn directly from the source (oral tradition and folklore are my foundations). I believe respect should be shown for the culture being borrowed from, and acknowledgment of my own privilege should be at the forefront of my mind. Privilege doesn’t just translate to what we practice, but it translates to how we practice; not everyone has access to metaphysical goods/tools. That’s a very basic example but it shows how deeply rooted privilege is; if it affects the small things, imagine how it impacts the bigger issues? Intersectionality is important for a myriad of reasons.

You teach a course on Shadow Work. What is shadow work and why is it important?

Shadow work is a term first coined by psychoanalyst Carl Jung, and that’s what led me to the spiritual world at large; it was psychology, not philosophy. Our Shadow-Self is the part of ourselves that we tend to hide from the outside world; it can be traumas, lies, delusions, memories, shattered dreams, etc. The Shadow is something that is almost by nature suppressed, and we must learn to integrate it into our whole being; society teaches us that darkness, heavy emotions, and trauma are all inherently bad, and so we push these feelings down. Shadow work is reprogramming Self to understand Shadow is as necessary as light; one wouldn’t exist without the other. This is important work because when we deny the Shadow, it will manifest in some nasty ways.

Who have been the largest influences on your witchcraft?

I have a wide-range of influences, but it started when I found two of my Mom’s Starhawk books as a kid, they were game changers for me. From there I read anything and everything, picking up pieces along the way to create my own Craft. I am influenced by the founders of modern Magick like Fortune, Valiente, Crowley, Chumbley, Dee, Kelly etc, but I like to hear new voices. So, I would say that I identify most with the works of Jason Miller, Aidan Wachter, Danielle Dulsky, Laura Tempest Zakroff, S. Connolly, Sarah Anne Lawless and Sorita d’Este.

Any projects, courses, events, or books we can look forward to in the future?

Yes! I am currently working on my Luciferian Witchcraft Course which will be launching on The House of Twigs School of Ritual beginning of next year. I have another essay being published in an upcoming Girl God anthology on Lilith. I am working on a book that focuses on the Dark Goddess from the LHP perspective (written alongside the rebels who I wrote my first two books with). Also, I am working on my first piece of fiction which will be a collection of adult stories centered around the Major Arcana. There’s lots brewing in the cauldron, and some stuff I can’t yet disclose! 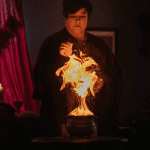 December 8, 2018
Elizabeth Autumnalis On Growing Up As A Witch & Land Spirits
Next Post 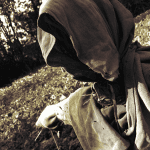 December 11, 2018 The Child-Eating Scarecrow Of Christmas
Recent Comments
0 | Leave a Comment
"This makes me love jack-o-lanterns even more."
Anonymous Jack-O’-Lanterns and the Devil
Browse Our Archives
Related posts from For Puck's Sake