Passing On The Magick To The Kids

Passing On The Magick To The Kids December 23, 2020 Mat Auryn

When I wrote Psychic Witch, I dedicated it to the four largest influences in my life in chronological order that they influenced me: Silver Ravenwolf, Christopher Penczak, Laurie Cabot, and Devin Hunter with a note to each.

“Silver, your work opened up a world of possibilities when it came to magick and witchery for me as a child. Your work alone was a gateway that jump-started my path of spirituality. Most of all, I learned not to limit my dreams based on what seemed “realistic.” As a child, I would tirelessly (and sometimes obsessively) copy the information from your books with that little crescent moon on the spine into my own notebooks and eventually my first personal Book of Shadows. I dreamed of someday writing and publishing my own book with that Llewellyn logo on it, and here I am with my own, having achieved what seemed unrealistic. Thank you for the monumental impact that your work has had on my generation of budding witches and those before and after me.”

– From the Dedication in Psychic Witch

When I was about eight years old I came across my first Silver Ravenwolf books and she quickly became my hero. I used to write her letters and send them off to her in the mail. She’s still someone I deeply respect and admire to this day and she holds a very special place in my heart. I doubt she expected someone so young to be reading her books, just as I never expected anyone that age to read mine. However, I recently received the most magickal letter in the mail from a special eight year old kid named Kai. I can’t adequately express how much this letter meant to me, how it touched my inner child. This interaction will be with me my entire life. I wanted to share this interaction with you, in hopes that it will touch your inner child as well. Here’s his letter verbatim, shared with permission from his mother.

I love your book Psych Witch. I am ^pretty intrested in the subject of witch craft. My cousin says it is fake. One time I lost my wand in Maine he sayed “You can find another stick outside” & he sayed magic does not exist. But I pay him no mind. He is jelous. Thank you for putting Enchanted in your book. My cousin & I went there. There is a place called the Witchery where they sell brooms. I am raising money to get a broom.

Can we take a moment to applaud his use of the Earth element symbol when signing his name? I love that! His mom wrote to me that he had went to Enchanted Shop bringing his copy of my book hoping to see me there, but unfortunately I had already moved to the West Coast at that time. She told me that she had discovered me through Kai and not the other way around. I shared his letter on social media and sent my friend Penny a message asking if she could make him a special wand, since she’s fantastic at making them. Here’s the wand she made for Kai:

She attached to it a note:

“Wand of Joy –
Clear quartz point, applewood branch with cobalt blue glass for strength, amethyst stone for balance and guidance. Always use this wand for the good of all.
– Made with majick by Penny Cabot for Kai.”

I asked her to leave it at Enchanted and then contacted both Enchanted and The Witchery to set a few more things up. I then wrote a letter back to Kai along with a signed copy of my book and some stickers:

Thank you for your letter and your amazing artwork. I’ve already hung it up on my wall right next to my computer. You are such a talented artist! There will always be people who will tell you that magic isn’t real. But we both know better than that, don’t we? I’m sorry that you lost your wand, but your cousin is half-correct. Sticks can be very magical wands! Every part of a tree is very powerful and can be made into a very powerful wand if you put your energy into it. Remember that the real magic power is inside of you and in nature! I shared your letter with some of my other witch friends and they thought you were really cool and all agreed you were one of the best artists they’ve seen. Your cursive is also really good too!

I told my friend Penny that you had lost your wand in Maine. She’s a very powerful witch and makes the most magical wands. She’s also a very talented artist, just like you. She’s the daughter of Laurie Cabot, who is the Official Witch of Salem, and one of the most famous witches in the whole world. Penny thought that you needed a very special wand and made one just for you. There is not another wand like it in the world! Like all magic though, it can only cast spells that are for good and not to ever hurt anyone.

The wand is waiting for you at Enchanted Shop. There’s also a $200 credit balance waiting for you so that you can stock up on some magical tools and supplies. Chris, the owner of Enchanted, remembers you and paid for half of that credit balance. My other friend who is also a witch named Mortellus, also thought you were a super special kid. She’s sending me a package of magical things that she made just for you. My other friend Kelly thought you needed some special crystals and stones for your magic. I’ll be sending both of their gifts to you very soon.

I heard that you came to Enchanted with your copy of Psychic Witch and I wasn’t there. I moved to California at the beginning of the year. If I was still there I would have signed your book. Since I’m on the other side of the country, I’ve included a signed copy of my book with a very special magical blessing that I wrote in it just for you. I also put in a bunch of Psychic Witch bookmarks for other books. Reading a lot of books is a sign of a good witch.

I know you’re saving up for a broom at The Witchery. I’ve been there several times and they make the coolest brooms! I talked to the people at The Witchery, and right now they aren’t making brooms because of Covid and are waiting until the weather warms up to do it safely outside so that nobody gets sick. But I’ve set it up so that when it does get warmer you can go make a broom of your own!

Here’s some of my secret tips to help your magic, some that have helped me a lot that I wanted to share just with you:

1 – Always use your magic to help people and never ever to hurt them. There’s not a single problem that can’t be solved with a solution that is helpful instead of hurtful. Sometimes it just takes some creative thinking! I can already tell that you’re super smart and I know you’ll be able to come up with some wise magical solutions that are good for everyone.

2 – Practice your meditation. It will help you to learn how to focus your magical energy. Meditating while holding a crystal will help speed this up!

4 – Always treat other people and animals with kindness and respect and be as helpful as much as you can whenever possible. The Universe loves helpful people and will give you more magical power as you prove that you can use it wisely and in kind ways.

You are such a cool kid and I predict really great things for you in your life. Keep following your heart and your life will be filled with more magic than you can even imagine!

UPDATE: Kai’s mom sent me this picture of Kai opening his package I sent him. Look how happy he looks!

About MAT AURYN
Mat Auryn is a witch, professional psychic, and occult teacher. He is the author of the internationally best-selling book, 'Psychic Witch: A Metaphysical Guide To Meditation, Magick, and Manifestation'. He is a High Priest in the Sacred Fires Tradition of Witchcraft. As a psychic witch, Mat has had the honor and privilege of studying under some of the most prominent witchcraft teachers, elders, and witchcraft traditions. He runs the blog For Puck’s Sake on Patheos Pagan, is a content creator for Modern Witch, has a column in Witches & Pagans Magazine entitled 'Extra-Sensory Witchcraft', and a column in Horns Magazine. He has been featured in various magazines, radio shows, podcasts, books, anthologies, and other periodicals. You can read more about the author here.
Previous Post 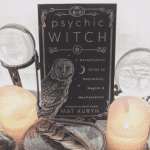 December 11, 2020
Occult Writer's Block and True Will
Next Post

March 7, 2021 Review: Weaving Fate
Recent Comments
0 | Leave a Comment
"This makes me love jack-o-lanterns even more."
Anonymous Jack-O’-Lanterns and the Devil
Browse Our Archives
get the latest from
For Puck's Sake
Sign up for our newsletter
POPULAR AT PATHEOS Pagan
1

There is Freedom in the Vastness...
John Beckett
Related posts from For Puck's Sake