Occult Writer’s Block and True Will

Before my book Psychic Witch came out, I already had plans for book two. I knew what I wanted to write about. I saw a gap in occult literature that I thought I could potentially fill. Excited, I sent a proposal to my editor at Llewellyn and shortly got a contract for the book. I began writing the book but found myself hitting writer’s block. It wasn’t that I didn’t know what I wanted to write about in the book or didn’t know the material that I wanted to teach, but something just felt off and I found myself feeling resistant to writing it.

This was greatly increased by the unexpected success of Psychic Witch, which soon became an international bestseller in only a few months with several translations of it in print or in the works, and the original English version selling faster than Llewellyn could keep up with in regards to printing enough, fast enough to supply the demand. Its success still feels completely surreal and is far from anything I could have predicted.

Suddenly, people began asking me how I’m handling the pressure of writing a second book that would live up to the success of how Psychic Witch was received, something I began worrying about as well. This only increased my resistance to writing it.

I began reviewing my personal criteria and standards that I held myself to when setting out to write Psychic Witch, to see if there was something missing:

Expressing this concern, a friend presented this amazing TED Talk by Elizabeth Gilbert (the author of Eat, Pray, Love) dealing with these same questions after her book’s high level of success and the depression and pressure she felt to write anything after it. I found the video incredibly helpful and it was something that I deeply needed to watch:

One of the things she discusses is the concept of the Genius in Roman pagan culture, which is equivalent to the idea of the Agathodaimon of Greece. These along with a few other ancient paralleled concepts such as the Fravashi of Zoroastrianism are the root of the modern occult idea of one’s Holy Guardian Angel discussed in the work of The Book of Abramelin by Abraham of Worms, which was first translated by Samuel Liddell MacGregor Mathers, co-founder of The Golden Dawn. The concept was later popularized even more in occultism by the work of Aleister Crowley, where the Holy Guardian Angel of the individual is a central theme and whereby knowledge and conversation is a primary aim within Thelema and Thelemic occult orders.

We can parallel this concept with the Higher Self, which I discuss in my book, though there’s division among occultists on whether or not the Holy Guardian Angel was a subjective experience of the Higher Self which presents itself as an objective experience, or whether it was purely objective and different from the individual completely. Crowley himself goes back and forth on whether his Holy Guardian Angel was his Higher Self or not throughout his life, as does Carl Jung with Philemon, whom I believe was Jung’s HGA. As a hermetic witch, my belief is that it’s most likely both. In my book Psychic Witch, I devote a whole chapter to the Higher Self and the concept of True Will and discuss these concepts throughout the book. In a nutshell:

“The role and mission that the Higher Self is looking to fulfill is its purpose of incarnating onto the planet. This higher purpose—the desire of the Higher Self—is often referred to as the True Will, meaning the primary drive of the Higher Self for this incarnation. Occultist Aleister Crowley coined the term True Will. Being in alignment with your True Will doesn’t mean that life will be easy or free of conflict, and not everyone will discover or fulfill their True Will in a lifetime. Your True Will is not one singular thing to accomplish, but I think it’s better to think of it as a journey instead of a destination. Being in alignment with your Higher Self is like having a compass that will help direct you along that journey. To come to know our True Will, we must transcend the ego and the Middle Self’s desires. Crowley referred to the desires and wishes of the ego and external motivations as the “lust of results” and stated that True Will should be fulfilled without resistance or the lust of results.”
– Mat Auryn
Psychic Witch: A Metaphysical Guide to Meditation, Magick, and Manifestation

“Concentrate on “Thou hast no right but to do thy will.” The point is that any possible act is to be performed if it is a necessary factor in that Equation of your Will. Any act that is not such a factor, however harmless, noble, virtuous or what not, is at the best a waste of energy.”
– Aleister Crowley
Magick Without Tears

So I began meditating on my True Will in regards to the book further and expanding on the question within my criteria related to True Will. This time I reframed my question to ask “What is the higher purpose and higher spirit of this second book? How does it serve my soul’s purpose aside from being helpful to those seeking to learn magick or merely filling a gap in occult literature? What is the important purpose I wish to make within the writing, even if it’s widely hated, criticized, doesn’t sell and I never write another book?”

You don’t need to believe that writing on occultism is part of your True Will to write occult books. For me though, I truly feel it is for myself, which is both super personal and at times intensely and overwhelmingly humbling. I don’t think I’m somehow important for feeling that writing on the occult is part of my True Will. In fact, it’s often annoying such as this situation. Everyone’s True Will is equally important regardless of what that True Will is and how spiritual or secular that True Will may be.

So I meditated on this for days and then suddenly it struck me, I realized what my higher mission for this book was that I was missing, how the approach needed to slightly change to bring it into alignment with what I believe to be my True Will. The problem was that I was asking myself the wrong questions all along. Then, just like magick, the writer’s block completely lifted by slightly shifting how I was approaching the topic. I share this because I know a lot of writer’s come up against writer’s block, and I feel there’s a slight difference and pressure when your writing is on subjects integral to and an extension of your personal spirituality. I hope that laying all of my thoughts and my struggles regarding “Book Two” will be helpful for some people out there writing their own books and dealing with similar issues.

About Mat Auryn
Mat Auryn is a witch, professional psychic, and occult teacher. He is the author of 'Psychic Witch: A Metaphysical Guide To Meditation, Magick, and Manifestation'. He is a High Priest in the Sacred Fires Tradition of Witchcraft. As a psychic witch, Mat has had the honor and privilege of studying under some of the most prominent witchcraft teachers, elders, and witchcraft traditions. He runs the blog For Puck’s Sake on Patheos Pagan, is a content creator for Modern Witch, has a column in Witches & Pagans Magazine entitled 'Extra-Sensory Witchcraft', and a column in Horns Magazine. He has been featured in various magazines, radio shows, podcasts, books, anthologies, and other periodicals. You can read more about the author here.
Previous Post 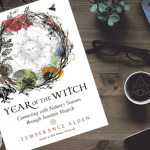 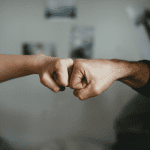 December 23, 2020 Passing On The Magick To The Kids
Recent Comments
0 | Leave a Comment
"This makes me love jack-o-lanterns even more."
Anonymous Jack-O’-Lanterns and the Devil
Browse Our Archives
get the latest from
For Puck's Sake
Sign up for our newsletter
POPULAR AT PATHEOS Pagan
1

How Do I Know If A...
John Beckett
Related posts from For Puck's Sake