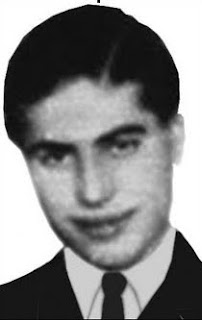 Bartolomé Blanco Márquez was born in Pozoblanco, Córdoba Province, Spain in 1914. He was arrested as a Catholic leader—he was the secretary of Catholic Action and a delegate to the Catholic Syndicates—on Aug. 18, 1936. He was executed on Oct. 2, 1936, at age 21, while he cried out, “Long live Christ the King!” Born on 25 November 1914, Bartolome was orphaned as a child, and raised by family with whom he worked. He was an excellent student, studying under the tutelage of the Salesians. He also served as a lay catechist, and at 18 was elected youth secretary of Catholic Action in Pozoblanco. On 18 August 1936, Bartolome was imprisoned while on military leave for refusing to be mobilised in the government’s armed forces against Franco‘s military rebellion of July; on September 24 he was moved to a prison in Jaen. There he was held with fifteen priests and other laymen; judged, condemned to death and shot on October 2, 1936, charged with refusing to serve in the army in time of war. Márquez was beatified 28 October 2007.
(From Wikipedia)
Previous Post

October 2, 2009 Mother Benedict Duss (1910-2005)
Recent Comments
0 | Leave a Comment
"Wow! I didn't know about that Statement from the US Bishops. The fact that they ..."
Florence Ziegler “It’s About Time They Got Here”:  Catholics ..."
"Very interesting. Why did the Jesuits change the name of the school from a saint's ..."
Kristin Nealon Wilson Ocds Who’s Buried in Catholic Cemeteries?
"It is a joy to that you are back blogging. Thanks for the reference to ..."
Joe A Church Historian’s First Communion
"Thank you for all your enjoyable, informative posts on Church history. I agree that the ..."
Kathleen Brady Looking at the Scandals– A Church ..."
Browse Our Archives
Follow Us!

Official Catholic Church Teaching on the...
The Shoeless Banshee: Meanderings Beyond the Pale
Related posts from McNamara's Blog