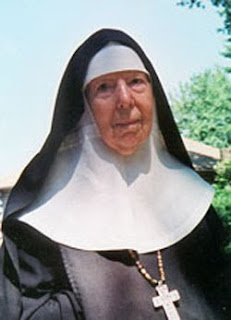 Today marks the death of Mother Benedict Duss, foundress of Regina Laudis Monastery in Connecticut. Born Vera Duss in Pittsburgh, her family moved to France when she was very young. In 1936 she earned a medical degree from the University of Paris. She then entered a Benedictine abbey outside Paris, taking the name Sister Benedict. But her dream was to establish a Benedictine monastery for women in America. In 1946, she returned to America. Soon Robert Leather, a Protestant businessman, offered Sister Benedict fifty acres of land and an abandoned factory building which would become the main monastery building. In 1976, the Vatican elevated the Monastery to an Abbey and it became known as the Abbey of Regina Laudis. Mother Benedict was given the title of Abbess, the only American woman religious to be so honored. The trials and tribulations of Mother Duss during establishment of the abbey inspired a popular Hollywood movie, “Come to the Stable” with a script by Clare Boothe Luce and starring Loretta Young and Celeste Holm was released in 1949. (She was succeeded as Abbess by Mother Margaret Patton, granddaughter of General George S. Patton.)
(Adapted from the biography Donald Greyfield on Find a Grave)

October 2, 2009 Blessed Jan Beyzym (1850-1912)
Recent Comments
0 | Leave a Comment
Browse Our Archives
get the latest from
McNamara's Blog
Sign up for our newsletter
POPULAR AT PATHEOS Catholic
1