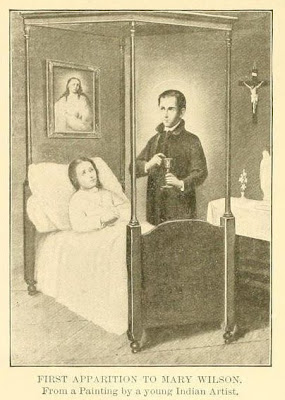 The Academy of the Sacred Heart in Grand Couteau, Louisiana is one of America’s oldest Catholic schools. Founded by the Religious of the Sacred Heart in 1821, the school has also been a local pilgrimage site since the end of the Civil War, when it witnessed a miraculous healing that led to a saint’s canonization. In the fall of 1866, Mary Wilson, a twenty-year-old convert who had just entered the convent, became seriously ill and was believed to be near death. She began a novena (a series of prayers said over the course of nine days) to Blessed John Berchmans, a seventeenth-century Flemish Jesuit to whom many of the sisters had a strong devotion. Sister Mary was miraculously cured after having a vision of Berchmans. In a statement for an ecclesiastical tribunal, she described her amazing experience:

On the 19th of October I was obliged to report to the infirmary, and I did not leave it until the 15th of December, the day after the one on which God was pleased to manifest His Power and Mercy in my behalf. During all this time I was dangerously ill, vomiting blood two and three times a day, with constant fever and violent headaches the greater part of the time; and still the pain in my side continued.

I do not think I had eaten an ounce of food for about forty days. During that time I had taken nothing but a little coffee or tea, which for a week before I recovered I could no longer take. And for two weeks no medicine had been administered. The doctor said it was useless to torture me more. So, he stopped giving me any. The last two days I was unable to take even a drop of water. I endured the pangs of death. My body was drawn up with pain; my hands and feet were cramped and as cold as death. All my sickness had turned to inflammation of the stomach and throat. My tongue was raw and swollen. I was not able to speak for two days. At each attempt to utter a word, the blood would gush from my mouth.

Being unable to speak, I said in my heart: “Lord, Thou Who seest how I suffer, if it be for your honor and glory and the salvation of my soul, I ask through the intercession of Blessed Berchmans a little relief and health. Otherwise give me patience to the end. I am resigned.” Then, placing the image of Blessed Berchmans on my mouth, I said: “If it be true that you can work miracles, I wish you would do something for me. If not, I will not believe in you.”

I can say without scruple of fear of offending God: I heard a voice whisper, “Open your mouth.” I did so as well as I could. I felt someone, as if put their finger on my tongue, and immediately I was relieved. I then heard a voice say in a distinct and loud tone: “Sister, you will get the desired habit. Be faithful. Have confidence. Fear not.”

I had not yet opened my eyes. I did not know who was by my bedside. I turned round and said aloud: “But, Mother Moran, I am well!”

Then, standing by my bedside, I saw a figure, He held in his hands a cup, and there were some lights near him, at this beautiful sight I was afraid. I closed my eyes and asked: “Is it Blessed Berchmans?” He answered:” Yes, I come by the order of God. Your sufferings are over. Fear not!” For the glory of Blessed John Berchmans, whose name be ever blessed! I deem it my duty to declare here, that from the moment of the cure I never experienced the slightest return of my former ailments. My flesh and strength returned instantaneously, I was able to follow all the exercises of community life from that moment. So that, after two months of cruel suffering and great attenuation of bodily strength from the want of food, I was in an instant restored to perfect health without a moment’s convalescence and could eat of everything indiscriminately, I who for thirty-eight days previous could not support a drop of water.

The doctor called to see me that evening, and what was his surprise to see me meet him at the door. He was so overcome that he almost fainted, and Mother, perceiving it, said: “It is you, doctor, who needs a chair!”

Her doctor later stated that he was “unable to explain the transition by any ordinary natural laws.” In 1888, Pope Leo XIII accepted Mary Wilson’s healing as the final miracle needed for the canonization of St. John Berchmans.