But they harbored a secret, one that by nineteenth century white America’s standards was considered terrible. Their mother Eliza Clark had been a slave on their father’s plantation. Although Michael and Eliza had a committed, exclusive relationship, Georgia banned interracial marriage and defined their children as slaves. 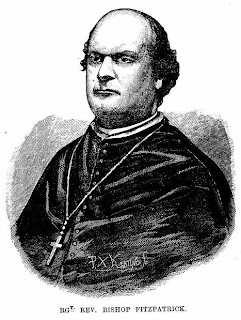 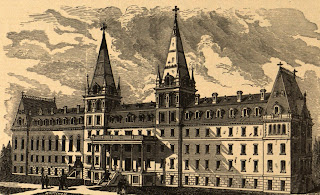 The College of the Holy Cross, founded by the Jesuits in Worcester, Massachusetts, in 1843.

It wouldn’t be easy, because many white Catholics, clergy included, shared the prejudices of the day. But Bishop Fitzpatrick and the Holy Cross Jesuits did all they could to help the Healys. The bishop sponsored James and Sherwood for his diocese, and Patrick joined the Jesuits. Because no American seminary would take them, they had to study abroad, in Canada and Europe. (Their sisters had to travel to Canada to find a religious community that would accept them.) 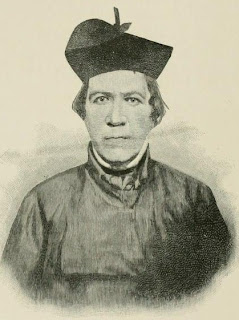 At Holy Cross, Father George Fenwick, S.J, was a father figure to the Healys. They referred to their own parent as “Father,” but in their correspondence they addressed Fenwick as “Dear Dad.”

In June 1854, James became America’s first Black priest, but this information was never made public. Boston priests knew and commented on it among themselves, but Bishop Fitzpatrick supported Healy, placing him in key administrative roles such as chancellor (a sort of chief operating officer) and his personal secretary. As James’ ability became evident, comments became fewer. He also served as pastor of St. James Church, one of Boston’s largest parishes. 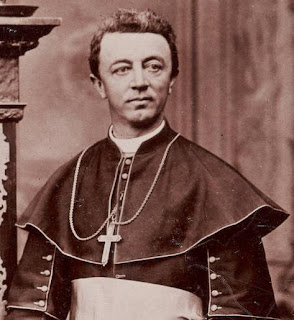 In 1875, he became Bishop of Portland, Maine. For twenty-five years, he provided capable, quiet leadership. Initially some priests objected to what they called his “indelicate blood,” but the people knew little of it. In 1900, a Portland paper wrote that he enjoyed “the esteem and respect of the community.” 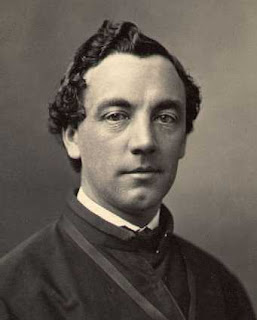 Patrick Francis Healy, S.J. (1834-1910), as seen during his tenure as President of Georgetown University, 1873-1882. Georgetown students unaware of his background called him “the Spaniard.”

A Jesuit’s formation program can go well over a decade. Patrick Healy’s began in 1850, and it took him back to Holy Cross as a teacher. Students there remembered him, and not always favorably. He wrote a friend that “remarks are sometimes made… which wound my very heart. You know to what I refer.” Later he studied in Europe, earning a doctorate in philosophy, and he was ordained in Belgium in 1864. (The ordination ritual included the words, “I no longer call you slaves but friends.”) Back in America, he was assigned to Georgetown University. 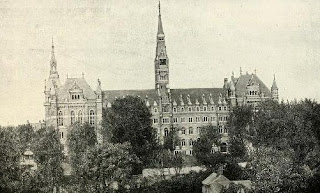 Healy Hall, Georgetown University, as seen in the late 1800’s.

Many alumni, some from slaveholding families, recalled his brilliance. They didn’t know his story, but his fellow Jesuits were aware of what they called “the problem related to his background.” Nevertheless, in 1873, he was named president of the largest Catholic college in the United States. Over nine years, he modernized the curriculum, expanded the law and medical schools, started a campus building spree, and traveled nationwide on fundraising projects. Today Georgetown remembers him as its “second founder.” 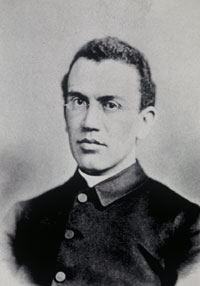 Father Alexander Sherwood Healy (1836-1875) as seen not long before his death. He was always known by his middle name.

Fitzpatrick wasn’t abandoning Sherwood; he just realized the limits of what he could do for him. Sadly, the young priest died at thirty-nine in 1875, as pastor of a large Boston parish. Over 150 priests and several bishops attended his funeral.

In a country where the smallest amount of African ancestry defines one as Black, the Healys had to spend their lives “passing for white” (as their biographer James O’Toole writes). One can only imagine the toll it exacted. James was subject to bouts of depression, and Patrick burned himself out before age fifty. Perhaps the saddest part is that they not only accommodated themselves to American racism; they internalized it. In time, they stopped thinking of themselves as anything but white, and so did their peers.

But when news of their background was made public in the 1950’s, a Georgetown student defaced the portrait of Patrick Healy hanging on the all-white campus. It would be another decade before the university admitted African-American students. Today the university celebrates Healy’s heritage as a symbol of its commitment to diversity. At the same time, it overlooks the fact that during his lifetime, great pains were taken to keep that information from ever reaching the public.

The Healy story mixes triumph with tragedy: triumph over the odds, tragedy in that they had to deny their very selves in the process. To overlook this fact ultimately does them a disservice, and offers an incomplete portrait of the African-American Catholic experience. To deny the Healy family history its full richness is also to deny the very meaning of the word that defines Roman Catholics, “universal.”

February 4, 2011 Article on Xavier High School, Manhattan, 1898
Recent Comments
0 | Leave a Comment
"Wow! I didn't know about that Statement from the US Bishops. The fact that they ..."
Florence Ziegler “It’s About Time They Got Here”:  Catholics ..."
"Very interesting. Why did the Jesuits change the name of the school from a saint's ..."
Kristin Nealon Wilson Ocds Who’s Buried in Catholic Cemeteries?
"It is a joy to that you are back blogging. Thanks for the reference to ..."
Joe A Church Historian’s First Communion
"Thank you for all your enjoyable, informative posts on Church history. I agree that the ..."
Kathleen Brady Looking at the Scandals– A Church ..."
Browse Our Archives
get the latest from
Catholic
Sign up for our newsletter
POPULAR AT PATHEOS Catholic
1