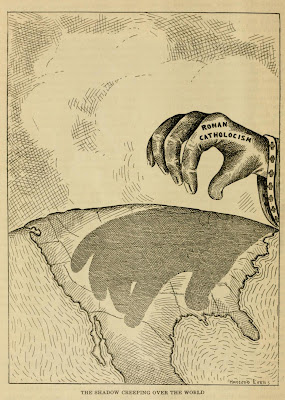 TO PURIFY POLITICS.
That is the Sole Aim and Object of the A.P.A.
State President Huddleston on the Organization’s Work.


Rev. Dr. Huddleston, State president of the A.P.A., delivered an address in Hamilton Hall yesterday before an audience comprising hundreds of the most intelligent people in the community. He was introduced by Mayor Davie, at whose request the audience sang “America” with great enthusiasm. “Sweet and Low” was sung in an expressive manner by the Golden Gate Quartette.

Mr. Huddleston claimed that the A.P.A., of which he is proud to be a member, had been misrepresented and that it had been said that the object of the association is to make a religious contest in politics. Such, he claimed, is not the purpose of the A.P.A.

“It is,” he said, “designed with a view to getting religion out of politics. In addressing myself to this question I shall speak of organizations and not individuals. We do not single out Catholics because they are Catholics, but because they are an organization striving for union between church and state. I am as much opposed to any other religious order when it becomes an organization and a factor in politics. We must keep the church and state separate. It is suicidal to affect a marriage between the two. Our constitution says that no sectarian institution shall be supported by public moneys. A sectarian institution, we understand, is one that teaches tenets, doctrines and beliefs of its own and admits no attachees but those of its own organization. When the state supports such an institution it supports a sectarian institution. Does the State do it? Over in San Francisco is the Magdalene Society, composed of Roman Catholics, and their direction there is paid $15 per month by the State for every inmate, and then they make the inmates work for nothing. The product of their labor is put in competition with the product of your labor. It is unmanly; it is unjust; it is unconstitutional, and so long as this continues the State is paying for the support of sectarian schools. Some $150,000 is paid every year for the support of State officers, as against the $212,000 of State money for the maintenance of Roman Catholic charitable institutions. If this money is to be given let the State take hold of and introduce its non-sectarian principles.”

SATOLLI’S WORK
“Perhaps some people might say to me here, why do you single out a Roman Catholic running for office? He is not responsible for the acts of the Catholic hierarchy and the encroachments of the Catholic church. I will say in reply to such a one that it is not possible to drive the Catholic organizations out of politics unless you defeat the individual. Let the Roman Catholic church cease to be found on the floors of the Senate and Congress; let her Satolli cease to dictate what her government shall be; let her take her hands out of our treasuries; let her stop her interference with our schools and we will let the individual alone. Just as long as she has a Satolli in Washington, just so long as she makes attacks on our public school system, just so long will the A.P.A. strike straight from the shoulder and below the fifth rib of every Roman Catholic. I would not belong to it if it did not. People will find that we mean business.”

“We have had for too long governments of the bosses, for the bosses and by the bosses,” said Mr. Huddleston. “We have had Chris Buckley, Dan Burns, Phil Crimmins and now Philip Martin is coming into notice. At the last election engineered by Buckley not one of the successful candidates could represent the people and owe their election to the people. They owed their elections to the bosses and were in their positions to serve the bosses instead of the people. It is our principle to defeat such things as this. And here someone might ask why we don’t come out from behind closed doors and do it openly. I say because secrecy is the only thing to conquer by. Tammany was not defeated in an open campaign. Though movement after movement was made against them openly they all failed. While Tammany was in power nearly all the officers in New York were Catholics. (The doctor here read a long list of those to substantiate his statement.) And they were only defeated when the A.P.A. went into the campaign as a secret organization with the same men who for twenty years before had been fighting them.”

The speaker then said that the A.P.A. stands for a rigid enforcement of the naturalization laws and does not believe that the right of franchise should be given to anybody until he can read and write the English language and has read the United States constitution and the constitution of the State. He also encouraged those who feared a loss of Catholic trade because of being connected with the A.P.A. to take courage because such a boycott could not affect them because Catholics never trade with those who are not Catholics and have not done so since the fourteenth century. He then closed with a brilliant peroration, admonishing everyone to be in line on the Fourth of July.

Mayor Davie then made an eloquent and taking address, endorsing all that the reverend lecturer had said, and giving expression to may forcible facts and ideas of his own.

NOTE
The American Protective Association was founded in Iowa in 1887 to curb Catholic influence in public life. It largely died out by the end of the 1890’s. But through the 1910’s, the terms “A.P.A.” and “A.P.A.er” were used by Catholics in referring to any kind of anti-Catholic person or activity. The Satolli referred to above was Archbishop Francesco Satolli, who had just been the first Apostolic Delegate to the United States, basically the Pope’s ambassador to America. (It wasn’t until 1984 that the United States reciprocated.) Anti-Catholics feared that his arrival was a prelude to an attempted Catholic takeover of America.

May 17, 2011 This Week's Column at Patheos
Recent Comments
0 | Leave a Comment
Browse Our Archives
Related posts from McNamara's Blog