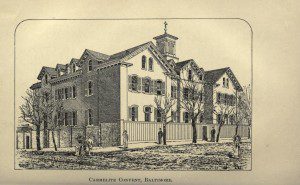 The Discalced Carmelite Nuns (O.C.D.) were the first community of women religious founded in the thirteen United States proper, arriving at Charles County, Maryland, in 1790. It was also the first Roman Catholic monastery in the new nation. Four Carmelite Nuns, Bernardina Matthews (along with her nieces Mary Eleanora and Mary Aloysia Matthews) and Clare Joseph Dickinson. All of them had joined the Carmelites in Europe. All but Dickinson, a native of England, were Maryland-born Catholics. Earlier Sister Bernardina’s brother, a priest in Maryland, had written to her: “Now is the the time to found in this country, for peace is declared and religion is free.”

In October 1790, they dedicated their monastery to the Sacred Hearts of Jesus, Mary and Joseph. It was based on a farm in Port Tobacco, Maryland. The farm was worked by slaves brought in from the plantations of the Maryland gentry. At that time, women entering religious communities were expected to bring a dowry with them. Because many of the early American Carmelites came from slaveholding families, thhe slaves served as a dowry. One of the Nuns described community life there in the early 1800’s:

We are twenty in community… Without rent or revenues we depend on Providence, and the works of our hands, productive of plentiful crops of wheat, corn, and tobacco, a good mill supplying our large and healthy community with every necessary of life… We raise a stock of sheep, yielding a considerabl quality of wool, black and white, which we spin and weave, to clothe ourselves and Negroes. The situation of our monastery is pleasant, rural, and healthy, being on top of a high hill. We have excellent water and a very extensive enclosure, containing nearly three acres of land. The place is solitary, suitable to our eremitical Order.