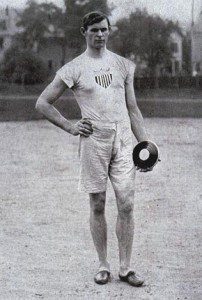 As the 2012 Olympics gets underway, it seems appropriate to focus on one of the first American participants, a man deemed “one of the greatest athletes” America had ever known. Between 1904 and 1908 he won nine Olympic medals: four gold, three silver, and one bronze. He competed in the discus throw, stone throw, long jump, the Greek discus, and shot put. Born in County Mayo, Ireland, he grew up in New York City. There his athletic ability came into focus as he joined the famed Irish American Athletic Club. Founded in 1898 in Queens, the club produced numerous Olympic athletes (Irish and non-Irish) and provided first-generation Americans an alternative to the elitist New York Athletic Club. At 6’3″ and 194 lbs., Sheridan was one of the finest athletes in the club. From 1906 until his death of pneumonia in 1918, he was a member of the New York Police Department and served as a personal bodyguard to the Governor of New York. He was buried at Calvary Cemetery in Queens. In addition to his Olympic medals, Sheridan won twelve national, over thirty metropolitan and Canadian championships. At the 1908 Olympics in London, eight of the thirteen American victories in track and field events were won  by members of the Irish American Athletic Club.