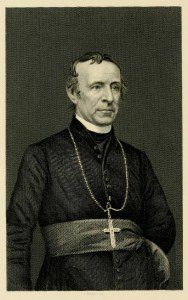 Sermon on the Laying of the Corner-Stone of the Church of Our Lady of Immaculate Conception, Star of the Sea, Brooklyn, N.Y., July 17, 1853.

MY DEAR BRETHREN— I can have no hope that my voice will be able to reach the boundaries of an assemblage as this which I see before and around me.  With silence on your part, the few words which I have to address you may be heard to a certain distance; but should there be the least disturbance, it will be impossible for you to hear me, although I should wish my voice to be trumpet-loud, so that you might know the sentiments which this auspicious occasion has awakened. Who will say henceforth that the love of God, the faith of God’s Church, the zeal for His glory, are diminished on the soil of freedom and liberty? Who will dare to say so, seeing as I see such a multitude of people as now surrounds me? And what, dear brethren, has brought you to this scene? Was it mere curiosity? No doubt some have been attracted even by curiosity to come here, but who knows whether they shall not carry away with them something more solid, something more advantageous to themselves, than the gratification of an appetite for novelty. We have just laid the coner-stone of a Church, not a temple, for the Pagans had temples, but we have none. We have a Church composed of many buildings, if you will, of many multitudes, if you will, but still only one Church, neither more nor less; and therefore this is not the laying of a new temple, or a mere temple of worship. It is that, if you will, but it is more; it is part of the universal and everlasting Church which Jesus Christ founded on earth, and which is called the Catholic Church. It is one Church; the worshippers in that one Church being of various lineage, various climates, various colors and complexions even, but still the people of one divine, universal, and eternal Church. And if there could be, by possibility, an edifice on earth capacious enough to hold them all– one single Church– they would find themselves perfectly in harmony as to every rite of worship, and a second Church would not be necessary.

NOTE: The above is only an excerpt from a sermon which has had to be edited for blogging brevity.