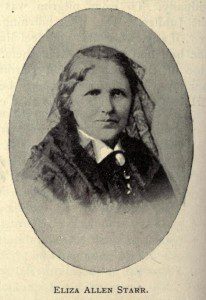 Born to a distinguished New England family, Eliza Allen Starr grew up “in an atmosphere of culture and refinement.” It was said that she inherited her love of literature from her family. After attending some of the region’s finest schools, she taught drawing in Brooklyn. During the ensuing years, she became acquainted with Roman Catholicism through a relative who was a convert. On December 3, 1854, Boston’s Bishop John B. Fitzpatrick received her into the Church. One biographer notes that she encountered “misunderstanding and humiliation” at the hands of friends and relatives, but “she accepted the faith a joy and enthusiasm that, as in the case of all true converts, only increased with the years.”

In 1856, she moved to Chicago, where she remained for the rest of her life. At the World’s Fair, she won a medal for her artwork. She also began writing books (several of which she illustrated) on art, particularly Christian art, a subject to which she devoted the rest of her life. Periodically she traveled to Europe; back in America, she lectured nationwide on Christian art beginning with the Catacombs. In time, Eliza became fascinated with the figure of St. Francis of Assisi, whose life inspired many great works of art. One critic said of her lectures:

How many of us would have thoroughly appreciated Turner, for a Ruskin? How many have gazed on Giotto’s Tower or Il Duomo, and not understood them until interpreted by the gentle, spiritualized woman, who has studied them with the breath of life of culture, and the purity of a mind refined by faith and prayer?

In addition to her lectures, Starr also wrote lyrics for use in churches, and lives of the saints for “the faithful youth of the Catholic Church, to whose interests I am proud to devote my life.” One biographer writes: “Poetry, art, and the saints most engaged her pen.” She also promoted the study of the liturgy among Catholics, “a return to these fountains of living water,” as a way of reinvigorating Catholic life.

Her home in Chicago,  which she named St. Joseph’s Cottage, was said to be a “veritable art museum.” One bishop said of her writings: “I consider it to be the duty of educated American Catholics to be acquainted with these beautiful works, so full of the fragrance and sweetness of true Christian art.” In 1885, Eliza Allen Starr received the University of Notre Dame’s Laetare Medal, the highest award offered to an American Catholic layperson. She was the first woman to be so honored. That same year she became a Third Order (or Secular) Franciscan in 1885. (These are laypeople who strive to live the Franciscan charism in their daily lives.) A daily communicant, she lived down the street from Chicago’s Holy Name Cathedral ands spent an hour there every day before the tabernacle. As she wrote a friend:

Behold the wonderful privilege I enjoy, to live so close to our dear Lord in the Holy Eucharist and to be ever reminded of His presence by the glow of the sanctuary lamp, even in my own home.

At the time of her death in 19o1, many of her Protestant friends and neighbors asked whether she would be canonized. One author responded: “Who can say? But meanwhile, thank God for the uncanonized saints around us.”

July 24, 2012 Father Anthony Ciampi, S.J. (1816-1893)
Recent Comments
0 | Leave a Comment
Browse Our Archives
get the latest from
McNamara's Blog
Sign up for our newsletter
POPULAR AT PATHEOS Catholic
1