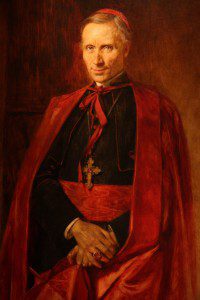 TWENTY-FOURTH SUNDAY AFTER PENTECOST.  “CHRIST THE ONLY ENDURING NAME IN HISTORY AND THE GREAT REFORMER OF SOCIETY.” Matt. xxiv., 15-35. “Heaven and earth will pass away, but my words will not pass away.”

Jesus Christ is the only vital and enduring name in history. He exerts today a paramount influence on the political and social, as well as on the moral and religious world, such as was ever wielded by any earthly ruler. In contrast with the founders of empires, of systems of religion, and of the framers of laws, we may say of Him in the language of Holy Writ: “They shall perish, but Thou shalt remain, and of them all shall grow old as a garment. And a vesture Thou shalt change them and they shall be changed, but Thou, O Christ, are always the self-same, and Thy years shall not fail.” Kings and emperors have sought in various ways to perpetuate their name and fame. But their deeds and personality have faded away in the lapse of ages; or they have left after them the shadow of a once mighty name, which now invokes no enthusiasms and inspires no lofty sentiments. Other leaders have captured cities; Christ has captured the citadel of the heart. Christ, then, is not merely a man of history. He is not like other great men who have appeared on the theater of life, have played their part and have disappeared from view. He is not a meteor that flashed across the firmament of the world and was suddenly extinguished. No; He is the Sun of Justice shining on men down through the ages, enlightening their minds, warming their hearts, and causing the fruits of sanctification and grace to grow in their souls. Countless multitudes of hungering souls are following Our Saviour today, as they followed Him of old into the desert, and are receiving from Him the bread of heavenly consolation. Oh! How many a desolate heart cries out to Him in its anguish with Peter and says: “Lord, to whom shall we go but Thee! Thou hast the words of eternal life.” Christ is the only living force that can regenerate society. He is the only genuine social reformer. The nation is sick, and the malady is all the more dangerous because the patient is unconscious of the disease. We are so intoxicated by material prosperity that we are become indifferent to the higher aspirations of the soul. If Christianity is the highest type of civilization and who can deny then is it not true that we are retrograding instead of advancing on certain lines? Thou, who art the Father of Light and the Dispenser of every good and perfect gift, cast a ray of Thy Divine Light on our beloved country, that the spiritual and moral growth of the nation may keep pace with its material prosperity. Teach us to realize that saving knowledge consists in knowing and worshipping Thee, “the only true God and Jesus Christ Whom Thou hast sent.” Teach us that he alone is free who enjoys the glorious liberty of the children of God, and that freedom which delivers us from the bondage of sin; that he alone is truly rich who abounds in grace and righteousness; that he alone is great who is virtuous. Abov all, may we learn from Thee that true national honor and glory and genuine imperialism is found in the empire of the soul over its passions, and “that greater is he who conquereth himself than he who taketh cities.”

James Cardinal Gibbons, Discourses and Sermons, for Every Sunday and the Principal Festivals of the Year (Baltimore: J. Murphy Company, 1908), 518-525.

Official Catholic Church Teaching on the...
The Shoeless Banshee: Meanderings Beyond the Pale
Related posts from McNamara's Blog