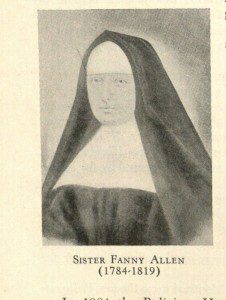 Fanny Allen, daughter of Ethan and Frances Allen, was born in Sunderland, Vermont, November 13, 1784. She went to Burlington with her parents in 1787 when General Allen established his family on a farm, which is now Ethan Allen Park. Ethan Allen was one of the members of the Onion River Land Company, and was consequently one of the proprietors of the Winooski Valley. The land on which stand the Fanny Allen Hospital and Fort Ethan Allen, was included in the original grant. In 1805 Fanny asked and obtained permission from her parents to go to a Montreal convent to complete her education. There she sought instruction in Catholic doctrine, and was received into the Church. On September 29, 1808, she entered the novitiate of the Religious Hospitallers of St. Joseph, at the Hôtel-Dieu in Montreal. Her example, her piety, and her prayers contributed to the conversion of many to the Catholic faith. Sister Allen died September 10, 1819, and her remains lie under the chapel of the Hôtel-Dieu in Montreal.

NOTE: Although she wasn’t the first American woman to enter Catholic religious life, she was the first convert in New England to do so.

October 24, 2012 Lecture on the Church and Western Civilzation, New York, 1866
Recent Comments
0 | Leave a Comment
Browse Our Archives
Follow Us!

Go Ahead. Take Down Statues of...
Public Catholic
Related posts from McNamara's Blog