Lecture on the Church and Western Civilzation, New York, 1866 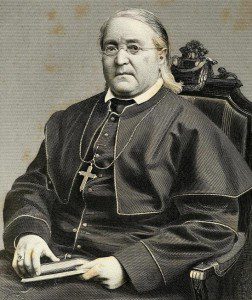 THE CHURCH THE CIVILIZER OF THE NATIONS. Lecture by the Most Reverend M.J. Spalding, Catholic Archbishop of Baltimore. (The New York Times, February 7, 1866)

Late evening Rev. M.J. Spalding, the Catholic Archbishop of Baltimore, and spiritual head of the Catholic Church in this country, delivered a lecture on “The Church the Civilizer of Nations,” at the Church of St. Stephen, in Twenty-eighth Street. The lecture was delivered for the benefit of the poor under the charge of the Conference of St. Vincent de Paul, and, as shown by the immense congregation gathered in the large church, the response to the charitable appeal was most successful in its result. Before the commencement of the lecture some choice selections were played upon the organ, and a fine contralto solo delivered by a member of the choir. Bishop Spalding arrived attended by a large number of clergymen, and ascending the rostrum, said: When I accepted the invitation of the Conference of St. Vincent de Paul to lecture for the benefit of the poor under their charge, I little thought then that this edifice would be draped in mourning for the illustrious pastor, whom you have so lately lost; but, alas! In this uncertain world of ours, and such is the lesson taught us daily that there is nothing real, nothing true, but Heaven. The reverend gentleman then proceeded to define at the outset of his lecture the true meaning of civilization as distinct from that claimed for the Chinese and other pagan nations, showing that Christianity was the only true civilizer. Paganism knew no charity—never built a hospital, never raised an asylum; its institutions, one and all, bare down upon the poor for the aggrandizement of the rich. Civilization was coincident with Christianity, outside of this there is not, nor ever was, one worthy of the name. Who laid the foundation of this civilization but those who established Christianity—that Church by which civilization has been nursed and fostered, and which deserves the eternal gratitude of all nations who owe their progress to their conversion. Christ instructed his disciples—“Go teach all nations;” and they went forth, the poor uneducated fishermen, and with all their disadvantages, poverty overcame riches—ignorance overcame learning—the simple eloquence of Christ’s followers overcame the lofty rhetoric of Greece and Rome. Eusebius, the father of Church history, states that when, by the election of Matthias, the Apostles were complete in number, they divided the nations among them, each to his province of conversion, and then raised the cross of Christ, and with it rose the dawn of civilization. The blood of the martyrs was the seed of Christianity; martyrdom did not stay its progress, and we read in Justin, a writer of the second century, that even in his day the Christian faith had far extended itself beyond the reach of the Roman eagles, and that in Tertullian Christianity was already in the Senate, in the schools, and in the marts of trade, nothing being left to paganism but the temples. The Cross was terror and confusion to the pagan; now it is the banner, and destined to be so forever, of all conquering civilization. The learned lecturer then proceeded to show the influences of Christianity on the nations from century to century, and the progress of civilization under its fostering care, and the ultimate result in the enlightened civilization of the present day.

NOTE: Born in Kentucky, Martin John Spalding (1810-1872) was an accomplished preacher and author. Ordained in 1834, he spent much if his priesthood in his native Kentucky. In 1848, he was named Coadjutor Bishop of Louisville and became Bishop in 1850. He served there until 1864, when he was named Archbishop of Baltimore. He particpated in the First Vatican Council in Rome (1869-1870). His death occurred on February 7, 1872. His relatives included Sister Catherine Spalding, one of the foundresses of the Sisters of Charity of Nazareth (1793-1858), and Bishop John Lancaster Spalding (1840-1916), first Bishop of Peoria.