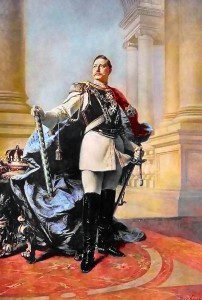 Special to the New York Times

RICHMOND, Va., June 16— The Sisters of St. Edith’s Academy, near Manassas, have received from Emperor William a large oil painting of himself with the Emperor’s autograph. The academy is under the direction of Benedictine nuns, most of whom are German. They recently wrote to the Kaiser, congratulating him on his jubilee, and asking him for an autographed photograph. Instead of a photograph, the Emperor sent a fine oil painting.

NOTE:  St. Edith’s Academy, founded by the Benedictine Sisters of Virginia in 1894, closed in the early 1920’s. The school was relocated to Richmond in the early 1920’s as St. Gertrude’s Academy. There’s a pretty good chance the Sisters got rid of the picture after the U.S. declared war on Germany in April 1917.

October 8, 2012 St. John the Baptist Church, Manhattan (1840)
Recent Comments
0 | Leave a Comment
"Wow! I didn't know about that Statement from the US Bishops. The fact that they ..."
Florence Ziegler “It’s About Time They Got Here”:  Catholics ..."
"Very interesting. Why did the Jesuits change the name of the school from a saint's ..."
Kristin Nealon Wilson Ocds Who’s Buried in Catholic Cemeteries?
"It is a joy to that you are back blogging. Thanks for the reference to ..."
Joe A Church Historian’s First Communion
"Thank you for all your enjoyable, informative posts on Church history. I agree that the ..."
Kathleen Brady Looking at the Scandals– A Church ..."
Browse Our Archives
get the latest from
Catholic
Sign up for our newsletter
POPULAR AT PATHEOS Catholic
1