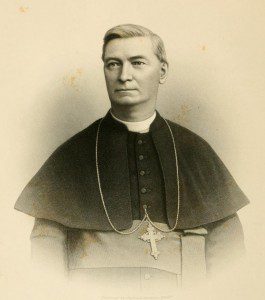 John J. Kain was born in Martinsburg, Berkeley Co., West Virginia, on the 31st of May, 1811, the only son of Jeremiah and Ellen Murphy Kain, who emigrated from the neighborhood of Macroom, in the county of Cork, Ireland, and married in this country. Their son first attended the academy then directed by the present Bishop of Wilmington, and, seeking to serve God in His sanctuary, obtained admission to the Preparatory Seminary of St. Charles, where, after a five years’ course, he was graduated in 1862. His philosophical and theological studies he pursued in St. Mary’s College, Baltimore; and he was ordained by Archbishop Spalding on the 2d of July, 1866. His field* of priestly labor embraced the valley of Virginia from the Potomac to Mount Jackson, and centred at Harper’s Ferry. Its extent may be seen in the fact that for a considerable time he had charge of the Catholics living in eight counties of West Virginia and four in Virginia. He then obtained an assistant to share his arduous labors. During his administration of this large district he repaired the churches at Harper’s Ferry and Martinsburg, which had been greatly injured during the Civil War, and rebuilt those which had been destroyed at Winchester and Berkeley Springs. On the 21st of February, 1875, this laborious priest was elected Bishop of Wheeling, and was consecrated by Archbishop Bayley on the 23d of May, his aged mother, who had attained the age of fourscore, witnessing the exaltation of her son. At the beginning of the year 1885 the diocese of Wheeling contained thirty-four priests, who attended sixty-two churches, eight chapels, and forty stations. The Catholic white population was estimated at about twenty thousand. There were thirtyfour academies and schools, a hospital and asylum under the care of Visitation nuns and Sisters of St. Joseph.

John Gilmary Shea, The Hierarchy of the Catholic Church in the United States, Embracing Sketches of All the Archbishops and Bishops from the Establishment of the See of Baltimore to the Present Time (New York: Office of Catholic Publications, 1886), 391.

NOTE: John Joseph Kain became Archbishop of St. Louis in 1893, and held that office until his death on October 13, 1903.

January 3, 2013 Holy Name Entertainment, Brooklyn, 1878
Recent Comments
1 Comment | Leave a Comment
Browse Our Archives
get the latest from
Catholic
Sign up for our newsletter
POPULAR AT PATHEOS Catholic
1