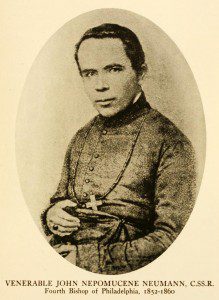 FIRST AMERICAN SOON TO BE PLACED, AFTER YEARS OF SOLICITATION BU U.S. CATHOLICS, IN THE CALENDAR OF SAINTS (The Brooklyn Eagle, February 16, 1902, 44)

Roman Catholics of the United States, who have been striving for many years to secure the canonization of a strictly American saint seem destined at last to have their wish gratified, for it is understood that the Bishop of Philadelphia will soon announce that the beatification of John Nepomucene Neumann is to take place within a few weeks. Although American Catholics have presented the names of no less than four eminently suitable candidates for sainthood and have never ceased to press their claims for recognition with most energetic persistence, this is the first occasion on which they have felt that there was much justification for the hope that their desires were at last to be realized. The announcement of Bishop Neumann’s beatification, which is so soon to be made, is one of the most important of the many preliminary steps that must be taken before the process of creating the first North American saint can be completed.

At the present time the only name that the new world has contributed to this roll of honor of the Church is that of St. Rose of Lima, a Dominican nun whose sanctity was so well recognized by those who had been acquainted with her holy life that the agitation for her canonization actually commenced within a few years after her death, in August, 1617. Fair of face and fascinating in manner, everybody loved her and the people, likening her grace and beauty to the queen of flowers, insisted upon changing her name, Isabelle, to that of Rose, and it is by that title that she has become known as one of the most perfect examples of charity, piety and devotion to her faith that the world has to offer.

While the Sacred Congregation of Rites at Rome is examining into the lives of men and women of all ages one of its most important missions at the present time is to show that the age of holy living has not passed, and it is in this connection that it will give the earliest possible attention to the claims of the four candidates for canonization that have been presented by Catholics in the United States. To ordinary layman, the man engrossed with worldly things, there may be something incongruous in the idea that the bustling nineteenth century should have produced characters sufficiently holy to be sufficiently worthy to occupy a place in the list of canonized saints, and yet there is little reason to believe that the Sacred Congregation will not be able to prove, beyond any possibility of doubt, that such men and women have lived and died in sanctity, undisturbed by the peculiarly worldly influences of modern life.

One of the most striking of the several examples which show that modern existence and saintly living are not entirely incompatible is that which may be found in life of the late Bishop Neumann. He was born in the ancient city of Prahatitz, in Bohemia, on Good Friday, March 28, 1811. His father, a stocking weaver, while not wealthy, was a man of sterling principles, charitable and religious, and the nature if the early training which his son must have received may be judged from the fact that, of six children, the three girls and two of the boys embraced the religious life.

In 1831 young Neumann entered the seminary at Budweis, but, before his theological studies were studied, he volunteered for the American missions, arriving in the this country almost penniless and a stranger, on the morning of Corpus Christi, 1835. The same day he reached New York, however, he succeeded in obtaining and interview with Bishop Dubois, who was glad enough to accept his services, a German priest being needed in this diocese. For a year, therefore, or until he was prepared for his higher orders, the young priest gave instructions in Christian doctrine to the German congregation of St. Nicholas Church, but on June 25, 1836, he was ordained a priest in old St. Patrick’s Church, and from that day, his active missionary labors commenced.

The story of the young priest’s early struggles constitutes one of the most interesting chapters in the religious history of New York. It was the time when there was comparatively little money at the disposal of the Church, and the few Catholics outside of New York were so widely separated that the missionary’s parish seemed to be almost without boundaries. Father Neumann’s first mission station, for example, was Williamsville, but from there he also attended many other places, including North Bush, five miles distant; Lancaster, six; Transit, six; Batavia, forty; Sheldon, twenty, and Niagara, fifty miles distant, while the financial difficulties which he was compelled to overcome may be imagined from a glance at his writings, in which  he speaks of “living at North Bush with a native of Lorraine, who, in consideration of payment in the next life, furnishes me with board and lodgings in this,” or, when he says: “I have never yet suffered from hunger, and, as for clothes, when one garment grows too shabby to wear some one or other  of my good people provides me with another.”

Four years of such hardship were sufficient to leave Father Neumann sadly broken in health, so in 1840, he joined the Redemptorists, being the first member to be professed in America, and on March 5, 1844, he was elected, in spite of all his protests, superior of the order. Always his health was delicate, for he had contracted a chronic wasting fever, and yet at no time did he find any labor too great for him to undertake. He also made it a practice to fast frequently all day and it was no rare thing for him to wear an iron cincture whose points entered his flesh, making painful wounds.

In March, 1852, Archbishop Kenrick, whose confessor he had long been, informed him that the Pope had determined to appoint him Bishop of Philadelphia. On Good Friday, 1852, Father Neumann became Bishop Neumann, and although from that day all manner of great honors were showered on him nothing tended to alter his character. No task was too mean for him to perform; no person so vile that he would not strive personally to improve his condition. Upon his elevation to the bishopric he was dispensed from the obligation of poverty which he had assumed on becoming a Redemptorist, and yet the dispensation did not result in the accumulation of wealth on his part, for his purse was always open, and, when it was empty, he did not hesitate to part with any article of value that he might have to relieve the needy. He even gave his clothing to the poor, and, as the result, was often shabbily clad,while his support of the sisterhoods, the orphan asylums and struggling congregations in his diocese was his greatest delight as long as he lived. He died on January 5, 1860, and his body was interred in St. Peter’s Church.

If the process of canonization was not so deliberate and complicated, Bishop Neumann would undoubtedly have long since been venerated as a saint. Rome never acts hastily in such matters, however, and, as the result, nearly fifteen years have elapsed since the first process tending toward his canonization was undertaken by Archbishop Ryan. Accordingly the authorities of the Philadelphia diocese have submitted to Rome much interesting data tending to show that a number of persons have been cured of bodily afflicitions by visiting the tomb of Bishop Neumann. In the meantime Bishop Neumann’s tomb has been visited by throngs of believers and unfortunately, afflicted persons may be seen there daily, praying by the hour.

January 17, 2013 Father Augustine F. Hewit, C.S.P. (1820-1897)
Recent Comments
0 | Leave a Comment
"Thank you for all your enjoyable, informative posts on Church history. I agree that the ..."
Kathleen Brady Looking at the Scandals– A Church ..."
"Such laws might have done Ireland some good, in the case of the Magdelenes. The ..."
HematitePersuasion “A Million Foreigners, Most of Them ..."
"sounds like a total waste of time"
kyuss, cannabis farmer Holy Name Rally at Ebbets Field ..."
"This is a marvelous joining of three important Brooklynites who happened to have gone to ..."
Joe Three Giants of Brooklyn Catholicism
Browse Our Archives
Follow Us!

Do it for One
The weight of the need in this world can feel suffocating. There...
view all Catholic blogs
What Are Your Thoughts?leave a comment
Copyright 2008-2020, Patheos. All rights reserved.